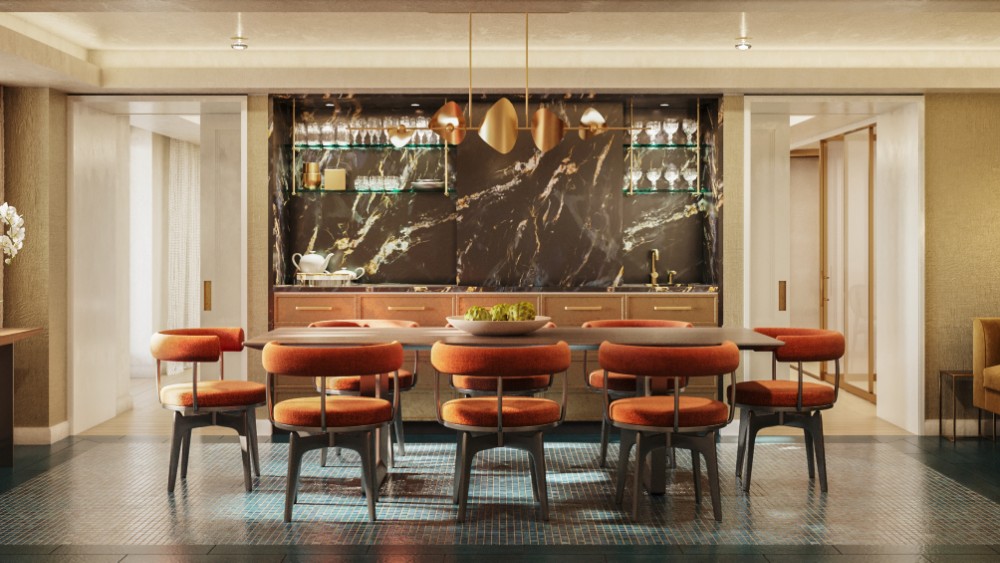 New York City’s West End Avenue has long been known for its diverse architectural styles, like Beaux Arts, Gothic, Georgian and Renaissance Revival. But while many buildings in this residential area have been meticulously preserved, a select few stand out for their ability to retain the architectural charm of a bygone era while appealing to today’s luxury buyer.

One of those is 393 West End Avenue, a 16-story landmark prewar building first designed in 1927 by Goldner & Goldner on the corner of 79th and West End Avenue. The building is located within the West End Collegiate Historic District on New York’s Upper West Side and has been modernly transformed into a collection of 75 residences by architecture firm CetraRuddy and development firm Rabina. Sales have officially launched for the new condos, with prices starting at $1.23 million, and we got a first look at the stunning interiors, along with insight into the conversion process.

The kitchen in a residence  Alden Studios

Both involved firms, each well-versed in historic preservation projects, were taken by the building’s Collegiate Gothic-style architecture and 1920s design features. “This was an era in American architecture where there was a renaissance of interest in numerous historic architectural styles and eclectic details,” says Nancy J. Ruddy, founding principal of CetraRuddy. “Our building exists within the prestigious and historic neighborhood of the Upper West Side known for its gracious row houses and majestic ‘new era’ apartment living buildings, which became fashionable in the first quarter of the twentieth century. 393 West End is designed in the Gothic Revival Eclectic style, which consists of an elegant taut form accentuated by highly ornate detailing that is an eclectic mélange of Gothic, European and Medieval detail translated to the new world. The richness of its ornament is organic, with sumptuous curving details of fabric swags and flora translated into stone and bronze.”

At its entrance, the building features a restored limestone portal with a bronze and glass marquee and antique bronze entry doors with lion medallions. Other details have been carefully replicated to accurately evoke the feeling of the 1920s; these include a nickel leaf ceiling, oyster lacquer-finished paneling, a custom mosaic polychrome stone floor and a sculpted concierge desk made of marble.

However, while the entryway and lobby might harken back to this time, the residences are decidedly modern. Ruddy says that when they began the project, the interior elements from the 1920s didn’t exist, and the firms took cues from the intricate details on the building’s exterior to reimagine what the interiors might look like at that time.

“These elements create a historically respectful viewpoint executed with today’s glamour,” she says. “The goal was always to bring the magic back to the building.”

CetraRuddy, which approaches each project with their own research, worked with preservation and conservation specialist Higgins Quasebarth & Partners to successfully reimagine the entry facade, windows and penthouse. The residences, however, are the heart of the building, Ruddy says.

“They were designed with a harmony between the spirit of historic sensibility but with language in a modern vernacular,” she tells Robb Report. “We began with the guiding principles of what we all love about prewar planning, such as entry foyers, grand entertaining spaces, more private family and bedroom spaces and commodious storage, laundry rooms, and kitchens that become the hearth and center of the home. These spaces are finished with unique combinations of materials that are juxtaposed to create distinctive patterns and reflectivity. Hand cut stone, rubbed antique metals and stones from specialized quarries from around the world were hand-selected by us to create a sense of warmth and craft that can be felt in every room.”

Units range from one to four bedrooms and are priced between $1.23 million to $7.1 million. Each has a gracious, open floor plan with French Chevron wood flooring, custom cabinetry, naica quartzite countertops and backsplashes and a tonal neutral color palette. Luxury materials include Calacatta gold marble mosaic floors, designed in a diamond pattern with a polished nickel trim, as well as Breccia Capraia marble, Calacatta black marble accents, white lacquer on the vanities and so much more.

The residential qualities aren’t overdone and are exceptionally warm. A highlight for future owners will absolutely be the primary suite and bathrooms, which were inspired by Parisian dressing rooms. Residences are also filled with light thanks to large windows and are accentuated even further by the units’ elegant, high ceilings. Views per unit vary, and may include vistas of Hudson River.

Residents also have access to 4,000 square feet of shared amenities, including a Great Room with banquettes that connects to a landscaped courtyard, and a Club Room with a private bar; as in the era in which the building originated, intimate soirees are encouraged here and the space can accommodate a small group. As this is a very family-friendly neighborhood, kids’ amenities include a forest-inspired children’s playroom, called the Cottage, as well as a junior lounge with a gaming station and teen lounge. There is also a fitness center with a private movement studio for residents who seek more privacy during their workouts or desire a personal trainer.

The bathrooms were inspired by Parisian dressing rooms.  Alden Studios

Making the the building even more notable is the fact that this is likely the neighborhood’s last condominium conversion, meaning few will be able to live in a renovated historic building such as this.

“In June 2019, New York State implemented a new law requiring that 51% of tenants in a rental building agree to buy their unit in order for a condominium conversion to take place,” says Stephen Kliegerman, president of Brown Harris Stevens Development Marketing. “Since then, there has been a steep drop in the number of condo conversions that have been filed, as it’s very unlikely that a 51% majority can be reached. The conversion plans for 393 West End Avenue were filed prior to this law taking effect.”

More details on units and sales can be found on the 393 West End Avenue website; penthouse layouts and pricing will be revealed at a later date.