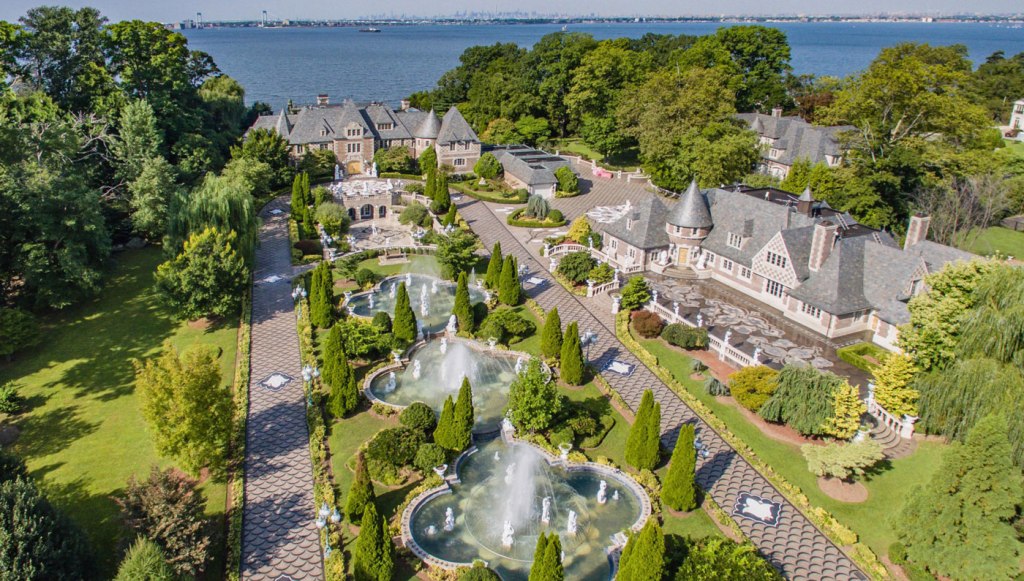 Spoiler alert: If you want to own a piece of cinematic history, you can now purchase homes that starred in movies and shows ranging from Empire to The Beverly Hillbillies. From a regal mansion in New York to a swanky estate in Illinois, the following homes allow you to experience the magic of the movies in real life.

Empire, the Emmy-nominated television series and TV Program of the Year winner at the AFI Awards, is a musically driven show about the continuing rise and fall of a hip-hop mogul and his family. Featuring a heavy dose of power struggles and R&B anthems, the show stars Terrence Howard and Taraji P. Henson as the formidable leaders of the Lyon clan, who spend time in a luxe country estate.

Although the show is mostly set in New York City, the Lyons’ homestead is at 45 Lake View Lane in Barrington Hills, Illinois. A fitting home for the fictional family, it provides them with an escape from their lucrative record-label headquarters and makes many appearances throughout the show. In fact, the dramatic first episode of season four takes place almost entirely at the property, with a notable dinner scene showcasing the massive pool and romantically lit garden landscape.

A great room with an imported marble fireplace looks out to the connected limestone veranda occupying the entire back of the home. Ideal for lavish dinner parties, a formal dining room boasts a 26-light chandelier and a custom-built bar with frosted glass that changes colors to provide mood lighting for any occasion.

Providing a grandeur fit for none other than hip-hop royalty, the master suite features a sitting area with a fireplace, walk-in closets, and his-and-her bathrooms connected by a spa-inspired, spacious shower with rain and steam options.

Outside, a half-mile private pathway around the land connects to the lakeside heated swimming pool with arching fountains and LED lights. A variety of gray stonework occupies the outdoor area around the pool, which is befit with a cabana for sunbathers, a fireplace, and plenty of space for alfresco dining or glamorous soirees—so you can party just like the rock stars.

Listed for $350 million, Chartwell is currently the most expensive property on the market in the United States. But fans of The Beverly Hillbillies will recognize it for another reason: the chateau-style abode served as the Clampett family’s home in the 1960s hit television series. The 10.3-acre estate boasts a 25,000-square-foot main residence which was built by architect Sumner Spaulding in 1933. Inspired by 18th-century French neoclassical architecture, the mansion features a wine cellar, salon, ballroom, and period-paneled dining room. Outside, there’s a tennis court, manicured gardens, covered parking for 40 cars, and a 75-foot swimming pool (or, as it was better known to anyone who watched The Beverly Hillbillies, the cement pond).

The opulent homes in the village of Kings Point served as inspiration for F. Scott Fitzgerald’s novel The Great Gatsby—and this one reportedly inspired the set design for the 2013 film. Diehard fans who long to throw legendary parties of their own will want to snap up The Estate at Kings Point, an eight-acre waterfront property about 45 minutes from New York City. Built in 1928, the glitzy, glamorous establishment would have made Jay Gatsby himself proud.

The immaculately manicured grounds showcase century-old trees, sculptured shrubs, and inlaid stone driveways. Fountains and statues (including a full-size replica of Michelangelo’s David) add old-world charm to the eye-popping estate. In the backyard, tennis courts and a stunning swimming pool outfitted with a cabana and swim-up bar are silhouetted by the water. A large dock that can accommodate a 200-foot yacht extends over Long Island Sound.

The estate features 18 bedrooms and 32 bathrooms, which are spread across the original mansion and two smaller mansions that function as guest homes. Bedecked with marble, malachite, lapis lazuli, gold leaf, and agate, the extravagant interiors were designed to wow. The main Estate House—which has six bedrooms, 11 bathrooms, and three half baths—is outfitted with everything from a 10-car garage to a 3,000-bottle wine cellar. Water-like marble inlaid with fish, floor-to-ceiling aquariums, and a sea medallion in the entry foyer create a sea theme, and a formal living room and dining room can effortlessly host a soiree or dinner party. The home is further equipped with a spa, sauna, hair salon, gym, racquetball court, wine vault, and lounge—all perfectly suited for Gatsby-style parties.

The estate was listed for $85 million.