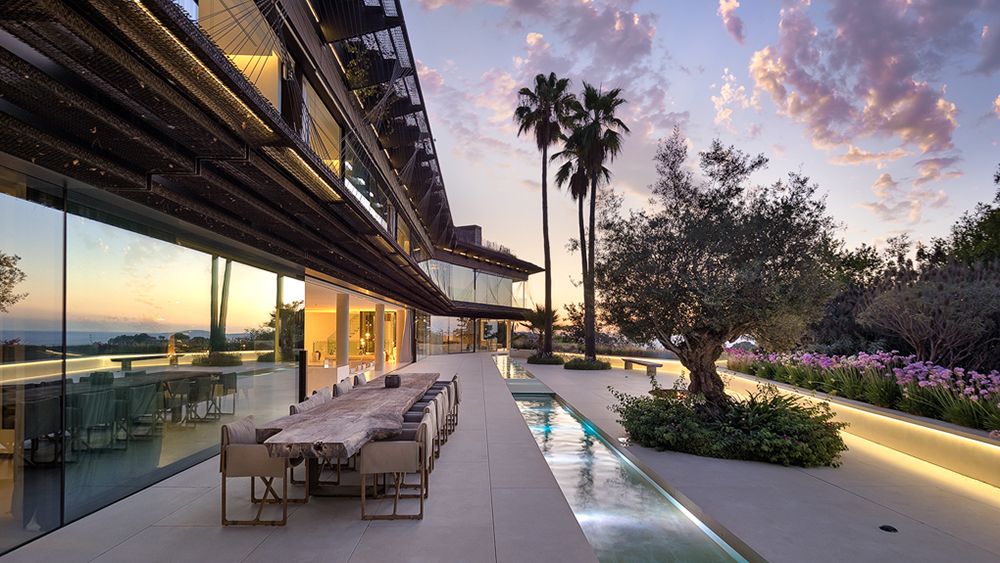 At Villa Solitaire, it’s all about the view. Enjoying a commanding hilltop position in Mallorca’s tony enclave of Son Vida—considered the Beverly Hills of this Spanish island—the spectacular home, which just listed for €65 million (approximately $76 million), boasts views out over the capital city of Palma to the Mediterranean and beyond.

Renowned Italian architect Matteo Thun designed the massive four-story villa back in 2009 (it took another eight years to complete) specifically to make the most of the jaw-dropping panorama. That meant encasing the entire first and second floors in uninterrupted, wall-to-wall glass. At the push of a button, the floor-to-ceiling windows in almost the entire first floor living area disappear into pockets to open up the space to a huge outside dining patio.

“The light within the home is truly spectacular. It changes throughout the day, providing different views of the surroundings, with pastel-colored sunrises and magical sunsets,” listing agent Gabriela Muñoz of brokers Engel & Völkers Son Vida tells Robb Report.

Over to one side of the patio are two of the home’s three pools, both seemingly suspended in air. One is for swimming laps; the other, with its infinity-edge, is simply for soaking and taking in those amazing vistas. The patio is also shaded by a cantilevered roof for which the overhang is suspended by a maze of intricate, tensioned steel cables designed to mimic the look of multiple yacht sails.

The huge main living area is dominated by a very 1960s-style sunken “conversation pit” with enough creamy, square-edged sofas from Italian furniture studio Nilufar to accommodate more than 20 of your best friends. Challenging the outdoor views for attention is the room’s centerpiece glass-tube elevator, which shoots between the home’s four levels, raising and lowering by means of a single chrome hydraulic piston. To watch it in action, from inside or out, is a conversation stopper.

Yet another exceptional feature is the acreage of ivory-white limestone that covers a staggering 25,500 square feet of interior space and over 4,000 square feet of exterior pool and patio. The limestone was sourced exclusively from the Antequera quarries near Malaga on Spain’s mainland.

In addition to that sprawling living room, the first floor features formal and informal dining rooms, a main eat-in kitchen, a tucked-away satellite kitchen for catering staff, a bar and a wine cellar.

Ride the glass elevator up to the second floor and you’ll find seven bedrooms, each with their own bathroom and balcony looking out a Palma and the Med through those twisted steel cables. The huge master suite has its king-size bed positioned right in front of the floor-to-ceiling glass and features a levitating shade so that anyone luxuriating in the tub doesn’t miss out on the views.

Down at the basement level, there’s an expansive wellness area with a gym, sauna, Turkish bath, massage room and even a Zen garden for meditation. The subterranean space also offers parking for up to six vehicles on elegant wooden floors—an area that can be transformed into a sexy nightclub, complete with state-of-the-art sound and a video projection wall. Talking of videos, up on the home’s vast, grassy roof deck you’ll find a large screen for al fresco movie watching.

According to Engel & Völkers’ Muñoz, what goes a long way in justifying Villa Solitaire’s lofty asking price—which currently makes it the priciest home in the whole of Spain—is its location in Son Villa, Mallorca’s most exclusive and oldest residential area. In addition to its 450 lavish hillside homes, the area features three world-class golf courses, as well as a couple of five-star hotels, like the famous Castillo Hotel.

“Villa Solitaire is, without doubt, the most impressive property for sale on Mallorca right now, and is located in one of the very best locations in the Son Vida Hills,” notes Muñoz. “Within minutes, you have access to all the world-class shopping, Michelin-star restaurants, galleries and superyacht marinas that Palma has to offer.”