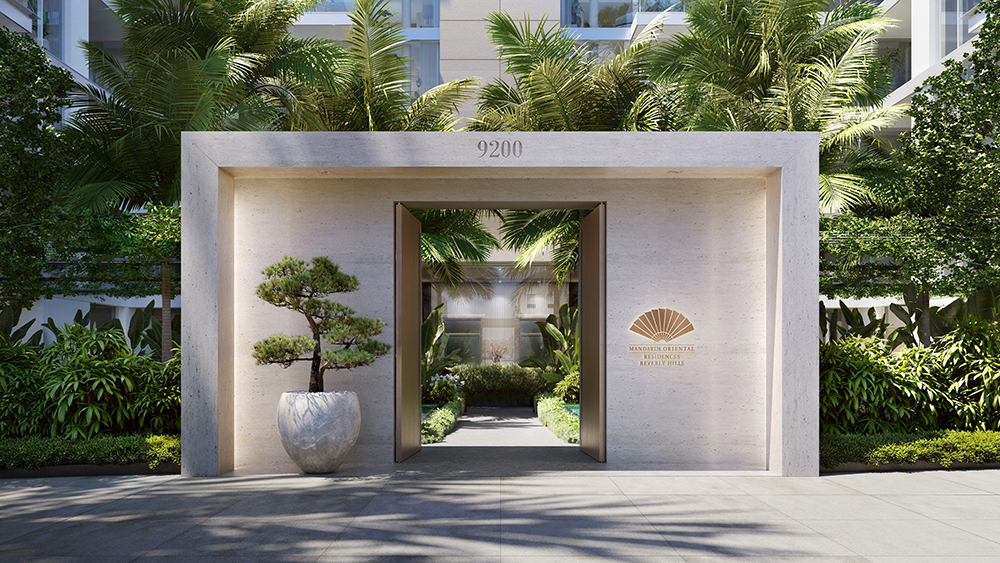 The hotel branded-residences craze, which has by now taken over parts of New York and Florida, is making its way to Los Angeles. On the heels of the success of Pendry West Hollywood—which is run by Montage Hotels & Resorts—Mandarin Oriental is debuting its own set of homes. It’s a first for the brand, and represents its only standalone set of residences in the US.

So while this is a Mandarin Oriental development by name, there’s no actual hotel to be found. In place of that experience, the developer, SHVO, is bringing a slew of amenities to the table to keep the all-important branding alive. Daniel Boulud is coming on board, in a first for the West Coast; the Michelin-star chef will operate a rooftop and ground floor restaurant, as well as oversee room service offerings.

The lobby  Photo: Courtesy of DBOX

Since it’s in Beverly Hills, a place to put your car is important: The residences have a private porte-cochere and offer valet parking to guests. There are library and lounge spaces inside for meetings or dinners, but it’s the building’s rooftop amenities that appear to be the standout. Renderings depict an expansive pool that takes up much of the space, plus a wellness and fitness center.

The kitchen  Photo: Courtesy of DBOX

There are 54 residences altogether up for grabs; 1508 London did the interior design for each one. All of the homes will include outdoor areas, and some will feature an indoor bonsai garden.

The bathroom  Photo: Courtesy of DBOX

For those interested in snagging one of the residences in the new development, prices start at $3.6 million for a 1,200-square-foot apartment. If you’d rather splurge on a penthouse, those go for up to $40 million.

The development will open in mid-2022. If you’d rather opt for a different city, Mandarin Oriental is also opening residences in New York, Honolulu and Boca Raton.

Check out more photos of the Beverly Hills digs below:

One of the rooms with an interior bonsai garden  Photo: Courtesy of DBOX

The rooftop at night  Photo: Courtesy of DBOX