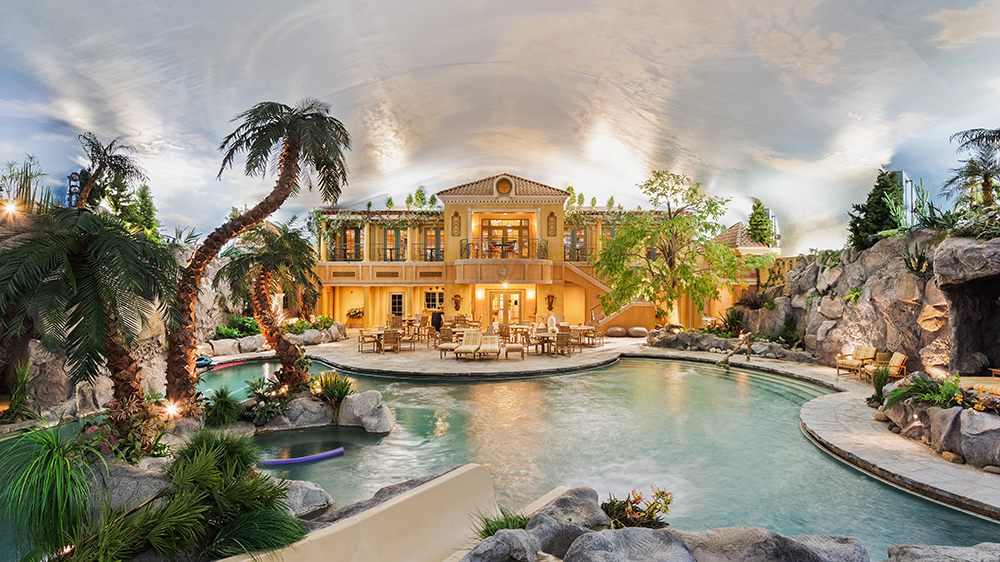 A true “Magic Kingdom” has just landed on the market.

Set in the heart of western Massachusetts, the sprawling estate offers a range of over-the-top amenities to appeal to the well-heeled yet had quite a humble beginning. It was originally equipped with just one small Colonial that late Yankee Candle Co. founder Michael J. Kittredge II bought for $144,000 in 1984. Several years later, the candle king had acquired enough properties nearby to expand the original 1.84-acre lot to a bonkers 100 acres. The founder’s son, Michael “Mick” Kittredge III, is now selling a 60-acre parcel with its own gated manse for $23 million. He tells the Wall Street Journal it is “like having Disneyland in the backyard.”

Located in the rural town of Leverett, the property comprises eight separate structures that collectively provide a whopping 120,000 square feet of living space and 16 bedrooms. Completed in 2010, the 25,000-square-foot main home includes six bedrooms, four dining rooms, a three-story great room and no less than 11 fireplaces. The kitchen is as grand as you’d imagine and sports five islands. There is also a commercial kitchen on the lower level with seven sinks. To top it off, there is a 10-seat home theater and not one but two wine cellars.

Elsewhere on the grounds, you’ll find several guesthouses, two car barns that can hold 80 of your prized rides, a clubhouse, an outdoor pool, and a cabana with a kitchen and bar. Even better, the estate has its own water park that was inspired by the Bellagio in Vegas. Think cloud-painted ceilings, slides, waterfalls and palm trees. The dreamy space is housed in a 55,000-square-foot “spa building” that Kittredge commissioned in the late 1990s.

One of the expansive car barns.  Surrette Media Group

The spa building also includes a two-story arcade, a three-lane bowling alley, a 4,000-square-foot gym, massage rooms and separate indoor basketball/tennis courts. One of the four tennis courts doubles as a concert hall with a 25-foot oak bar, a stone fireplace and a 4,000-square-foot stage. “The dance floor goes out, the tables go down and the lights go up,” Kittredge told the WSJ.

For an additional $4 million, you can tack on a 10-acre parcel with an 8,500-square-foot home and guesthouse. Another lot with an apple orchard is also now available as a separate sale.

“I personally think it would be a great retreat or wellness resort,” listing agent Johnny Hatem Jr. of Douglas Elliman told Robb Report on a phone call. “It could also be the perfect home for someone who wants to collect trophy properties but the possibilities are endless.”