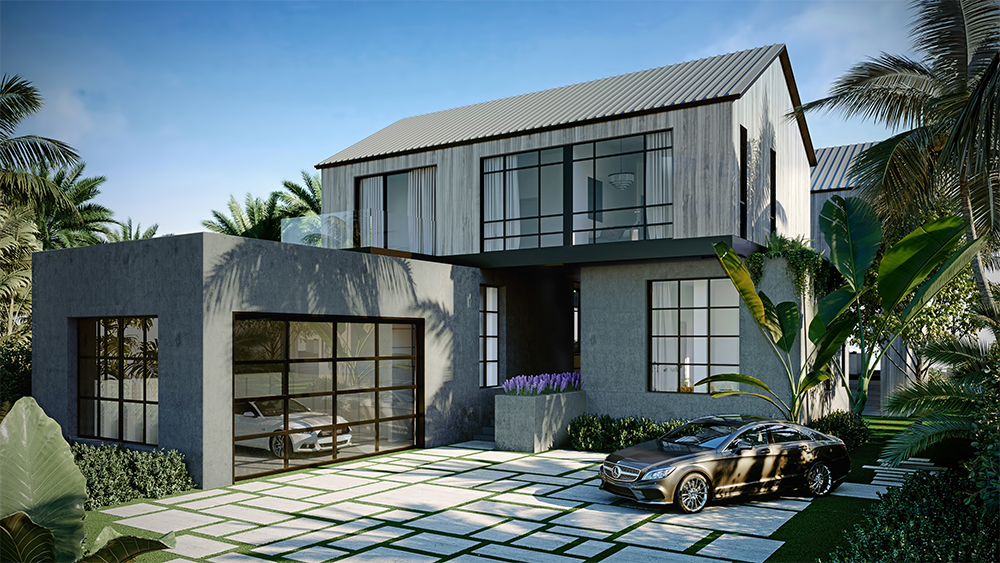 Miami Beach’s reputation as one of the country’s most affluent cities is no mere myth. Here, the country’s wealthiest regularly flock to luxurious vacation homes to take in the sandy beaches. Yet, oddly, homes here often look more or less the same. The sheer redundancy of design—a contemporary style that appears endlessly fascinated with the white box—is nearly impossible to escape. Yet, a few notable alternatives have emerged. Among them is Modern Farmhouse, a new development in the Allison Island area with a pitched roof that resembles a sleek, sophisticated barn. A breath of fresh air for the region, it’s currently on the market for $15.3 million.

The 7,000-square-foot home was developed by James Curnin, the great-grandson of renowned New York City developer Jack Parker. Curnin cut his teeth working with famed architect Paul McClean on a series of homes in Los Angeles before he ended up in Miami, where he enlisted Max Strang to work on Modern Farmhouse. Strang’s firm has become synonymous with sumptuous luxury real estate in Miami, but for this home, Curnin wanted something different.

Outside is a pool and backyard pavilion.  Douglas Elliman

One of the bedrooms.  Douglas Elliman

Instead, Curnin fashioned a family home that takes takes design cues from a farmhouse barn, while still looking decidedly modern. Finishes include white oak flooring downstairs and Salvatori tiling in the bathrooms. Kitchens are kitted out with Boffi cabinetry and custom marble countertops, plus Dornbracht plumbing fixtures. Outside is a covered kitchen, a pool, a two-car garage and a private dock for a boat. In total, the home has five bedrooms and eight baths.

Modern Farmhouse is still in the works but is on track to be completed by October. Curnin will be debuting another finished property just one month later, in November, that he describes as “tropical modern” in style. The architect hopes the home is an architecturally unique piece of real estate both in Miami Beach and among the rest of Curnin’s portfolio. “It brings an elegant, sophisticated twist,” he adds. “I don’t want to be the same, right?”

Oliver Lloyd of Douglas Elliman holds the listing for Modern Farmhouse, which is located at 6431 Allison Road.