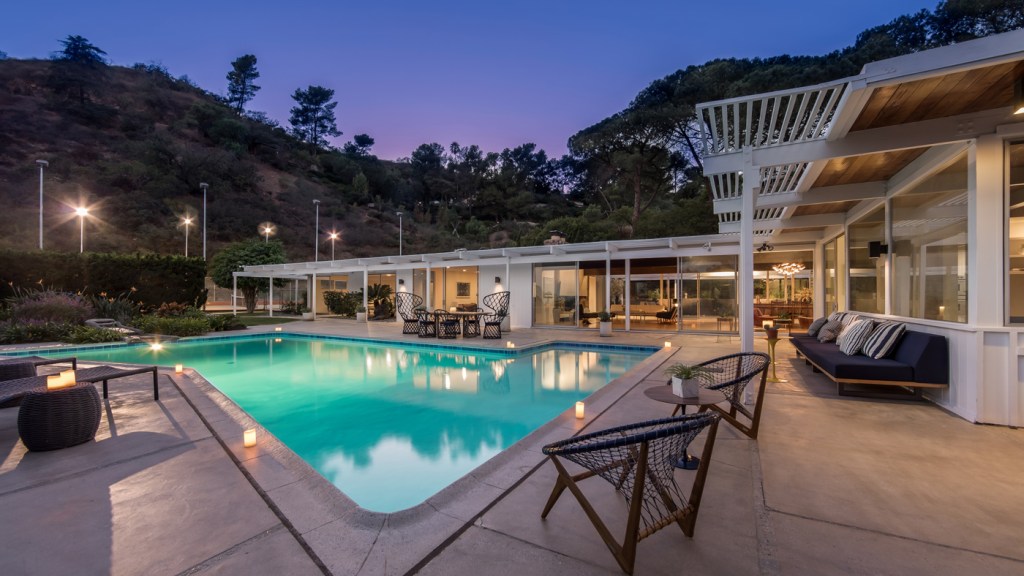 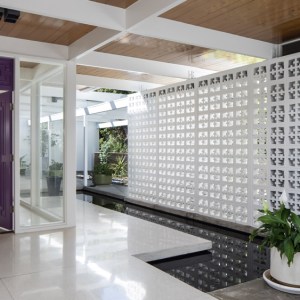 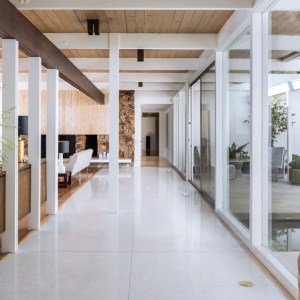 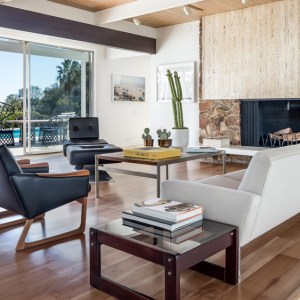 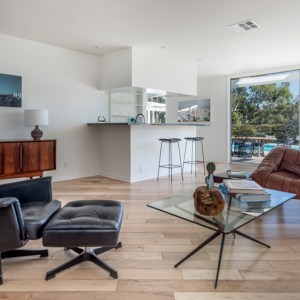 Built in 1959 by architect Eugene Kinn Choy, the Brander House is a striking post-and-beam home located in Hollywood Hills, Calif. Like other Los Angeles homes built in the hills, the approximately 4,500-square-foot abode is surrounded by rolling hills, palm trees, and lush landscaping. Walls of glass provide a seamless transition from indoors to out-of-doors, while interior beams and posts create a unique architectural look that anchors the sophisticated home.

Four bedrooms and four baths make up the mid-century modern home, which was once photographed by esteemed architectural photographer Julius Shulman. Water features, a painted white exterior, and an ultra violet door (reminiscent of the 2018 Pantone Color of the Year) leads into the L-shaped home, where a sandstone and travertine marble fireplace takes up nearly an entire wall in the living room and floor-to-ceiling windows showcase the city beyond. Hardwood floors, vaulted ceilings with exposed beams, and crisp whites are featured prominently throughout the light-drenched, airy home. Original finishes, skylights, and a concrete screen help the home stay true to its roots, while pocket doors lead outside from several of the rooms.

The dining room shows off a floating built-in buffet, and the kitchen displays a large center island, skylights, and wood cabinets. From a living room with a wet bar to a sauna, the elevated home has something for everyone. Sliding glass doors lead to a backyard swimming pool surrounded by areas designed for eating and lounging, where residents can glimpse views of the Los Angeles skyline. Situated on a 1.3-acre lot, the home also comes with a lighted tennis court, a detached studio, a meditation garden, and a four-car garage.

The home was recently introduced to the market for just under $9.3 million. Donovan Healey and Marcie Hartley of Hilton & Hyland/Christie’s International Real Estate hold the listing.