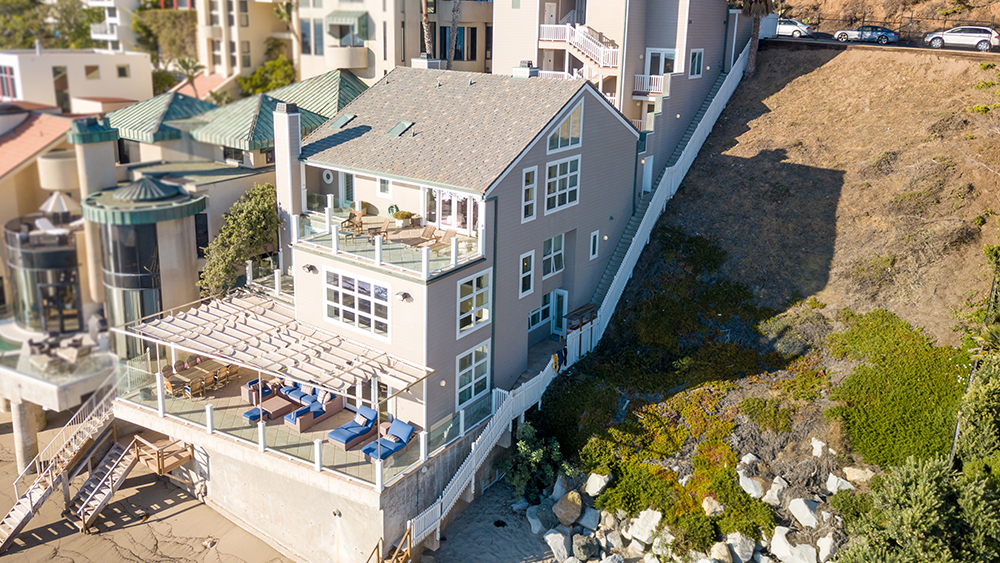 Steve Levitan is best known for producing 250 episodes of the popular television series Modern Family, but his long career in television also includes executive producer and writer credits for shows such as Wings and Frasier. He’s a well-known figure in Malibu, especially on Broad Beach, where the home he raised his own family in is located. He’s just listed the 6,714-square-foot oceanfront mansion for $15.95 million.

The home is just a short stroll down the sand to Pierce Brosnan’s compound, which the actor listed for $100 million in September.

Levitan’s Cape Cod-style place has views of the Pacific from nearly every bedroom and balcony, as well as has plenty of space for both entertaining and a quiet retreat for every member of the household.

From the street, like many houses built into the cliffside enclave, the six-bedroom, seven-bath home looks like an unassuming single-story ranch, with the main entrance sandwiched between three garage bays. But devotees of the area know better: This house descends several levels straight to the sand. You just need to jump in the elevator to make your way down.

The primary bedroom suite includes its own private deck, a fireplace and sitting area, a gym, massive walk-in closets and soaring cathedral ceilings. The other five bedrooms are also all suites, one intended for staff quarters, but new owners can make it their own, of course.

The great room, with its soaring ceiling, opens to the sea on one side and the kitchen and dining areas on the other. Finishes such as crown molding add warmth to the space. There’s also another separate living room, a home office and, for those chilly mornings post surfing, a hot tub.

One of the home’s six bedrooms  Photo: Courtesy of Coldwell Banker Malibu

No pool is on the premises, but that’s not really an issue. If you crave laps, there’s the ocean, of course, but there’s also the neighborhood club’s pool and friendly clubhouse down the road. At just under $16 million, this home is something of a bargain in tony Malibu, as Coldwell Banker listing agents Kimberley Pfeiffer and Don Richstone know.

The sitting room inside the primary suite  Photo: Courtesy of Coldwell Banker Malibu

One of two walk-in closets in the master  Photo: Courtesy of Coldwell Banker Malibu

The living room leads out to the sand  Photo: Courtesy of Coldwell Banker Malibu

Another of the home’s bedrooms  Photo: Courtesy of Coldwell Banker Malibu