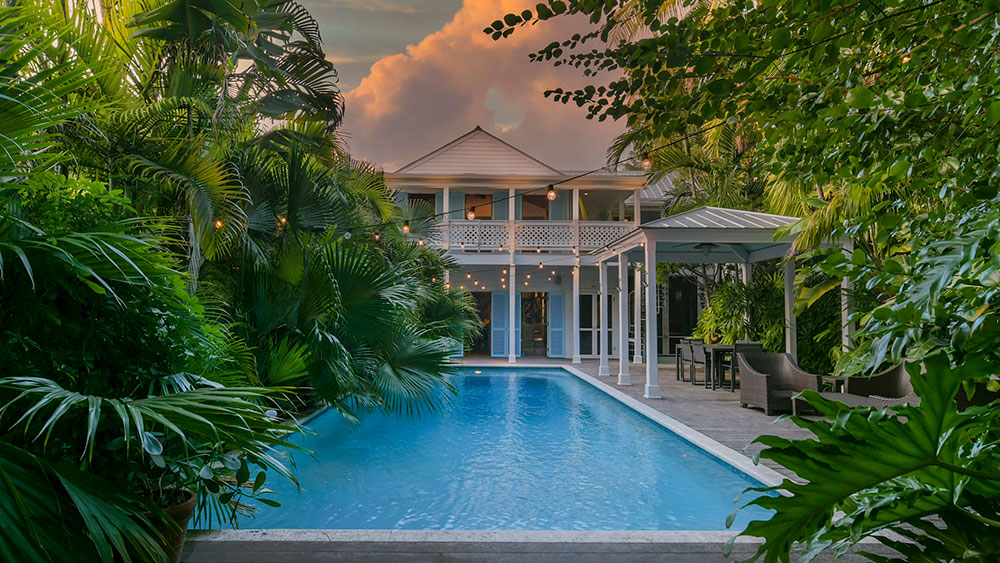 Avast me hearties, NASCAR Hall of Famer Dale Earnhardt Jr. is looking to sell his pirate ship-inspired home in the heart of ye olde Key West, Fla. for a big bag of gold doubloons, or $3.7 million in today’s currency.

Built in 1863 during the Civil War era, the two-story house celebrates Key West’s swashbuckling pirate past with a custom kitchen—sorry, galley—designed by Earnhardt Jr. himself, which could have come straight out of Jack Sparrow’s Black Pearl.

The wood-beamed room comes with piratical features like the menacing skull and crossbones mural, a huge ship’s wheel at the end of the varnished-wood counter, rope-wrapped pillars, sea-chest-like kitchen cabinets and parrots. Lots of parrots.

The staircase leading up to the second floor features nautical hemp-rope netting, more rope-wrapped pillars and a giant mural depicting a Pirates of the Caribbean-style island at sunset with swaying palm trees and towering peaks.

One fascinating, and original, feature of the home is the secret hatch on the second floor, designed to let the owner spy on blackbeards in the parlor below.

The home also has one of the largest and deepest swimming pools in Key West—it’s more than 14 feet deep, roughly two fathoms—and includes a gate on the second-floor wrap-around balcony so guests can be made to walk the plank into the water below.

“This truly is a unique property steeped in rich and mysterious history,” says Bob Cardenas, of Ocean Sotheby’s International Realty who holds this unusual listing.

“It really captures the spirit of Key West and, of course, anyone who dreams of being a modern-day pirate is going to love this place,” he adds.

Cardenas sold the home on Key West’s Eaton Street, a short stroll to the town’s landmark Mallory Square and Sloppy Joe’s bar, to Earnhardt Jr. and his wife Amy back in 2009, for a reported $2.4 million.

The couple proceeded to restore and renovate the historic property, giving it a fun, beachy, nautical vibe.

It likely provided the inspiration for the Earnhardts to take their love of property makeovers to the small screen. In 2018 they starred in a four-part reality TV series for the DIY Network called “Renovation Realities: Dale Jr. & Amy” where they restored another Key West fixer-upper.

When they finished the DIY renovation, they listed the home for $2.6 million and sold it within days.

As for the Eaton Street property, the quirky 3,300-square-foot house comes with five spacious bedrooms, 3.5 baths, nautical-inspired family rooms with a flotilla of wall-mounted model ships and a large, covered deck and gazebo next to the pool.

In the lush, tree-shrouded grounds there’s also a wooden clapboard, one-room guest house. According to Bob Cardenas, the Earnhardts drew up plans to turn it into a two-bedroom, one-bath suite, but never got around to completing the makeover.

Before retiring from full-time racing at the end of 2017, Earnhardt Jr. had amassed 26 career victories, including wins at the 2004 and 2014 Daytona 500s. These days he runs his own race team—JR Motorsports— and is an author, fundraiser for his Dale Jr. Foundation and a NASCAR race analyst for NBC.

His eccentricity when it comes to property is also seen in his sprawling 300-acre estate in Mooresville, NC, which he affectionately calls “Dirty Mo Acres.” It includes a vintage Wild West-style town, a treehouse, paintball course and five miles of ATV trails.

As someone used to spending his life lapping the racetrack at 200 mph, Earnhardt is no doubt looking for a speedy sale to an equally quirky homeowner for this Key West home.

The pillar is wrapped in a ship’s rope.  Courtesy Andre van Rensburg

Walk the plank from this veranda.  Courtesy Andre van Rensburg