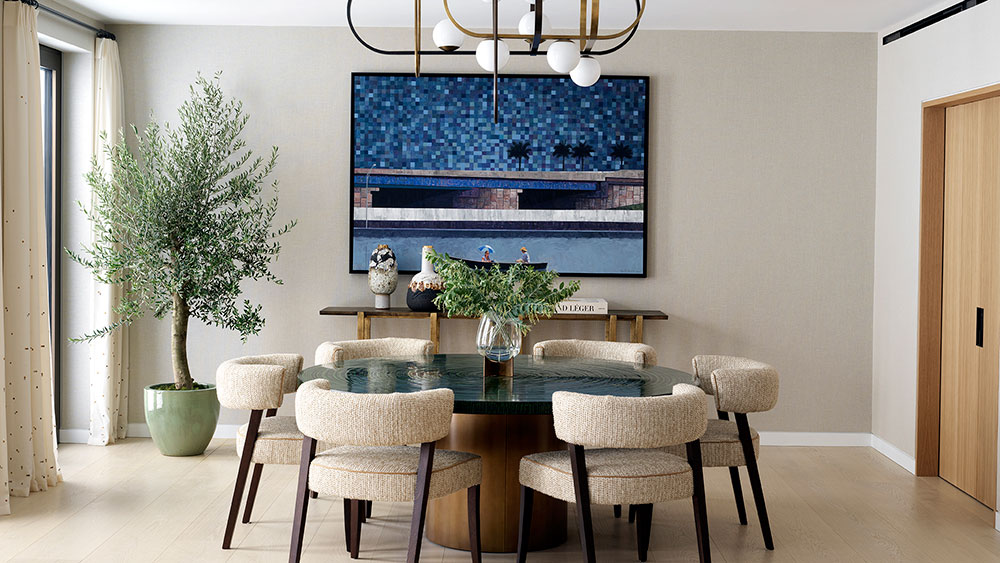 The dining room. The table is from Matthew Bray and Matthew Collins, and the painting is by Gustavo Acosta.

Move to Beverly Hills and you’ll have celebrities aplenty as neighbors. Move to No. 1 Palace Street in London, though, and you’ll be just down the road from the royal family’s digs. The nearby address is a historic building in its own right, too, dating back to 1860, when it was a luxury hotel favored by visiting dignitaries. Developed by Northacre, it includes 72 luxe residences, starting at about $3.2 million at current exchange. One of these units has been recently decked out by designer Natalia Miyar.

Miyar, whose practice is based out of London, drew inspiration from the city when putting together the home’s interior. “Even though it’s steeped in history and a love of heritage and tradition, London also feels very fresh and has such an international group of cosmopolitan people living there,” she says. “The brief was really to marry these two components.”

It was important, then, that she worked with local craftsmen who she knew and trusted to create bespoke pieces for the home. The green dining table, for example, was custom-made by London-based duo Matthew Bray and Matthew Collins. Miyar gave them a malachite stone as inspiration for the color—the result is a piece of furniture that resembles a rippling pool.

The living room. The blue couch is from Tyson London, the oak-and-leather chair is vintage, and the swivel chair is from Miyar’s atelier. The artwork is Saigon by Thomas Vu.  Photo: Simon Brown

Another collaborator was Tyson Bennison of Tyson London, who designed the two-tiered table in the entryway and the slate blue sofa in the living room. For the latter, Miyar and chose a velvet called “Vienna,” named for its resemblance to the thick, beautiful curtains that you’d find in an opera house.

While the fully kitted-out apartment is beautiful, sadly, it’s not available turnkey. Miyar’s concept is meant to give an idea of what life might be like for the future resident of this two-bed at No. 1 Palace Street. In addition to a stylish residence, buyers will also have access to the building’s amenity suite, which includes a 6,000-square-foot courtyard garden as well as a private gym, swimming pool and sauna.

Want to take a closer look at the carefully considered design? Check out more photos below:

The entryway. The layered table is from Tyson London. In the office behind, the table is by Miyar’s atelier, and the chair is from Vidal & Company.  Simon Brown

One of the bedrooms.  Simon Brown

One of the bathrooms.  Photo: Simon Brown