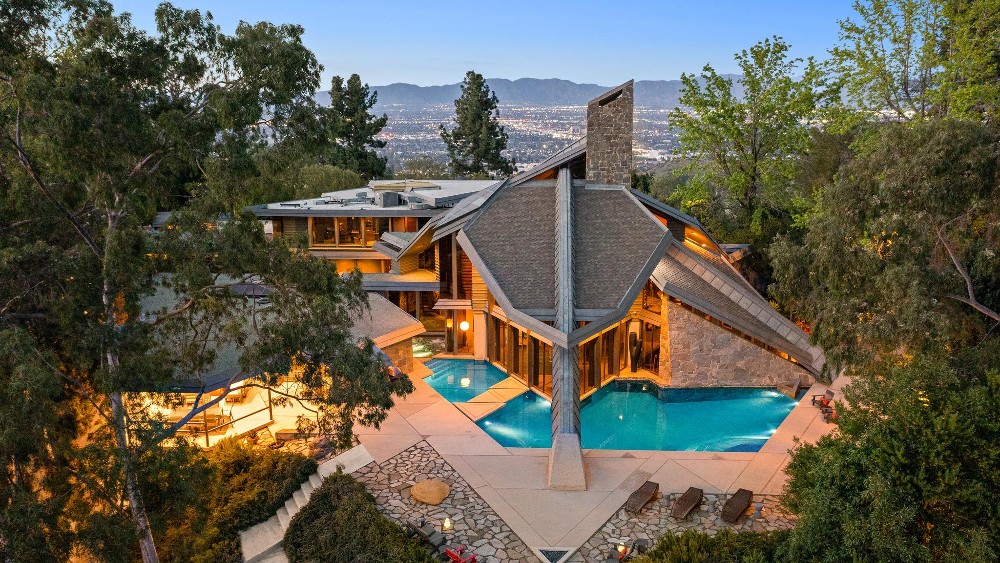 The late, great basketball legend Wilt Chamberlain may have built this home in 1971, but more than five decades later, the spirit of the athlete feels intact within its redwood-clad walls. Chamberlain was a four-time MVP best known for his many seasons spent playing for the Los Angeles Lakers, and is regarded as one of the greatest basketball players of all time. At the height of his career, he purchased this 2.5-acre piece of land, a former anti-aircraft missile site during the Cold War, and enlisted architect David Rich to build him a custom LA bachelor pad. Built with a mix of redwood, glass and natural stone from neighboring Bouquet Canyon, the resulting home is an architectural gem.

Just listed for $14.9 million, the house, located at 15216 Antelo Place, was originally named Ursa Major—a nod to Chamberlain’s “The Big Dipper” nickname, which came from the 7-foot-1 player having to dip his head when he walked through doorways. His height played into Rich’s creation, which is a Frank Lloyd Wright-inspired triangular home.

“David Rich drew a circle, a rectangle and a triangle on the 2.5 acre lot and asked Wilt which one of the shapes felt comfortable to him,” co-listing agent Zac Mostame with the Agency tells Robb Report. “Wilt instantly felt comfortable as he stepped into the triangle, and that’s how the design of the home came about.”

The home is located on a hilltop in a private cul-de-sac and ensconced by towering trees on all sides. You enter the place through a weaving stone pathway flanked by small, dimly lit ponds and water features, and are greeted by a 2,000-pound front door. Once inside, you’ll find what’s arguably the most striking aspect of the home: the five-story, 40-foot ceilings.

“Being a man of more than seven feet, it was hard to go into most houses without having to duck his head,” Mostame says. “He wanted his friends and himself to feel comfortable when they walked into his home, hence the very high ceilings throughout the house.”

The wraparound pool gives the impression that the home is floating on water.  Ryan Lahiff

The interiors feature Brutalist-inspired architecture and design, sharp touches that are juxtaposed well with the surrounding nature and natural materials like redwood and stone. The living space features a sunken lounge area with a fire pit and is encircled by walls of windows so you always get a peek at the outdoors. There’s also a wraparound pool—which cannot be replicated today due to building codes—that gives the impression the home is floating on water.

The 9,400-square-foot residence has six bedrooms and eight bathrooms. The home has been extensively renovated to include modern technology and more amenities. After purchasing it in 2009 for $6.5 million, a previous owner decided to remove some of Chamberlain’s more curious features like a wall-to-wall waterbed-lined “playroom” and a mirrored, retractable ceiling in the primary bedroom. (Chamberlain, known as something of a playboy, also had a sunken bathtub at the foot of his bed.) Newer rooms and features include a media and billiards room, gym, redwood sauna and an outdoor kitchen. There is also an updated gourmet kitchen with state-of-the-art appliances.

The stone walkway leading to the front door.  Ryan Lahiff

The primary suite and bathroom span the entire second floor, accessed via a unique floating staircase, and come with even better views of the mountains, ocean and reservoir. And while there have been several updates throughout the last 50-plus years, Chamberlain’s vision remains.

“The design throughout the house represents so many aspects of Wilt’s life,” Mostame says. “The eagle sculpture attached to his fireplace in the living area was made from an old car and represents freedom.”

Views of the reservoir from the property.  Ryan Lahiff