By Mark David for Dirt 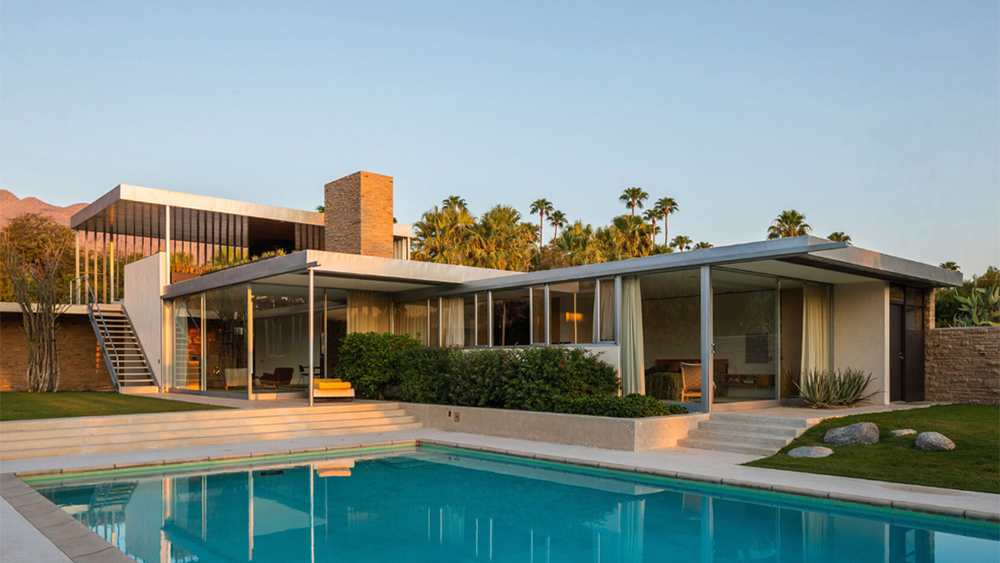 Buckle up your safety belts mid-century modern architecture enthusiasts, because one of America’s great residential treasures, the Kaufmann Desert House in Palm Springs, Calif., has come available, as first reported in The Wall Street Journal, with a sky-high price of $25 million.

One of the last domestic commissions by internationally vaunted Vienna-born architect Richard Neutra, and considered one of the finest examples of the International style of architecture in the United States, the sprawling, multi-winged home was designed and built in the mid-1940s as a winter retreat for Pittsburgh department store tycoon Edgar J. Kaufmann, the same deep-pocketed philanthropist and architecture patron who in the 1930s commissioned Frank Lloyd Wright to design and build the arguably even more famous Fallingwater residence in southwestern Pennsylvania.

After Kaufmann died in 1955, his dazzling desert retreat, originally designed to be occupied just two months per year, stood vacant for a number of years. It was later owned by late businessman Gene Klein and, in the 1980s, by Barry Manilow. Having deteriorated due to neglect and bastardized with clunky renovations, the house came for sale in the late 1980s as a major fixer-upper but did not sell until 1993 when it was acquired for about $1.5 million by financial executive Brent Harris and his now ex-wife, architectural historian and preservationist Beth Harris. 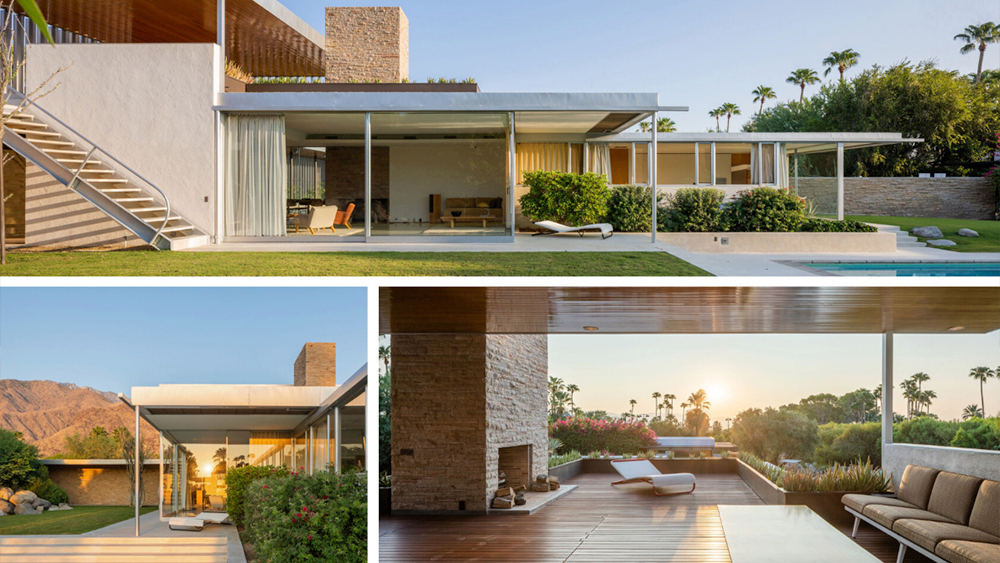 The Harrises were not, according to one of the many articles published about their award-winning restoration, looking for a desert retreat when they bought the property. They saw, instead, a rare opportunity to save an extraordinary residence designed by one of the most innovative architects of his day. And that is exactly what they did, hiring esteemed Santa Monica architecture firm Marmol Radziner & Associates to bring the house back to its pristine original glory. In addition to removing all the tacky additions, they identified original materials and finishes, tracked down some of the original manufacturers and craftsman and sourced new entities to restore and/or re-create every element of the house down do its door handles and lustrous birch-veneered plywood. The results are undeniably spectacular.

Neutra designed the roughly 3,200-square-foot vacation house to both facilitate privacy and promote a relaxed indoor-outdoor lifestyle, while at the same time offering respite and shelter from the blazing heat and sun. The central section of the glass-walled abode holds the living and dining rooms, while other areas pinwheel off the center of the house, with each wing dedicated to a specific function. Marketing materials prepared by listing agent Gerard Bisignano at Vista Sotheby’s International Realty show the separate north wing holds a pair of guest suites with outside entrances, while the southern extension accommodates the garage. The west wing contains a couple of additional guest or family bedrooms, plus the service areas, which include the kitchen, and the most private east wing houses the main bedroom that overlooks the swimming pool. Zoning restrictions did not allow for a second floor so Neutra’s clever solution to take advantage of views and breezes is what he called the “gloriette,” an outdoor room atop the house’s central section. With operable vertical aluminum louvers that modulate light and air, the partly covered space includes built-in seating, a massive stone fireplace and knock-your-bathing-suit-off views of Mount San Jacinto. 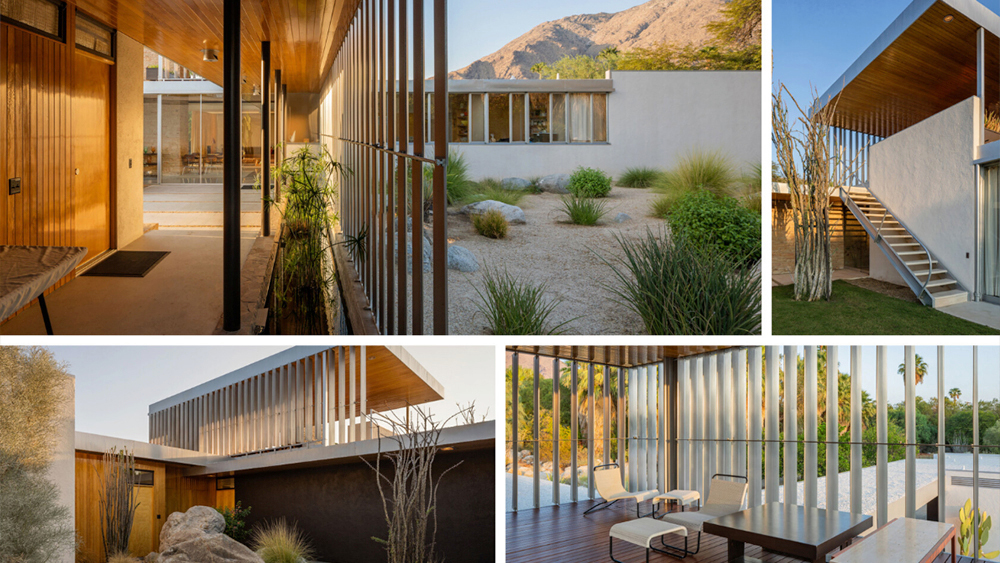 Immortalized in photographs by Julius Shulman in 1947, and then again in 1970 by high-society photographer Slim Aarons, the swimming pool remains the visual and psychic soul of the lushly planted 2.5-acre estate. The Harrises, who divorced some time ago—the house is now owned solely by Mr. Harris, added a poolside pavilion that incorporates an entertainment lounge with state-of-the-art sound and media equipment, plus a small gym with steam shower. Beyond the pool pavilion hides a tennis court surrounded by serene gardens.

This is not the first time the Kaufmann Desert House has up for sale since its rehabilitation and restoration. In 2008 it was made it available during Christie’s Postwar and Contemporary Art auction with an estimated sale price of $15-$25 million. So the scuttlebutt goes, an unknown winning bidder entered into an agreement to buy the house for $15 million, plus $4 million in commission fees. Alas, the deal soon fell apart. The house was then unsuccessfully set out for sale at $12.975 million, but even that deep discount failed to attract a buyer. 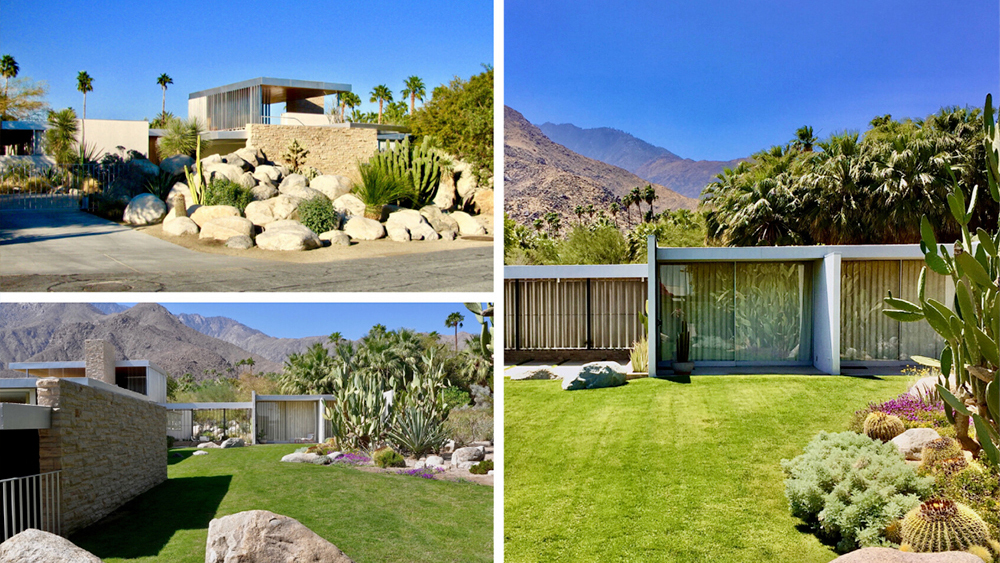 That was, indeed, a long time ago. Since then the interest in and demand for architecturally significant trophy homes has only grown for those in a financial position to buy, restore and maintain these delicate, high-maintenance hot house flowers. Though fewer than ten single-family homes in Palm Springs have sold for more than $5 million over the last five years, and no previous sale in the hot-as-Hades desert city even comes close to the by-any-standard mountainous $25 million price tag of the Kaufmann House, Palm Springs is famous for its scads of beautifully preserved midcentury masterpieces. So, sky-high price be damned, there’s bound to be keen interest in such an extraordinary offering.

Other Palm Springs architectural tours-de-force that sold for previously unimaginable prices include the spaceship-inspired Elrod House, which cleaves to a rocky precipice above the south end of town, and that iconoclast fashion designer Jeremy Scott, creative director at Moschino, scooped up in 2016 for $7.7 million. Later that same year, billionaire investor Ron Burkle, who also bought Frank Lloyd Wright’s Ennis House in LA last year for $19 million, dropped $13 million for a spectacularly wacky, and also Lautner-designed flying torus-shaped mansion built for Bob and Dolores Hope. Just a fraction of the pie-in-the-sky original price of $50 million, the sale price of the Hope house was then and still is the highest price ever paid for a single-family home in Palm Springs. It’s quite possible Kaufmann Desert House will blow that record out of the desert sands. However, it’s highly unlikely the sale will best the Coachella Valley’s top price of $42.9 million that property collecting billionaire Larry Ellison paid in 2011 for the 240-acre Porcupine Creek estate in Rancho Mirage, which he now plans to convert to an elite private resort. 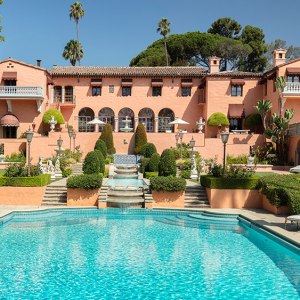 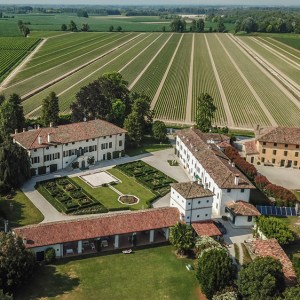 A Sprawling Prosecco Vineyard and Villa in Italy Just Hit the Market for $13.6 Million 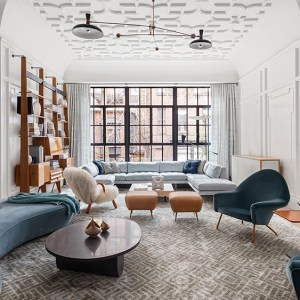 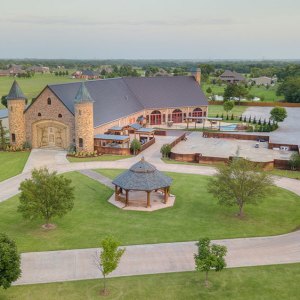 California Read the Room: 10 Homes With Magnificent Libraries for Hitting the Books During Quarantine