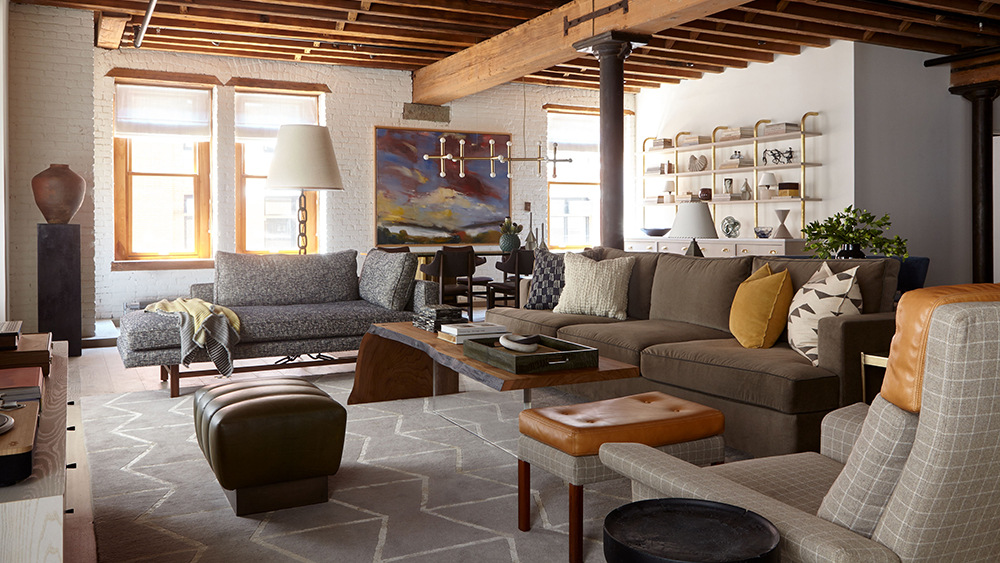 It often takes living in a new home or condo for a bit to work out all the pros and cons of the pre-existing interior design. That’s what happened between a young couple and their loft at 155 Franklin: After a year there, they decided it was time for some renovations. They tasked Dumais Interior Design with reworking the 2,400-square-foot unit and making it feel more fresh. Now, they’ve listed the place for $7.2 million, so all of those updates could soon be yours.

The home is a true loft with an open floor plan, and it’s situated in Tribeca overlooking Leonard Street. The building itself dates back to 1882 and was originally a warehouse. Nowadays it’s better known as a favorite hideaway for celebrities: Taylor Swift owns multiple units here (she bought one from Lord of the Rings director Peter Jackson) and Orlando Bloom flipped a condo in the building a few years back.

The dining room area, which features a chandelier from Remains Lighting  Joshua McHugh

Since the for-sale residence has such a large open space, one of the biggest challenges was sectioning it off into different “rooms.” Interior designer Kevin Dumais and his team brought in furniture and decor that was a mix of custom pieces and vintage finds. Since it’s in a historic building, they worked with some of the pre-existing elements rather than against them. “The exposed ceiling, the exposed beams, the columns and all that stuff hadn’t been touched or renovated over,” Dumais tells Robb Report. “So it was exciting, it felt like a true loft.”

The kitchen was one of the biggest updates. Dumais says the original was “difficult to maneuver,” so the team reworked the layout in order to make cooking and entertaining easier. The counters are Calacatta marble, the cabinets are all custom and feature walnut interiors and the appliances include a Subzero refrigerator, a Miele dishwasher, Viking range and a Wolf oven. Storage was another priority. Dumais added a walk-in pantry to the space as well as a double-sided bar that divides the room and functions as a hallway closet on one side and a wine fridge on the other.

There are three bedrooms and two bathrooms altogether, but the primary suite is opposite from the other two, so it feels suitably private. It includes a walk-in closet from California Closets as well as a bathroom with more Calacatta marble, a double vanity from Restoration Hardware and dual rain shower heads.

Interested in snapping up this unique listing? Kirsten Jordan and Victoria Adamo of Douglas Elliman hold the exclusive listing. Check out more photos below:

Another view of the living room  Joshua McHugh

One of the bathrooms  Joshua McHugh