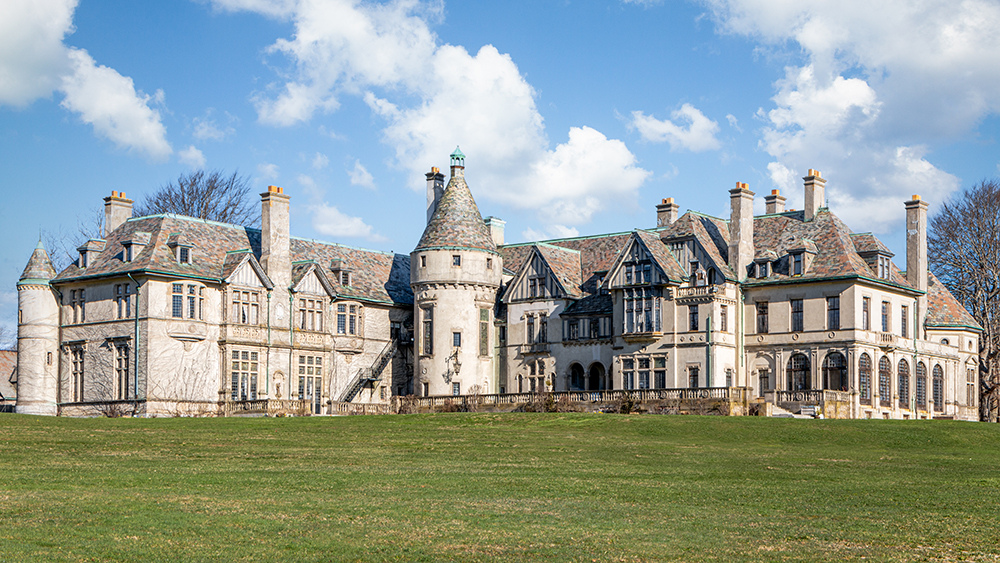 Don’t worry, the ghostly spirits are said to be friendly. Though the door handles that rattle and turn by themselves and the male voice that asks “Hello, is that you?” might send shivers down your spine.

Back in 2011, the Syfy Network’s Ghost Hunters team spent the night inside the Seaview Terrace mansion, the former Newport, Rhode Island, home of whiskey baron Edson Bradley. During the filming, the fearless Hunters recorded muffled voices, footsteps and clunks on floors above, and felt dramatic temperature changes in the “creepy” third-floor tower.

But in the eleven years since, perhaps the spirits have decamped elsewhere. “I’m sorry to say that my visits to the house have been entirely ghost-free. Though I must admit that I’ve not been there at night,” Lea Savas, listing broker with Edge Realty RI, tells Robb Report.

The historic home has rooms that were imported from French chateaux.  Photo: George Gray for Edge Realty RI

Even without that supernatural component, Seaview Terrace has quite the backstory. Spread out over a staggering 43,770-square feet, this historic Elizabethan-Revival mansion is the fifth largest of Newport’s famed, Gilded Age “summer cottages” that include Cornelius Vanderbilt II’s conspicuous-consumption pile, the Breakers.

The home sits on eight hilltop acres just off Ruggles Avenue and runs alongside Newport’s famed Cliff Walk. For beach lovers, it’s a short stroll to Sheep Point Cove and the crashing Atlantic. Inside, Seaview boasts 29 bedrooms, 18 bathrooms, 10 fireplaces and a Great Room worthy of an English castle.

One of the original fireplaces  Photo: George Gray for Edge Realty RI

Back then, Edson Bradley Jr. was president of Kentucky whiskey distiller W.A. Gaines & Company, with exclusive rights to the “Old Crow” whiskey label. Under him, the company became the largest producer of sour mash whiskey in the world.

In 1907, Bradley purchased a mansion on Washington DC’s Dupont Circle and filled it with complete rooms from French chateaux that he had shipped to DC intact. But tiring of Washington society life, Bradley and his wife decided to move to fast-emerging Newport. In 1922, they bought the so-called Kernochan residence, a brick and half-timbered English manor house-style mansion, and commissioned leading New York architect Howard Greenley to do a complete makeover.

That redesign included disassembling most of the DuPont Circle mansion brick by brick, including all those imported rooms, and trucking it all to Newport to incorporate it into the Kernochan home. The move, which took two years, was the subject of an episode of Ripley’s Believe it or Not.

After falling into disrepair, the estate was “rescued” by entrepreneur and mansion preservationist Martin Carey, who, in 1974, paid $270,000 for the spread. He promptly leased it to Salve Regina University, which used it until 2009. Since then it has largely stood empty.

Today, the three-story mansion features a first floor kept largely intact from the Edson Bradley days. Still preserved is the massive great room with its Whispering Gallery modeled after the one at St. Paul’s Cathedral in London. It also has an early Renaissance stained-glass window, entitled “The Flagellation”, that was created in 1547 for Italy’s Duomo di Milan cathedral.

But according to Savas, while the first floor is still “magnificent”, the second and third floors still are stripped-out and basic from their years of being used as school dorms and accommodation for visiting America’s Cup sailing teams.

“If definitely needs some loving restoration. In terms of moving-in now and using the entire property as a home, probably not. But once restored, once returned to its former glory, it will be like nothing else in Newport. This is truly a once-in-a-lifetime opportunity, a true piece of history,” she adds.

Check out more images of the historic mansion below: