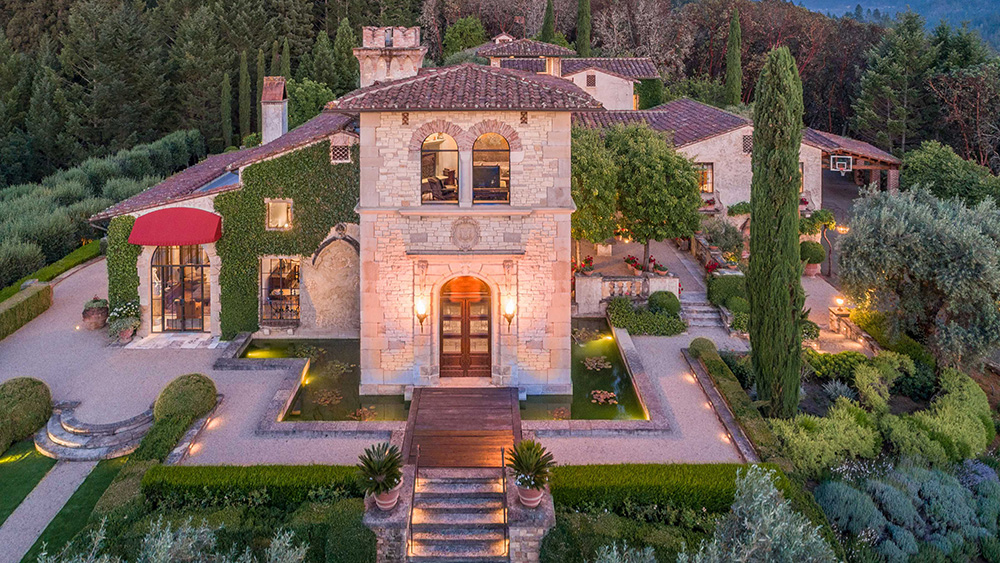 Football legend Joe Montana is hoping to score a touchdown on the sale of his spectacular Tuscan-style villa, set in 500 acres of California’s Napa Valley wine country. His asking price: $28.9 million.

The Hall of Fame quarterback, who led the San Francisco 49ers to four Super Bowl victories in the 1980s, previously listed Villa Montana back in 2009 for an ambitious $49 million—a nod to his much-loved team.

After punting and dropping the price to $35 million in 2012, Montana and wife Jennifer took the estate off the market after their four children reportedly begged them to keep it for a few more years.

With the kids—now aged 27 to 33—kicking off their own careers, and the Montanas now relocated to San Francisco where Joe is running his venture-capital firm, their equestrian-focused estate is back on the market, with a 40 percent price shave compared to 10 years ago.

What does $28.9 million buy? A lot. The estate features a stunning 9,700-square-foot, three-bedroom Italian-inspired villa, a separate guesthouse/artist studio, a caretakers’ cottage, plus  a sprawling equestrian center.

Oh, and did we mention the wine cellar that can hold 3,500 bottles, and a cellar that holds the bottles of olive oil created from the roughly 30-to-60 gallons produced annually by the estate’s olive trees?

According to listing agent Avram Goldman of Compass, the Montanas were inspired to build the villa by their travels throughout Italy and France.

After buying the 500-acre property a 15-minute drive from the quaint Napa Valley town of Calistoga, they spent five years designing and building the main villa, completing the exhaustive project in 2003.

During that time, they scoured Europe for antiques, snapping-up Italian marble flooring, sinks, fireplaces, 16th-century iron gates, a 17th-century church altar surround and even a Parisian marble bathtub that needed a crane to install in the main house.

The result is nothing short of perfection. “They wanted the house to have the authentic feel of an Italian villa,” says Goldman. It looks like they took a home from Italy, picked it up with a big helicopter and set it down here.”

To enter the villa, you first cross a bridge over a moat. Then, climb a staircase up one of the two Tuscan-style turreted towers to take in stunning, 360-degree views of the Napa countryside, and the 4,300-feet-high Mount St. Helena in the distance.

One of the main focuses of the home is on outdoor living. So in addition to a large swimming pool, basketball/tennis court, bocce-ball terrace and skeet shooting range, there’s an elaborate outdoor kitchen that features a Tuscan grill and professional-grade pizza oven.

If you’re into water sports, the 500 acres includes two streams for canoeing, plus a large pond for swimming or fishing.

The Montanas’ love of horse riding prompted the couple to develop the estate’s professional equestrian center with its riding arena, stables for 30 horses and extensive riding trails throughout the property.

One of the living areas.  Courtesy Paul Rollins/Compass

If riding is your true passion, the Montanas will happily sell you their adjoining 87-acre ranch, with its 11-stall breezeway barn, covered arena and ranch office, listed separately with Compass for $3.1 million.