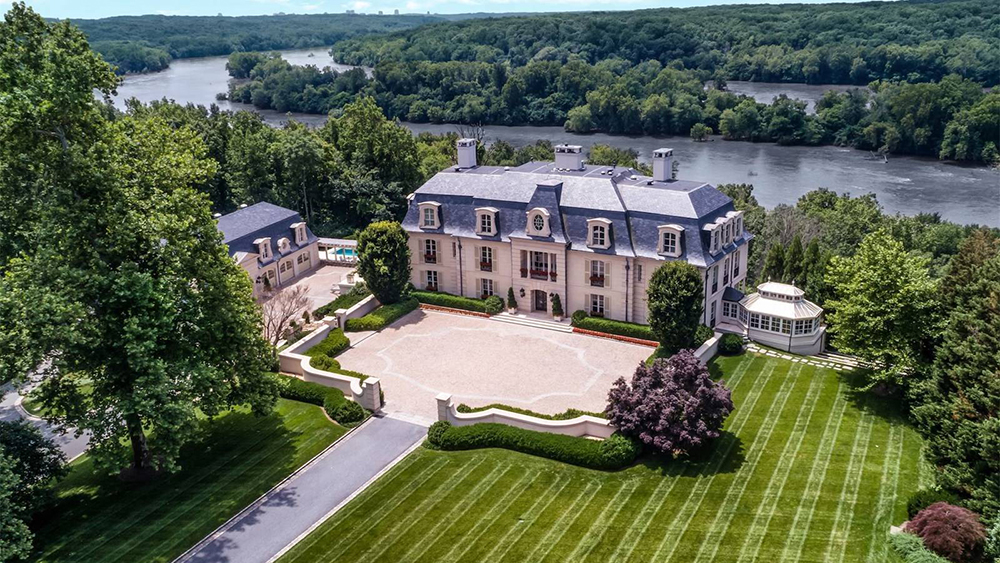 With the ink on the final payment check likely still wet, now might be a perfect time to throw-in an offer on Snyder’s 30,000-square-foot mansion on the banks of the Potomac River. Listed back in October for $49 million, he’s still looking for a buyer.

Even billionaires, it seems, need to worry about cash-flow.

Considered to be one of the most spectacular – and certainly one of the priciest – properties in the metro D.C. area, River House, as it’s known, sprawls over 15 wooded acres alongside the Potomac.

Snyder and his wife Tanya – she’s the Lady S – bought the property in 2000 from the estate of Jordan’s late King Hussein and wife Queen Noor. According to the Wall Street Journal, the Snyders paid $8.64 million for the existing house and land, but quickly acquired six adjacent plots to expand the compound to around 15.2 acres.

While the Husseins’ home was plenty lavish, the Snyders decided a major makeover was in order. They signed-up award-winning New York architect John Ike, interior designer Geoffrey Bradfield and Horizon Builders to gut and expand the home to cover four floors, nine bedrooms and more than 30,000 square feet.

Custom wrought-iron doors lead in to a two-story reception hall with coffered ceilings and a magnificent 24-foot-tall limestone fireplace. On this main level there’s a vast living room with floor-to-ceiling windows leading on to a balcony with stunning views across the Potomac.

The fireplace at the entry.  Courtesy Sean Shanahan/TTR Sotheby's International

While the second level features four bedroom suites, the third level is dedicated in its entirety to the master with his-and-her spa-inspired bathrooms, a separate sitting room, dressing rooms and expansive office.

On the lower level you’ll find a mahogany-paneled club room, wine cellar and recently-installed movie theater. Large windows open out onto a vast patio with a path leading to the infinity-edge pool and covered loggia.

Mimicking the style of the main house is a separate guest house with garaging for six cars on the lower level, and two guest suites above, with a separate kitchen, living and dining rooms.

If you’re worried that parking for six cars won’t house your collection of classic Ferraris, know that there are a further six bays at the main house.

Entry to the estate is through imposing gates on River Road, which lead to a half-mile-long cobblestone driveway. Also on the property is a separate two-bedroom manager’s house at the north end.

“This is truly a remarkable property,” says listing agent Michael Rankin, of TTR Sotheby’s International Realty. “Its 15 acres provide privacy and space that is unrivaled and unavailable elsewhere in the Washington area.”

Sadly, there’s no place to dock the Lady S on this stretch of the Potomac or the Snyders might not be selling.