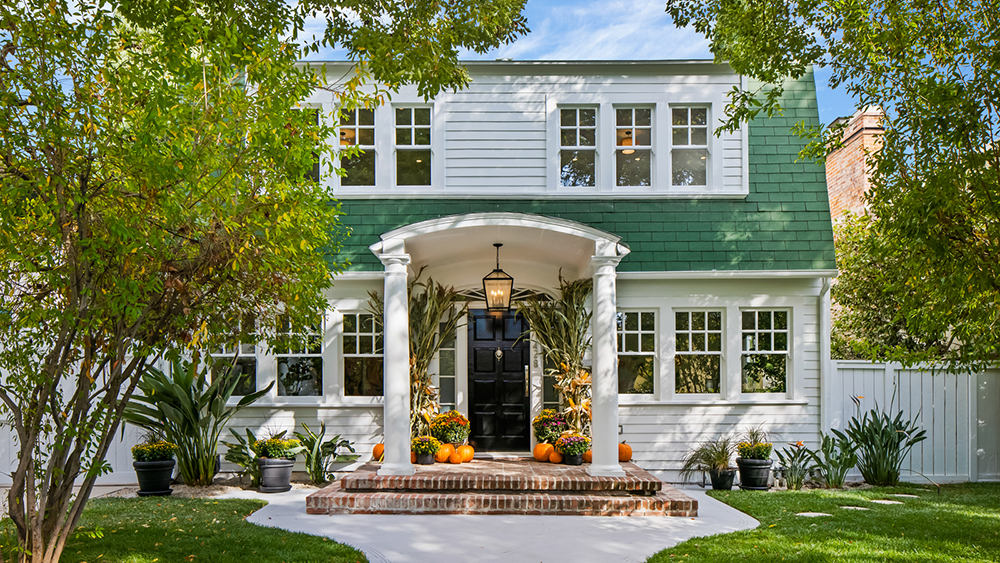 Horror fans, rejoice—one of the genre’s most recognizable residences has just hit the market for $3.2 million. Situated in the Spaulding Square neighborhood of Los Angeles, the house’s façade was prominently featured in A Nightmare on Elm Street as the home of main character Nancy Thompson. Move quickly if you want to snap it up, though, as the listing agents are only taking offers until Halloween.

While in the films the 2,700-square-foot pad was located at 1428 Elm Street in the fictional town of Springwood, Ohio, the actual address is on North Genesee Avenue. The terrifying Freddy Krueger is still hanging around the property though, or at least until it sells—in addition to traditional promo photos, listing agents Heather T. Roy and Learka Bosnak of Douglas Elliman also staged a shoot of the villain performing mundane tasks around the house. (Only this time around it’s their teammate, Matthew Ingraham, who’s behind the mask. An extensive musical theater background helped him get into character.)

The home’s interiors were not featured in the the 1984 film, but they were practically a second character in another movie that came out earlier this year. Lorene Scafaria, the director of Hustlers and Seeking a Friend for the End for the World, bought the home in 2013, and the backyard guest house looks remarkably similar to the set of Bo Burnham: Inside. Given that the two have been in a relationship for many years, it seems highly likely that Burnham shot the comedy special there.

As for the property itself, it’s got more than just silver screen references going for it. It’s a three-bedroom, four-bathroom parcel with a backyard pool, walnut floors, impressive archways and bright windows to let the light living areas. There’s a reason for the striking interiors: The home dates back to 1919 but was meticulously restored in the mid-2000’s to suit contemporary buyers’ interests. That old-meets-new appeal is compounded by the fact that the neighborhood is very unique for Los Angeles. “It doesn’t look like California,” Roy tells Robb Report. “It’s tree-lined and has traditional houses.” Hence why it could pass as a piece of Ohio real estate in Wes Craven’s classic horror film.

Krueger reading up on some recipes in the kitchen  Anthony Barcelo

Even if you don’t end up purchasing, Roy and Bosnak will be handing out candy at the home on Halloween for trick-or-treaters. “It’s a huge trick-or-treating area,” says Bosnak. “We’ve gone there over the years with my daughter. People go all out.”

Check out more photographs of Krueger around the house below:

Krueger does some laundry.  Anthony Barcelo

Krueger in one of the bathrooms.  Anthony Barcelo