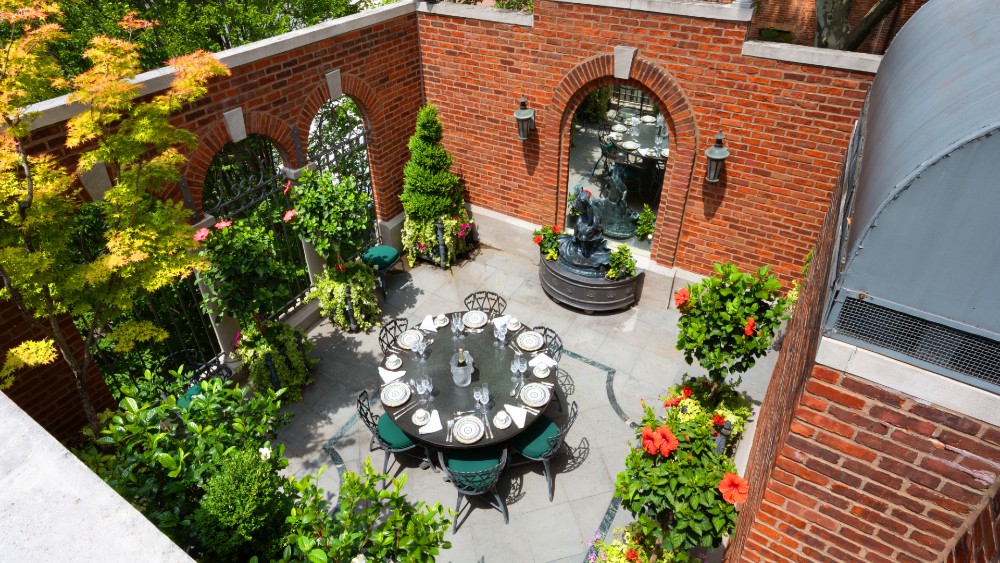 The biggest deal maker in the New York City real estate game is more than ready to step out of his palatial digs. Businessman Ken Laub has recently relisted his Upper East Side townhouse for $17.5 million, half of its peak asking price in 2007 for $35 million (the home originally hit the market in 2003).

Listed with Ryan Serhant, star of Bravo’s Million Dollar Listing, the five-bedroom, pre-war home elicits awe at every turn, but we’re especially partial to the spectacular 400-square-foot patio, a gem in Manhattan real estate, but an especial boon in the Covid-19 era. “The fourth-floor terrace makes it feel like you are vacationing in the Italian countryside. It is lushly planted, with a fountain, red brick, arched cutouts, and wrought-iron railings,” says Serhant of the meticulously designed space, which also features a surround-sound system and theatrical lighting for, you know, the fine day when you can finally throw parties again. For more casual outdoor entertaining space, there’s a small garden space in the back of the home.

Originally built in 1872 by architect John Prague, the understated yet elegant limestone and red brick exterior was designed by the same team that handled the restoration of St. John the Divine. The home’s interiors were created by décor maestros Ronald Bricke & Associates. With the finest level of craftsmanship evident throughout the home, a few standout features include the master bedroom with ensuite bath, a home office, private gym and the first-floor entranceway with its marble floors, mahogany doors, painstakingly hand-painted Chinese panels, a regal staircase and powder room.

European-inspired details are throughout the home.  Photo: Nico Arellano

The exterior also has its own statement-making illumination system along with a radiant snow-melting system in the blue limestone sidewalk (as well as the fourth-floor terrace). Last but not least, there’s a 300-bottle wine cellar.

The kitchen has all the modern bells and whistles.  Photo: Nico Arellano

The home was restored by the same team who worked on St. John the Divine.  Photo: Nico Arellano