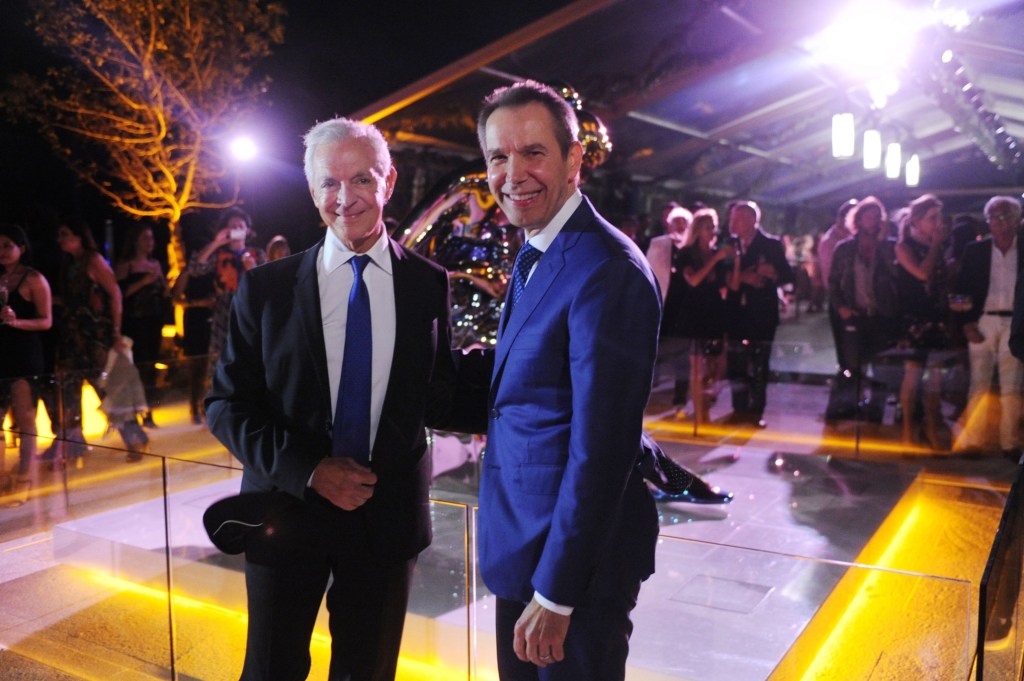 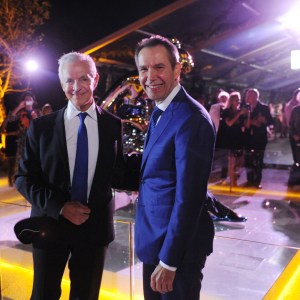 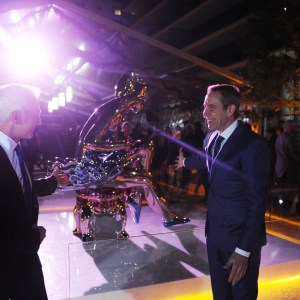 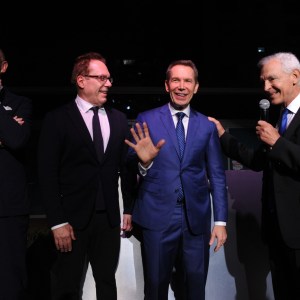 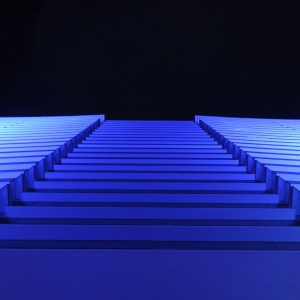 “My philosophy in real estate as well as in collecting art is to have the best; In all of my projects, prime location, five-star service, innovative design and the latest technology are all a must,” said Eduardo Costantini, chairman of Consultatio Real Estate. “Likewise, in collecting works of art, I choose only some pieces—the most important—by a given artist in hopes that those surrounded by the works experience more personal contact with art in their daily lives,” he said.

Costantini and Koons headlined an evening by the sea with some of the most important figures in the art world to debut one of the most expensive art installations in a residential complex including Jeff Koons’ larger-than-life sculptures Seated Ballerina and Pluto and Proserpina. Notable guests included interior designer Piero Lissoni, landscape architect Enzo Enea and architect Bernardo Fort-Brescia, the star team behind the development, Jorge Mendez Blake, Garth Weiser, Jeffrey Deitch, Mayor Philip Levine, amongst others.

Costantini, the founder of arguably the most impressive Latin American modern art museum, MALBA in Buenos Aires, carefully selected the star team of architects and interior designers, interior designer Piero Lissoni, landscape architect Enzo Enea and architect Bernardo Fort-Brescia, to curate an environment that reflects the beauty of the property’s natural surroundings and its architecture. The art collection, curated by Costantini himself, plays a large role in the overall concept and core of Oceana Bal Harbour. His vision was to create a very particular art discipline up to par with the caliber of the unparalleled spaces he creates.

Unprecedented, the entire multi-million-dollar collection, which will become shared assets of the residents of Oceana Bal Harbour, is composed of abstract, conceptual and site-specific commissioned pieces designed in different art forms: paintings, sculptures, installations and objects.

The night fêting the property’s grand debut kicked-off with special remarks by Mr. Costantini who recognized the key players behind his Oceana Bal Harbour and thanked everyone for attending and Jeff Koons who spoke to the incredible vision of Costantini and his impact in the confluence of art and life. Art enthusiasts, residents and art collectors mingled over Veuve Clicquot and bites catered by Oceana Bal Harbour’s world-class residents-only restaurant, Ballerina by Starr Catering Group, founded by revered Philadelphian restaurateur Stephen Starr and Simon Powles. Attendees toured Oceana’s impressive artful lobbies and its outdoor amenity deck as the musical dynamic duo The Dolls’, Mia Moretti and Caitlin Moe, marveled the crowd.

Oceana Bal Harbour has now begun to close on the multi-million dollar units as the residents eagerly anticipate their move.The 240-unit tower features 5.53 acres of land with 400 feet of pristine beaches. With homes priced from $3 to $30 million, the artful development offers resort-style five-star amenities, including a 24-hour concierge service, an upscale poolside restaurant, a world-class spa, valet parking, private cabanas, a relaxation pool and Olympic-style lap pool, a grand salon with chef’s kitchen and bar, a kids activity room, a cinema, underground parking, and more.

WORKS IN THE COLLECTION

Jeff Koons, the most expensive and prolific living artist in the world, is known for his often controversial and always engaging works, which typically explore contemporary obsessions in pop culture including sex and desire, race and gender, celebrity, commerce and fame.

Pluto and Proserpina, which is part of Koons’s Antiquity series, represent the change in seasons and the passions of life and nature experiences as an opportunity for transcendence. The stainless-steel masterpiece, viewable from Miami Beach’s buzzing Collins Avenue, will hold court in the residential tower’s breezeway, which frames a stunning view of the ocean, giving the illusion that the mythological figures are floating over the sea. The gold mirror-polished sculpture recently toured some of the top museums around the world, including the Whitney, the Pompedou, the Guggenheim and MALBA, as part of Koons’s first-ever retrospective.

Seated Ballerina, also part of Koons’s Antiquity series, was reimagined by Koons from a porcelain of a ballerina found in a Russian factory at the turn of the 20th century. Her presence will grace Oceana’s beachside gardens, bordering the Atlantic Ocean. The Antiquity series explores themes such as beauty, fertility, love and the connectivity in the artistic dialogue that spans the history of man.

Jorge Mendez Blake is a Mexican-born artist well-known for drawing connections between literature and the visual arts through assemblage, drawing and environmental interventions.

Spanish painter Juan Usle, based in New York, is famous for his discontinuous brush strokes. His works of abstractions are constructed with translucent layers of handmade saturated colors made to fill the world with silence. In a world of distractions, his paintings call attention to the experiential, to make viewers conscious of time and space; through touch and mellifluous surface, people are reminded of the importance of their sensory capacity.

“Soñe que Revelabas (Okawango) 2016” and “Soñe que Revelabas (Ganges) 2016”: Usle calls his striated brushstroke painting a “cleansing exercise”, which he made by pressing against the canvas as he moved horizontally across the surface, from one side to the other, making row after row. For Usle’s two pieces, which will grace the property’s two lobbies, he focuses on the continuity and discontinuity, light and shadow, material and illusion as the drivers of Usle’s inimitable body of work. The works reflect the rhythm and reflection of the body of water that surrounds the property.

Garth Weiser is a New York-based artist influenced by pop culture and corporate design from the 1980s and 1990s. Weiser’s paintings challenge perception with their grids and abstract geometrical composition. Weiser’s linear compositions employ texture, color, and light to challenge the viewer’s visual expectations and to explore the nature of perception. Though meticulously planned and highly structured, his work feels organic and effortless, blurring the lines between reality and illusion.

The two commissioned works, Pasted Graphic 1 2016 and Pasted Graphic 2 2016’s surfaces absorb light and reflect it unevenly, keeping the viewer mobile by optical instability. Technique is very important to Weiser’s practice, and he puts distinct emphasis on the way the paint is physically applied to the canvas. His process often begins with layering a thick impasto or relief outline on the canvas before applying paint, creating a three-dimensional depth with an atmosphere of light that implies architectural space.

For his ongoing series of “Exposed Paintings”, Innes engages in a process of addition and subtraction, layering pigments onto the canvas, and then removing the oil paint with washes of turpentine. This method, which he describes as “unpainting,” leaves only traces of the paint’s former color so that black oil paint erodes to reveal a deep violet or green.

Taryn Simon: Paperwork and the Will of Capital 2015: “Agreement to develop Park Hyatt St. Kitts under the St. Kitts & Nevis Citizenship by Investment Program” and “Agreement to conduct impact studies of the Grand Ethiopian Renaissance Dam on neighboring countries”

Taryn Simon is a New York-based multidisciplinary artist who has worked in photography, text, sculpture, film/video and performance. Her practice involves extensive research, guided by an interest in systems of categorization and classification.

In Paperwork and the Will of Capital 2015, Simon recreates and photographs floral centerpieces that witnessed the exercise of power in 36 signings of historical treaties and accords from 1968 to 2014. During signings of political agreements, contracts and treaties, the governing leaders’ floral centerpieces conveyed the importance of signatories and the institutions they represented. The images shed light on the artifice underlying politics.

The two pieces in the Oceana Bal Harbour collection from Paperwork and the Will of Capital 2015 were photographed against backgrounds keyed by the original decor of the historic ceremonies and custom-framed in mahogany to mimic the style of boardroom furniture.

An Te Liu is a Taiwanese installation artist and sculptor based in Toronto whose work is influenced by his background in art history and architecture. Liu’s work tackles the legacy of modernist design from a postmodernist perspective. Site and space are key materials for Liu as he explores issues of function, dysfunction and cultural coding in built and hypothesized environments. Using a range of artistic strategies, he reveals unsuspected cultural resonances embedded in everyday found materials. By repurposing common household items, such as wallpaper or T-shirts, Liu points to new readings for these items and their wider social implications.

Mono No Ma 2013: Liu has transformed discarded Styrofoam packing from consumer goods into ceramic sculptures that evoke a multiplicity of references. While each sculpture bears the imprint of an object in use today, the ambiguity of their origin invites reflection upon the viewer’s relationship to things practical and artistic, old and new.

Tropos features a trio of sculptural columns fabricated from multiple cast pieces made from concrete and hydrostone (a hard, strong plaster). Each of the Tropos works are named after a famous female Modernist writer or artist; Tropos III/I/I (for Gertrude Stein), Tropos I/II/I (for Djuna Barnes) and Tropos IV/III/I (for Mina Loy)