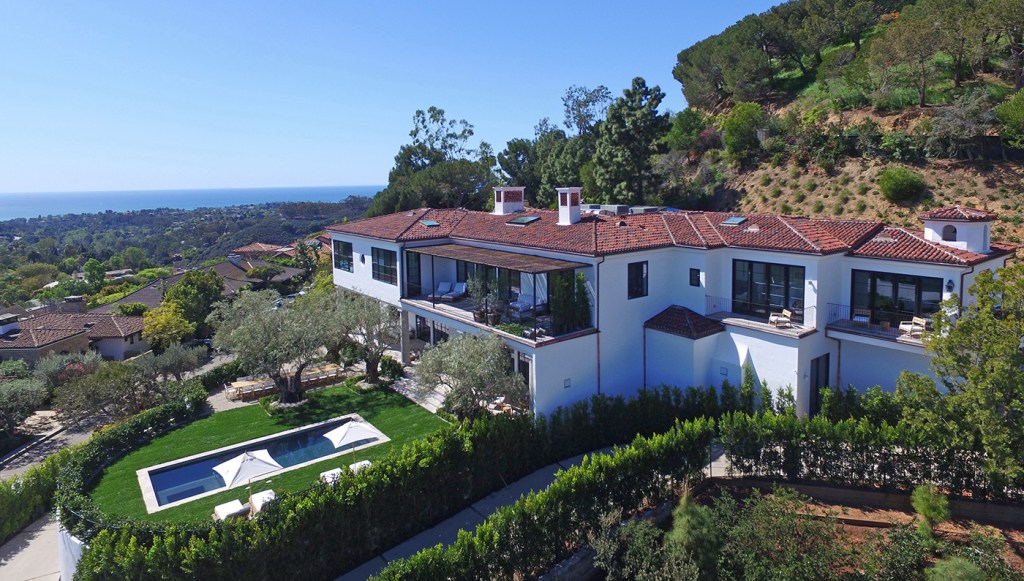 In 1980, former California Governor Ronald Reagan was taking a shower in his Pacific Palisades home when the phone rang. Jimmy Carter was on the other line with a piece of life-changing news: “Mr. Reagan? Congratulations. You’re President of the United States.”

Thirty-six years later, Malibu-based boutique real estate development company Jaman Properties has built a new home at 1669 San Onofre, incorporating elements from the Reagans’ abode into a new Spanish Revival-style house that is, fittingly, white. Situated in the Santa Monica Mountains, the 12,000-square-foot home retains the shower door (along with a plaque outlining the historical significance of the spot) and the original bar where Reagan often gathered trusted advisors during his presidential bid. The six-bedroom home is equipped with French oak floors, custom cabinets, and antique light fixtures. Unique features include wallpaper in the first-floor powder room made from 25,000 hand-laid peacock feathers and a 3-D printed chandelier in the dining room that, when lit, casts shadows on the wall and other surfaces to give an illusion of a forest illuminated by moonlight. The screening room—which includes a bar with an under-the-counter refrigerator—is lined with cashmere fabric walls where iconic reprints from the Motion Picture Academy hang, including a page from the shooting script for North by Northwest (complete with Alfred Hitchcock’s notes) and a letter from Billy Wilder to Marilyn Monroe asking her to star in Some Like It Hot. Elvis Presley’s original army uniform hangs above the bar. The home is further furnished with Picasso and Warhol works worth over $1 million.

Outside, a formal courtyard is accentuated with gas lanterns and a 400-year-old limestone watering trough that now functions as a fountain. The backyard features a pool, dining area, and outdoor kitchen with a barbecue, wood-burning pizza oven, sink, and refrigerator. Wreathed by four 100-year-old olive trees, the property also includes an outdoor living space with a television and fireplace. The home is currently on the market for $29.7 million. (jamanproperties.com)