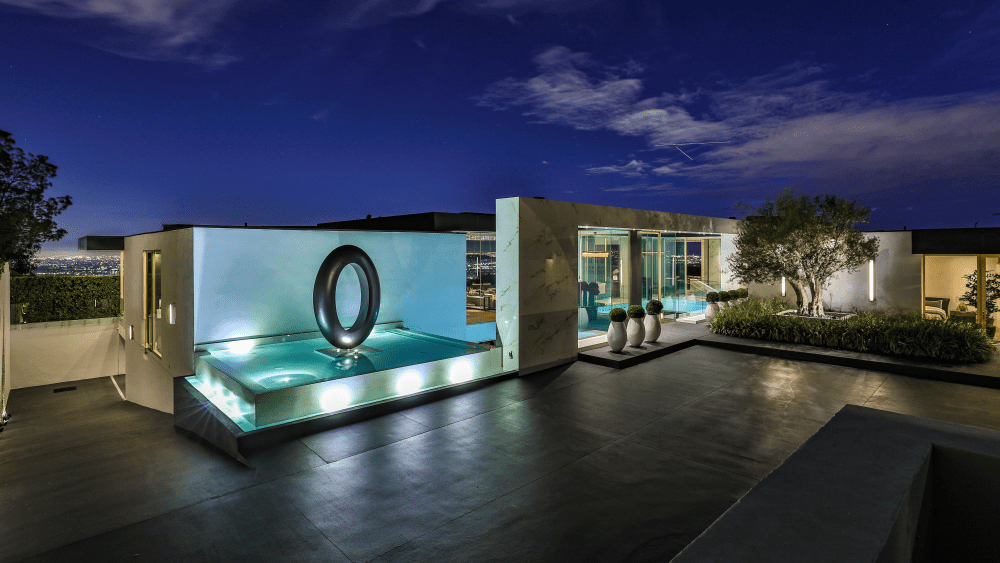 As far as sought-after California architects go, Paul McClean ranks at the top of the list. The designer is behind Los Angeles’s most expensive home, The One—which is projected to hit the market for a mind-boggling $500 million—plus a slew of other enviable properties, including one for video game producer and director Jason Rubin that was featured in Robb Report‘s pages last spring.

So it only makes sense that a listing like 1175 Billionaire’s Row, which was designed by McClean, is a remarkable one. The sprawling, 21,000-square-foot home is on the market for a staggering $60 million, complete with a dinosaur skeleton in the basement and a 12-car auto gallery that can be repurposed into an event space.

Situated in the prestigious Trousdale area of Beverly Hills, the locale is referred to as Billionaire’s Row because of its recent six-digit sales. Producer David Geffen, Minecraft creator Markus Persson and businessman Evan Metropoulos have all shelled out for property on the street in recent years, quickly transforming it into an enclave for the area’s wealthiest residents.

The living room, which opens up to the outdoor pool.

Even among such company, the 1175 address stands out as a real architectural feat. McClean designed the home to incorporate not one but two pools—one indoor and one outdoor. Much of the home revolves around these two amenities: Upstairs, the kitchen, living room and dining room all look out onto the 80-foot lap pool, which frames an unobstructed view of downtown.

Join us for tour of a proper LA gem courtesy of @williamsandwilliams.

Steps away from this pool is the master bedroom, which also benefits from these vistas, and features both a his and hers bathroom and walk-in closet. The closets are meant to look like a boutique shop—a skylight above lets some natural light in.

The dinosaur skeleton, which is adjacent to the downstairs pool.  Joel Reis / Zenhouse Collective

Downstairs, the water features continue. A pool is the centerpiece, and a waterfall flows into it. At the foot of the stairs is a dinosaur skeleton—albeit a work of art, not a genuine one, of course. The bright, airy gym has steps that lead directly down into the pool, and next to it is a massage room. Also included in the gym package are cold and hot plunge pools, dual showers and a steam room. Just off of it is a salon that’s perfect for hair styling, manicures, pedicures and more.

Also downstairs is a billiards room, home theater as well as many of the guest suites (the home has seven beds and eleven baths in total). What’s most spectacular, though, is the wine cellar and tasting room, which is temperature controlled and can fit 1,000 bottles. Elsewhere a 12-car auto gallery stylishly houses any of your prized marques, or, if you’re not a car person, it can just as easily be used as an event space.

Interested in scoping the place even further? Check out more images of 1175 Billionaire’s Row, below:

One of the master bathrooms.  Joel Reis / Zenhouse Collective

One of the walk-in closets in the master bedroom.  Joel Reis / Zenhouse Collective