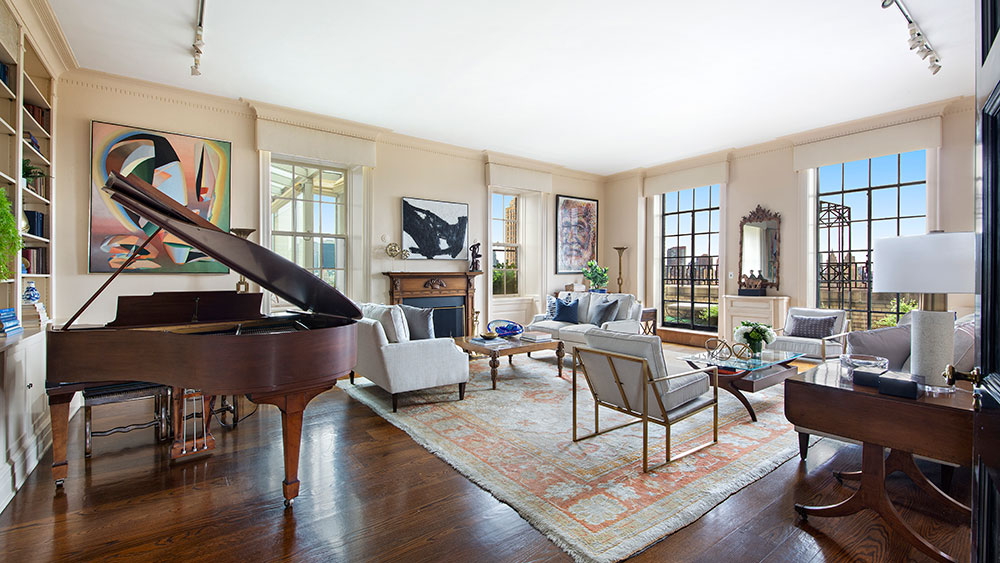 On the hunt for some lofty new digs that have a bit of history? Perfect timing—an apartment once owned by renowned musician and New York Philharmonic composer Leonard Bernstein has just hit the market for $29.5 million.

The approximately 6,300-square-foot duplex penthouse is on Park Avenue in the heart of the Upper East Side and has more than 14 rooms. It also has outdoor space aplenty, a boon in the age of shelter-in-place, with two private landings that total 700 square feet. There’s even a solarium with windows on all sides, so you’ll get plenty of sunlight throughout the day.

Naturally, the apartment has spectacular views of midtown and Central Park, but it’s the unit’s Bernstein pedigree that really sets it apart. In fact, it’s a true rarity on the market—Carol and Maurice Feinberg purchased the place from the Bernsteins in 1974, and it hasn’t been on the market since.

But the penthouse’s biggest claim to fame is undoubtedly a gathering that the Bernsteins hosted in 1970. It was a benefit in support of the Black Panther Party and was famously written about in New York magazine. The piece effectively coined the term “radical chic,” and put New York, a publication that at the time was just two years old, on the cultural map.

The writer, Tom Wolfe, had this to say about the apartment at the time: “In a way it was perfect for Radical Chic. The nice part was that with Lenny it was instinctive; with Felicia, too. The whole place looked as if the inspiration had been to spend a couple of hundred thousand on the interior without looking pretentious…”

Naturally, the penthouse has received a few updates since then, and per David Feinberg, the youngest son of Carol and Maurice, it’s likely that whoever will buy the place next will likely renovate it extensively—though he told The New York Times that it has “good bones.”

One of the outdoor spaces.  Warburg Realty

The building itself also has plenty of history, as it was originally constructed in 1929 and maintains that classic Art Deco style. Amenities include a fitness center plus a squash and basketball court.

It goes without saying, of course, that this penthouse is great for parties. Though it’s unlikely the future owners will be able to top the soiree held here back in 1970.