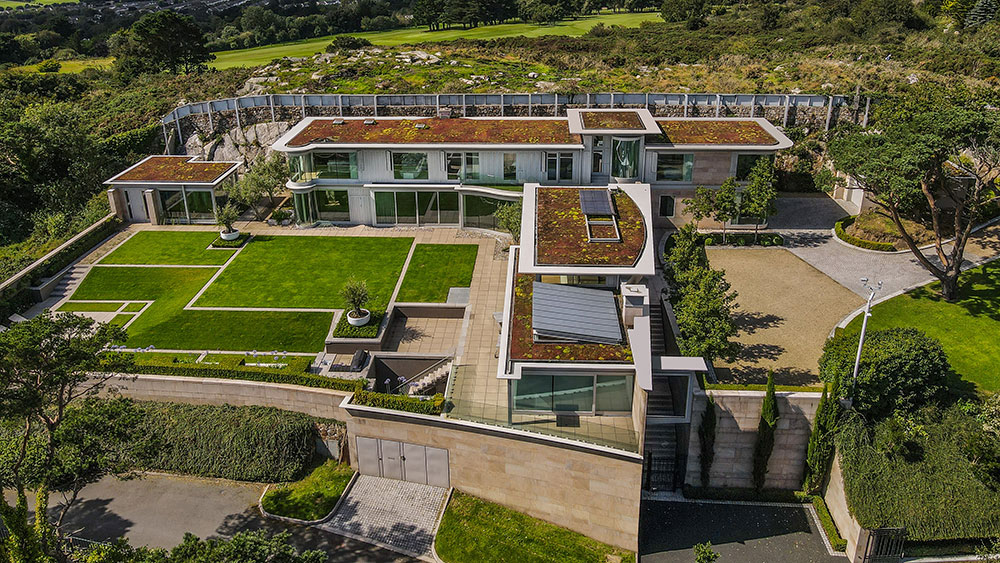 Sure, there are plenty of gorgeous homes out there, but not many are so distinctive that they’ve been featured in a movie. It’s a pedigree that this 10,000-square-foot home in Ireland enjoys, having been featured prominently in a Pierce Brosnan-led thriller flick.

The film in question is I.T., which wasn’t much of a blockbuster, despite its A-list leading man. In it, Brosnan plays a successful businessman who lives in a sprawling smart house—his company’s vengeful IT guy uses his home’s high-tech amenities to torment and stalk Brosnan and his family. The film was panned critically, despite its ambitious plot and architectural backdrops.

There’s plenty going for the house outside of its time on the silver screen, too. Altogether it has seven beds and six baths, plus two additional guest baths. The residence sits on about an acre of land in the Killiney area, a locale that’s been dubbed the “Amalfi Coast of Ireland” for its serene vistas and high volume of luxe seaside resorts.

Inside, the home isn’t quite as kitted out with smart home features as it was in I.T., but it still has plenty of details that make it shine. The living area has a climate-controlled, glass wine room; next to it is an office with views of the garden for working from home. The kitchen has Wolf and Gaggenau appliances.

The primary suite has spectacular views that overlook Killiney Bay and the nearby Wicklow Mountains, plus dual walk-in closets and an en-suite bath with Carrara marble. Outside there’s a garden, two separate areas for lounging and a separate gym building.

The home sits on about an acre of land.  Photo: Courtesy of Knight Frank/Douglas Elliman

The picturesque enclave is becoming increasingly popular, too. Matt Damon spent the early days of lockdown in nearby Dalkey—singer Enya and U2 frontman Bono also live in the area. Alas, Brosnan himself does not, but you can probably channel some of his movie-star mojo at this considerable estate.

One of the bedrooms.  Photo: Courtesy of Knight Frank/Douglas Elliman