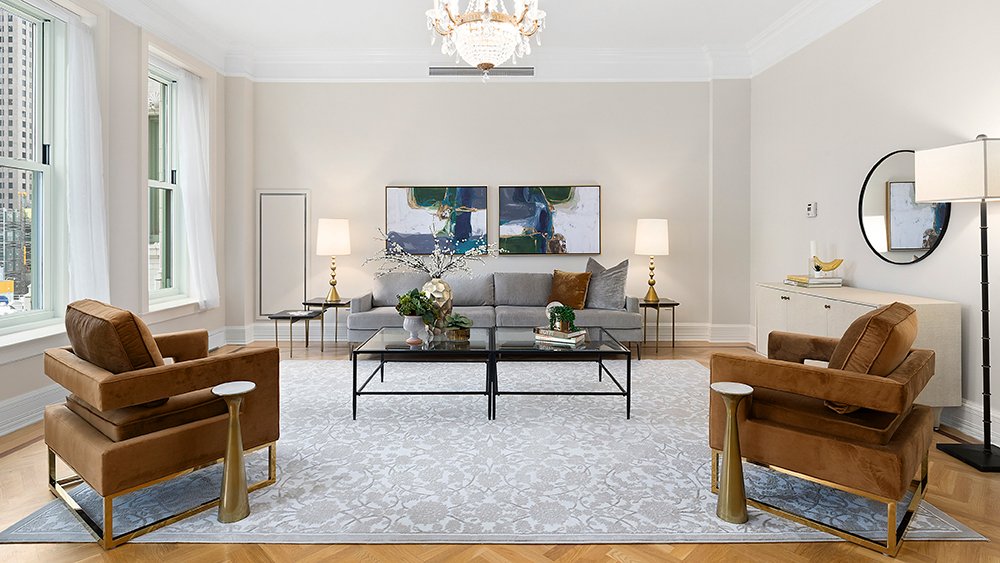 Even if you haven’t been to the legendary Plaza Hotel, you’ve at least heard of it—or come across it in pop culture: Macaulay Caulkin asked for directions in the lobby in the 1992 film Home Alone 2: Lost in New York, a scene from Baz Luhrmann’s The Great Gatsby movie where Gatsby attacks antagonist Tom Buchanan was shot here and the titular heroine of the beloved Eloise children’s book series famously lived at the hotel. Now you can snap up a permanent property here too, as a condo has just listed in the building for $6.5 million.

The home is part of the Plaza Private Residences, which is located in the same building as the hotel proper. There are 182 units here in total, and those who live there can use a separate entrance to access their property. The structure itself was designed back in 1907 by architect Henry Janeway Hardenbergh, who also worked on the original Waldorf Astoria hotel in New York City.

Another view of the living room.  Photo: Michael J. Franco/Compass

Inside, the two-bedroom home includes just about everything one would expect to find in a million dollar condo. Windows overlook Grand Army Plaza and Fifth Avenue below, and wide-plank herringbone floors run throughout the residence. The kitchen is equipped with Viking and Miele appliances; the primary suite includes two walk-in closets, room for a sitting area or home office and a large, en suite bathroom with an original mosaic tile design in the floor.

Residents will have access to all of the perks included with staying in a suite in the Plaza Hotel, which is operated by Fairmont Hotels and Resorts. There’s 24-hour room service and daily housekeeping, plus you’ll have direct access to restaurants such as the Palm Court and other social spots, including the Champagne Bar.

That’s not to say it’s for everyone. Tommy Hilfiger shopped his penthouse at the Plaza Private residences for many years before it finally sold in 2019 for $31 million, a nearly $50 million discount from its original $80 million asking. A similar but more lavish penthouse hit the market here last year for $45 million, and while it seems to be no longer up for grabs for the time being, a different uppermost home is still available for $15 million.

It has been said that “nothing unimportant ever happens at the Plaza.” If you subscribe to that old adage, then it may be time to add another condo to your portfolio.

One of the bedrooms.  Photo: Michael J. Franco/Compass