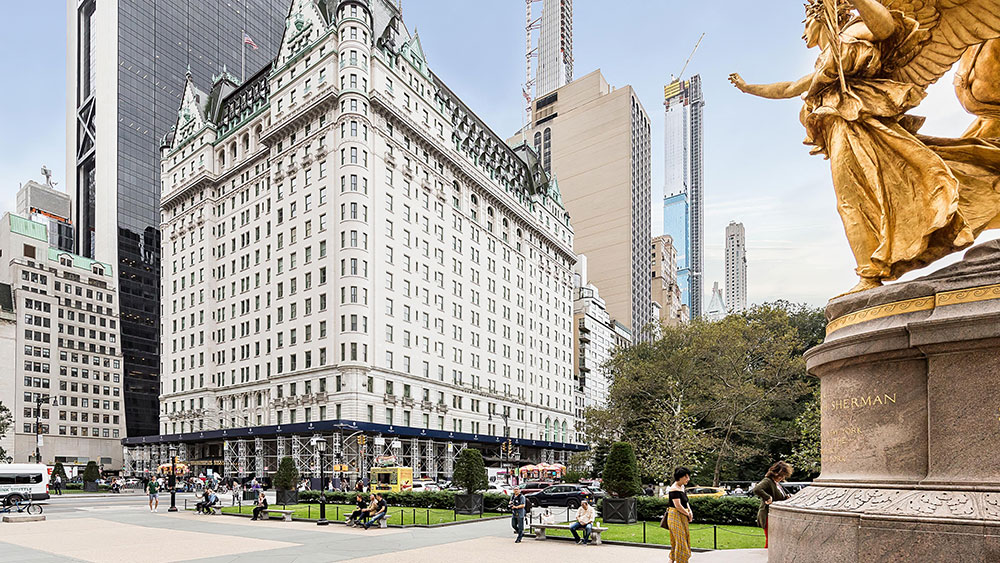 If, like young Macauley Culkin, you’ve suddenly found yourself Lost in New York, don’t bother with trying to find the Plaza Hotel’s lobby—instead, head straight up to the top floor, where one of the penthouse residences has just listed for $45 million.

One of 182 private condos in the landmarked building, the 5,300-square-foot unit’s opulence befits its Plaza Hotel pedigree, with high ceilings, crystal chandeliers, gold leaf décor, period moldings and custom touches throughout. The great room, for instance, incorporates one of the building’s turrets, with three side-by-side windows affording spectacular views of Central Park and beyond.

The four-bed, four-and-a-half bath’s other flagship offering is its master bedroom: A sprawling suite with designer wallcoverings and a spa-like bathroom made of floor-to-ceiling imported onyx. Also included in the layout is a separate dining room, a wood-paneled study, a personal library and a galley style kitchen.

The turret lookout in the great room.  Douglas Elliman

The penthouse and other residences are all accessible via a 1 Central Park South address, a separate entrance from the main hotel at 768 Fifth Ave. Amenities available to the new tenants, beyond the cachet of being able to say you live in the Plaza Hotel, include access to a private, European-inspired garden, as well as exclusive access to the Plaza’s Oak Bar, the Palm Court Restaurant, the Plaza Food Hall and the Oak Room event venue.

Exciting stuff, to be sure—but even the Plaza Hotel residences aren’t immune to an ever-softening real estate market. Tommy Hilfiger, for instance, attempted to sell his penthouse at the Plaza for 11 years, originally offering it at $80 million before a series of price cuts led to it being sold for $31.25 million in October. The owners of this penthouse, Russian real estate moguls Olga and Valery Kogan, have set expectations with their unit’s $45 million price tag; time will tell whether the market will reward them—or correct them.

Of course, if you subscribe to the old adage that “nothing unimportant ever happens at the Plaza,” then it might just be worth the splurge.

Check out more photos of the penthouse, below: