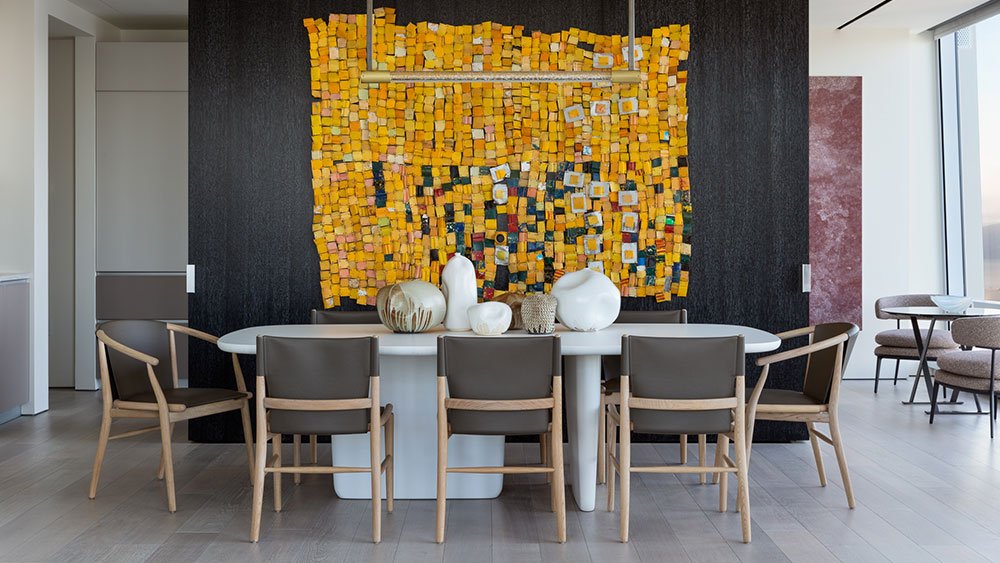 In the dining room area, Wargarment (2019) by Serge Attukwei Clottey hangs behind Jens chairs designed by Antonio Citterio, with Bush plum (2009) by Angelina Pwerle by the kitchen.

Located in the heart of San Francisco’s East Cut neighborhood, 181 Fremont is the tallest residential building on the West Coast. In addition to its 68 luxury units, it’s also an art gallery, with an exhibition showing over 20 artworks by 15 Black artists running now until the end of December.

The show, dubbed Podium, takes place within a staged apartment, one that you can in fact buy for $6.8 million (artworks not included). Art advisor and consultant Holly Baxter curated the show, and design elements were selected by the interiors practice at AubreyMaxwell—for the latter, the team opted to use only B&B Italia furnishings, with the exception of a few rugs from cc-tapis.

The artworks range from painting and sculpture to photography and mixed media. Since the show is in an apartment, they’re spread out across many different rooms, so it’s less white wall gallery and more open house at a collector’s stylish digs. 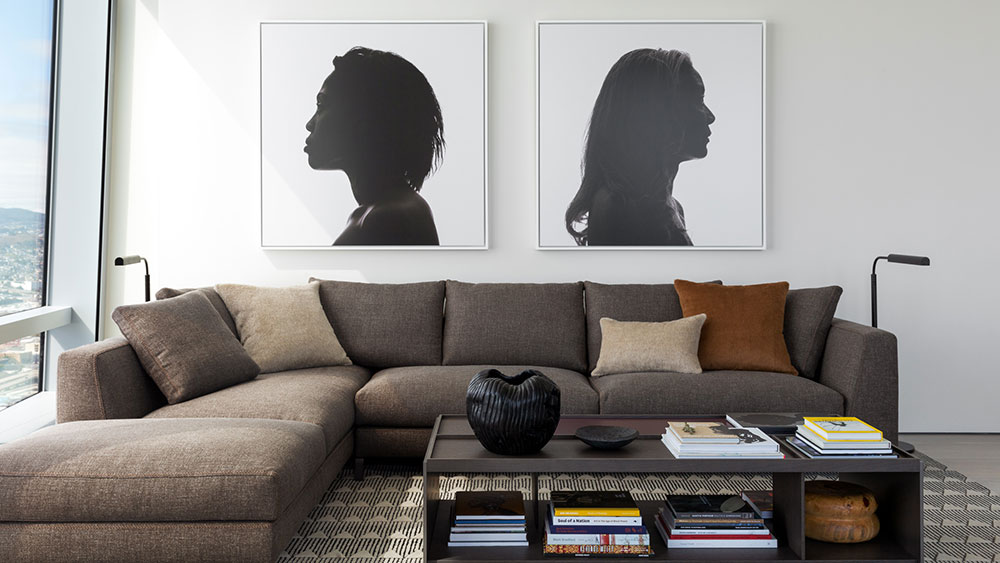 That’s apparent right as you step across the front door, where there’s a colorful range of artworks paired with a bright carpet by Patricia Urquiola. On one side of the hallway is The Intoxicated Patient (b) (2019) by Moffat Takadiwa, a piece made of recycled alcohol and detergent bottle caps that reflects the artist’s concerns with consumerism and inequality. On the other is A Children’s History of Invisibility (2016), a collection of 26 encyclopedia entries with children’s block letters drawn over them by multimedia artist Tavares Strachan. Growing up, Strachan spent hours reading Encyclopedia Britannica—Invisibility is his reworking of the text, which incorporates those who are often forgotten or unseen. 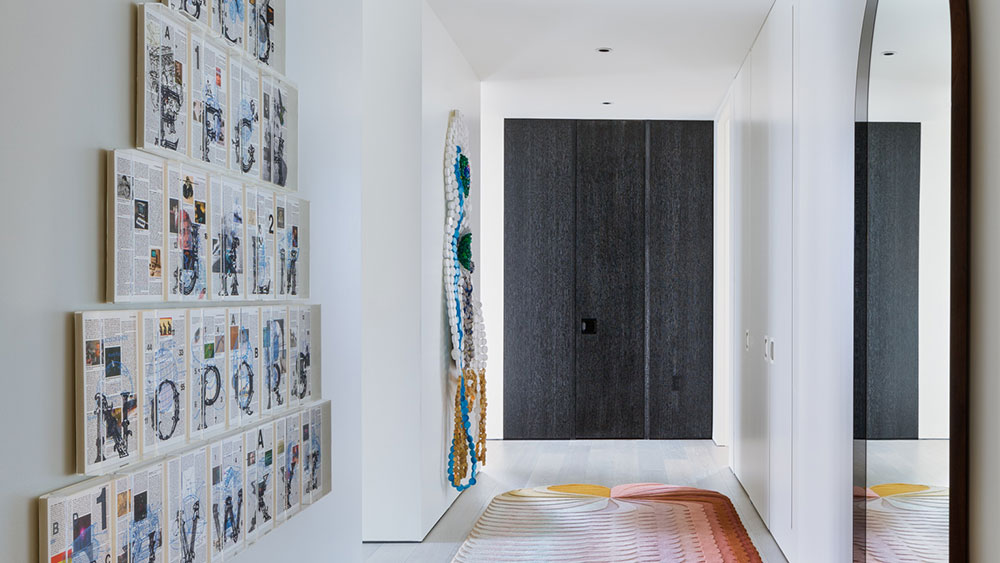 From left to right: A Children’s History of Invisibility (2016) by Tavares Strachan and The Intoxicated Patient (b) (2019) by Moffat Takadiwa. The carpet is Slinkie by Patricia Urquiola for cc-tapis.  Photo: Tim Coy

The great room of the 2,314-square-foot unit features Good Jazz (2017), a silent video by multi-disciplinary artist Jibade-Khalil Huffman, as well as two portraits by photographer Erica Deeman, Untitled 30 (2014) and Untitled 16 (2013). Behind the dining table is Wargarment (2019) by Serge Attukwei Clottey, which is made of repurposed plastic from the yellow water containers used during the drought in Ghana in the early 2000s. Years later these containers are still being used, though many believe they in fact leach harmful chemicals into water. Here, Clottey cuts these vessels up and stitches them together with copper wire so they resemble a large tapestry, giving a second life to these pollutants. 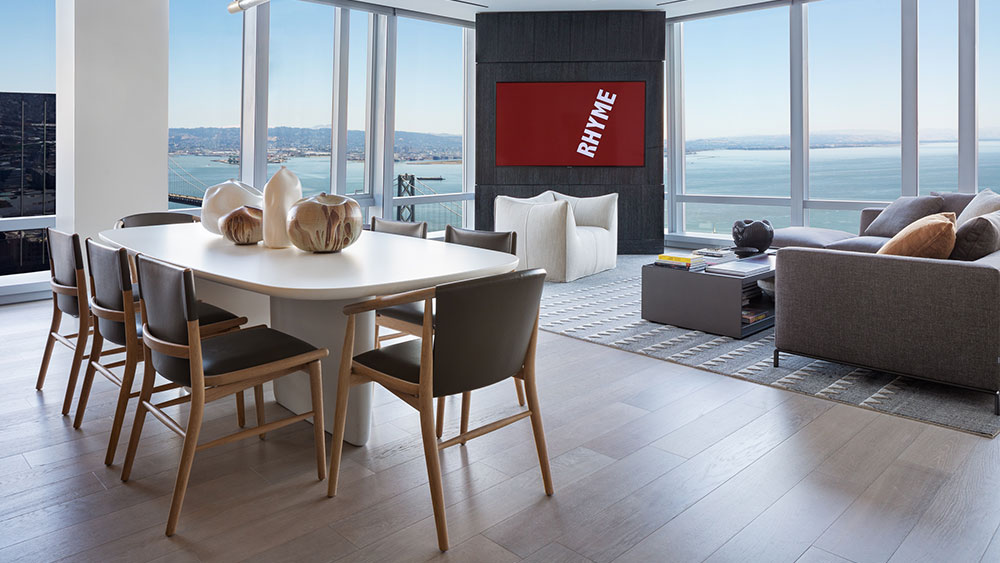 Good Jazz (2017), a silent video by multi-disciplinary artist Jibade-Khalil Huffman is paired with a carpet by David/Nicolas for cc-tapis and a lounge chair by Mario Bellini for B&B Italia.  Photo: Tim Coy

Each of the three bedrooms also has an artwork or two, starting with the primary, which features Looking Back 1 (2014-2015) by Lava Thomas, a drawing based on a photo the artist found in her grandmother’s album, as well as one of the pieces in Angela Hennessy’s Bling (2018) series. The chains, made of both synthetic and human hair—some the artist’s—are designed to evoke accessories that adorn the body, but also the bonds of slavery. 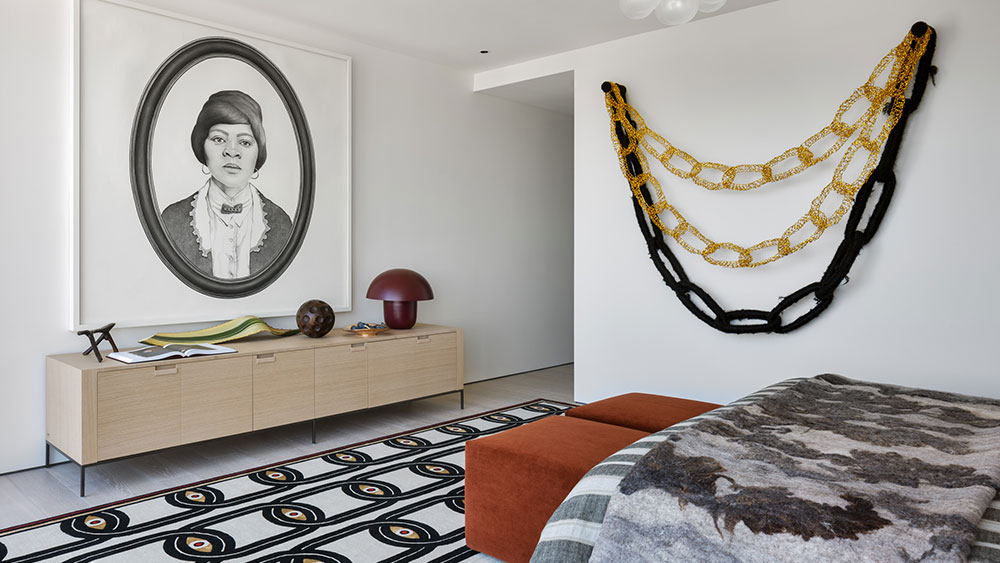 From left to right: The primary bedroom features Looking Back 1 (2014-2015) by Lava Thomas and one of the pieces from Angela Hennessy’s Bling (2018) series. The rug is Eyes in Chains by Federico Pepe.  Photo: Tim Coy

In one of the guest rooms is a photograph by Chanell Stone, In search of a certain Eden (2019), and in the other, another pair of portraits from Erica Deeman: Gregory (2016) and Blue (2016). In the kitchen is Cyborg 2# Twilight/Mirror/Radioactive series (2018) by filmmaker and artist Isaac Julien, which is inspired by “The Parable of the Sower,” a story in which a cyborg woman loses her husband and son in an atomic blast that destroyed the Earth. Adjacent is Bush plum (2009) by Angelina Pwerle, an Australian artist who here takes inspiration from a time when spirits roamed the earth. 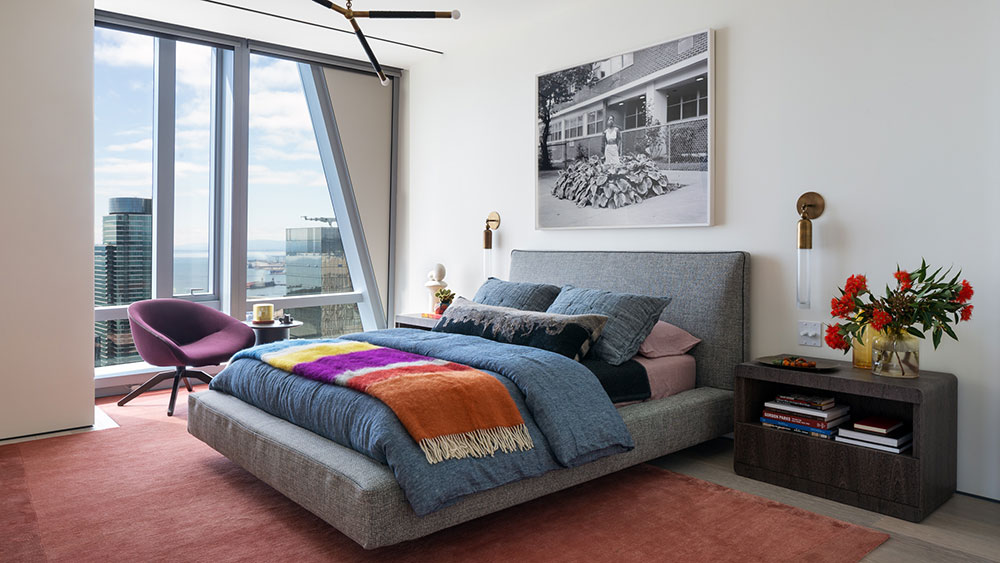 One of the guest rooms, which shows a photograph, In search of a certain Eden (2019) by Chanell Stone.  Photo: Tim Coy

Podium is open by appointment only, and, while the artwork isn’t included in the apartment’s cost, if you like the place enough, you can purchase some of the pieces for an additional fee and keep it looking as is.

Check out more photos of the exhibition, below: 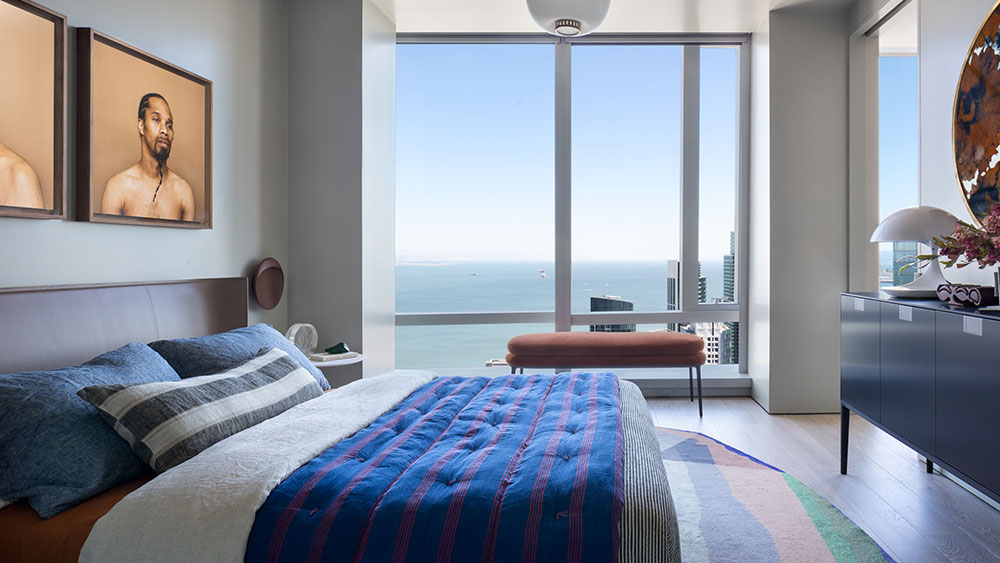 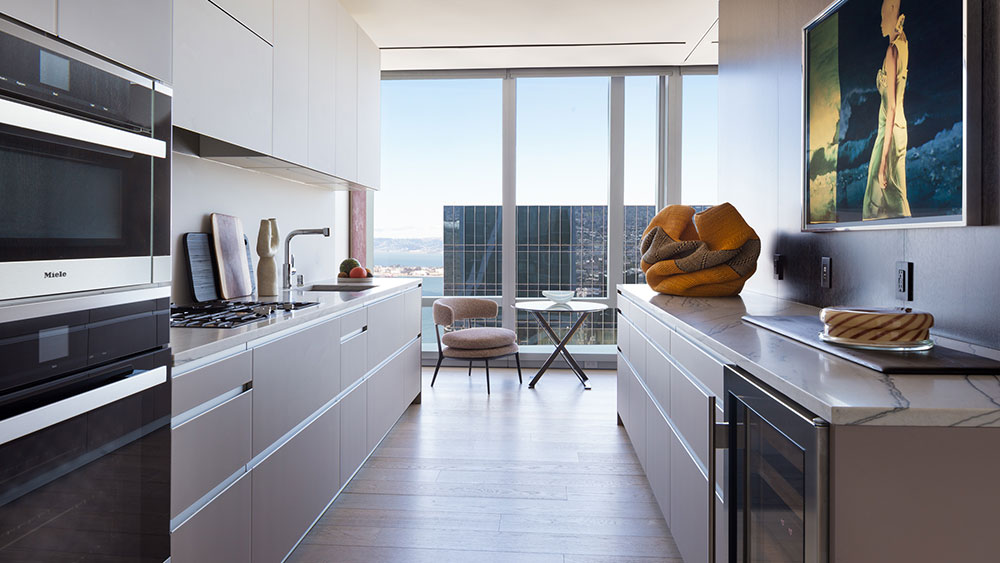 The kitchen, with Miele appliances and Cyborg 2# Twilight/Mirror/Radioactive series (2018) by Isaac Julien hanging above the marble countertops.  Photo: Tim Coy 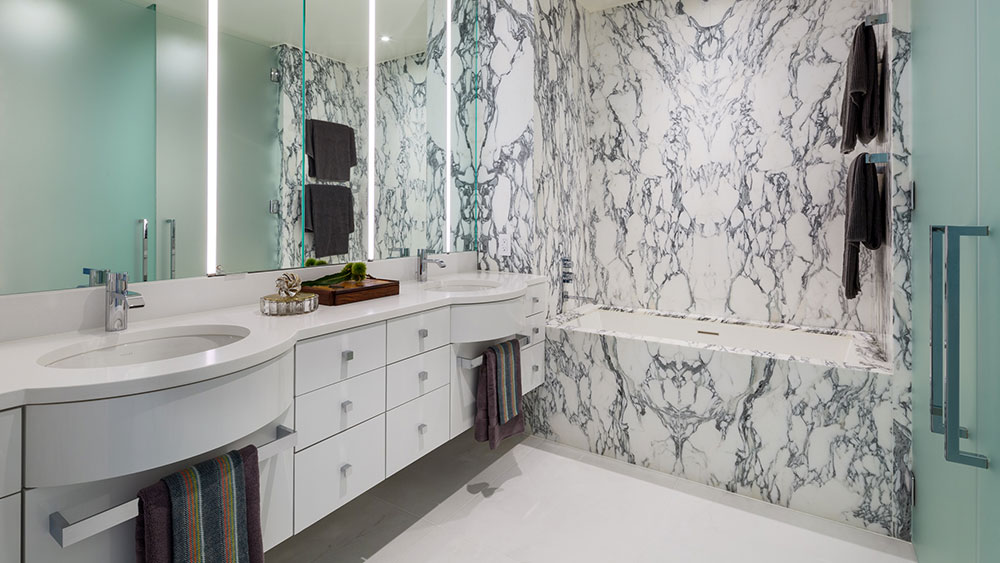