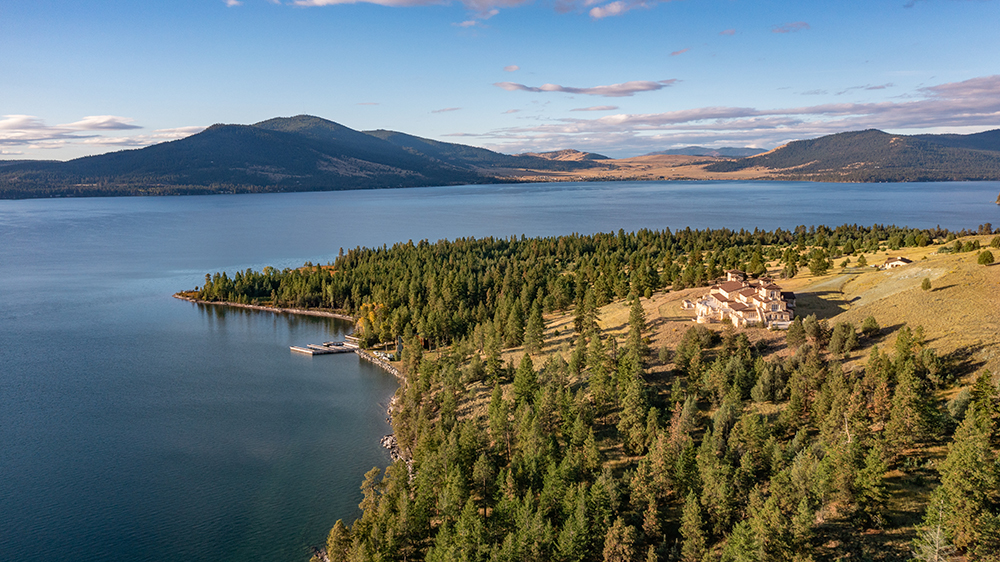 Properties in Big Sky Country are always big on natural beauty. This newly listed private island is no exception.

Located on Montana’s Flathead Lake, Cromwell Island spans some 350 acres and showcases the very best of the western state. Priced at $72 million, the property comes complete with an unfinished 45,000-square-foot villa that you can tailor to your tastes, a two-bedroom guesthouse and a dock with five boat slips. Boasting 3 miles of shoreline, the island also offers direct access to the largest freshwater lake west of the Mississippi River.

Cromwell Island is being sold by Anne Brockinton Lee, widow of Robert M. Lee, who founded the luxury bag line Hunting World. The couple snapped up the rugged haven in the 1980s after discovering it on a fishing trip, according to The Wall Street Journal. When their agent asked if they would consider purchasing an island, “we went, ‘Bingo!’” she recalled. The property reportedly had three separate owners at the time, and Lee can’t recall how much they paid for it initially.

A front-facing view of the 45,000 square-foot villa on Cromwell Island.  Courtesy of Bill McDavid

The couple originally intended to create a nature reserve on the island, but ended up building a five-bedroom residence that they could fill with antiques instead, as reported by WSJ. With only the exterior of the villa complete, construction stalled in the late ’90s when the Lees relocated to Lake Tahoe.

There’s no question that home has incredible potential, though. With terra-cotta roofing, mahogany windows and solid brass fixtures throughout, it looks like it belongs on the Italian Riviera. It’s also built to withstand all manner of natural disasters. The foundations are made from a mix of concrete and Montana limestone as opposed to wood, while the underwater cables ensure there is a steady power supply. There’s also a backup generator capable of generating off-grid power for 8 to 12 weeks in case of emergency.

Scenic views of the property’s shoreline and dock.  Courtesy of Bill McDavid

Best of all, listing agent Bill McDavid of Hall and Hall tells Robb Report that you’ll be able to personalize the castle-like interior and floorplan. In the meantime, the 5,000 square-foot guesthouse stands to be a comfortable, temporary abode.

Check out more images below: