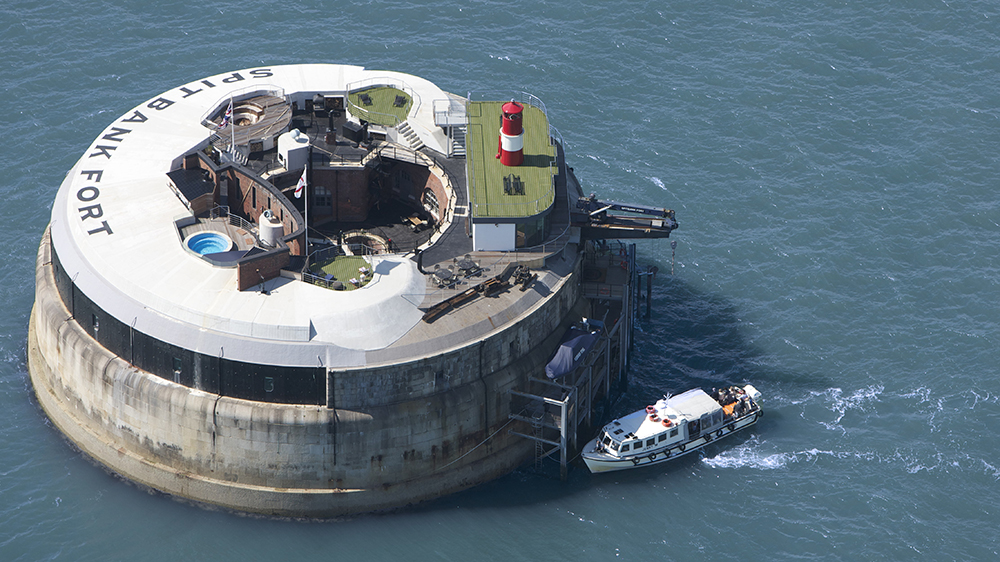 Even villains need some R&R now and then.

A former army fortress located in the English Channel has been converted into a luxury island oasis worthy of a Bond nemesis, and it was just put up for sale by the British real estate agency, Strutt & Parker. Well over 150 years old, the absurd compound has everything an evil mastermind could want, including a wine cellar, spa and even a casino. Truly diabolical.

The property, which is called Spitbank Fort, is one of three man-made islands built in the water surrounding the Isle of Wight by the British military during the 1860s and ‘70s, according to the New York Times. Primarily a defense outpost during much of its first century, the fortress has assumed several different identities since it was decommissioned during the middle of the last century, including turns as a museum, nightclub and boutique hotel.

Spitbank Fort was purchased by entrepreneur Mike Clare back in 2009, who extensively refurbished the 33,000-square-foot, three-story property, including adding a freshwater well. Rooms are arranged in two concentric circles around the center courtyard, with guest suites on the outside and a library and lounge on the outside. Other luxe amenities include two kitchens, a dining room that can sit 60, a sauna, training center, a pool, two sun decks, a fire pit and crow’s nest that overlooks the rest of the property and let’s you watch for suave spies. And while it has most recently been in operation as a hotel, the agent and owner say it can easily be turned into a private residence—or perhaps a sweet vacay spot for your average international organization of evil. We see you, KAOS.

A room inside the Spitbank Fort  Strutt & Parker

Unsurprisingly, your own fortressed island doesn’t come cheap. The asking price for the Spitbank Fort is just shy of $5.2 million, which any supervillain worth their salt should be able to afford. If it’s not exactly to your liking, the agent is selling two other forts in the area: the larger but un-refurbished No Man’s Fort ($5.5 million) and Horseands Fort ($970,000), which is more of a fixer-upper. Just remember: No matter which lair you choose, never explain the plan to 007 before leaving him to die. It never works out, man.