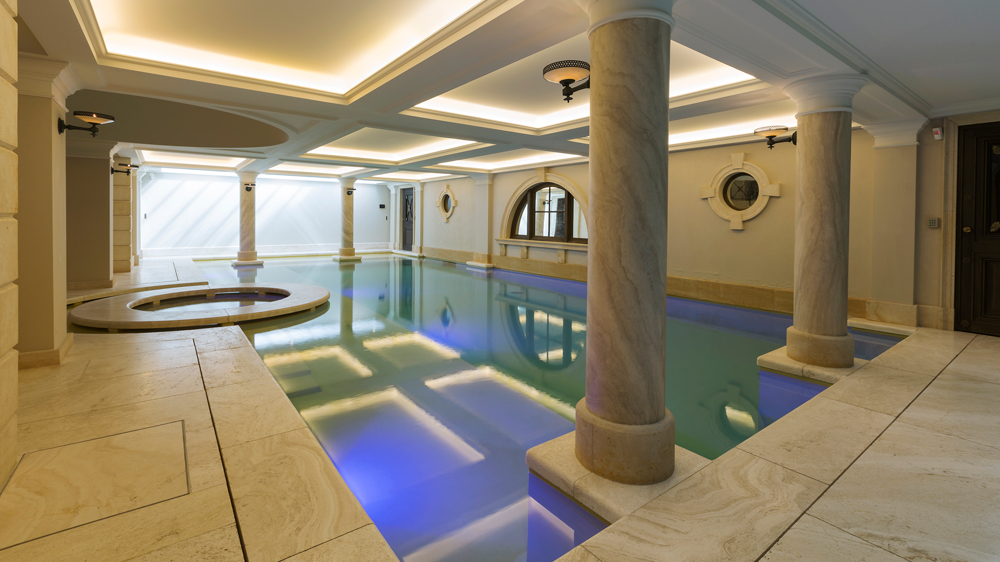 In Paris, the Old World often meets the new, igniting the City of Lights with a fresh take on history through its many distinct neighborhoods. It often adds up to homes with a uniquely sophisticated charm that melds the modern with the traditional.

One certainly gets a sense of all this while strolling up to the gated archway of this $23.5 million Parisian mansion on the sophisticated rue Crillon. The neoclassical façade was originally built in 1869 but underwent a $14 million renovation in 2013. Upon entering through the front doors, it is easy to see the juxtaposition of the modern baroque design with the exquisitely updated furnishings.

The five-story townhome, located within Paris’s Old Centre, is a dream for families and discerning hosts. With seven bedrooms (including a 650-square-foot master bedroom), multiple walk-in closets, an eat-in kitchen, a billiards room, a music-recording studio, a wine cellar, a massage room, and an indoor swimming pool, there is no limit to the entertainer’s imagination. Connected by heated parquet floors, the elegant interiors boast detailed wall moldings, spiral staircases, sophisticated wallpaper, lofty doorways, and gilded chandeliers suspended from above.

The eat-in kitchen in the townhouse on Rue Crillon, Paris.  Photo: Courtesy

With 16,000 square feet of living space, the estate easily accommodates an opulent lifestyle. On the second level, a library fit for an avid reader’s fantasy awaits; just like in a mystery novel, the touch of a book reveals the entrance to four spacious guest rooms with en suite bathrooms and a kitchenette. A 33-foot pool at the epicenter of the lowest level boasts large columns, a Jacuzzi, and an underwater tunnel connected to the pristine hammam. The basement level is also home to a car elevator—an automated system that maneuvers three cars on a platform for convenient parking.

The living space in the townhouse on Rue Crillon, Paris.  Photo: Courtesy

A greenhouse featuring a retractable roof is ideal for alfresco dining on sunlit mornings or taking a reprieve on the main-floor patio leading to the budding garden.

The caretaker’s quarters include a one-bedroom apartment and a two-bedroom duplex, which are accessed through the ornamented portico.

Lucky buyers will also have exposure to the neighborhood’s cafés and restaurants in the affluent district of Le Marais just beyond the gates. The glamorous estate marries urban life with historical roots in the illuminated city of Paris. The home is listed by David Stanley of Emil Garcin Properties.