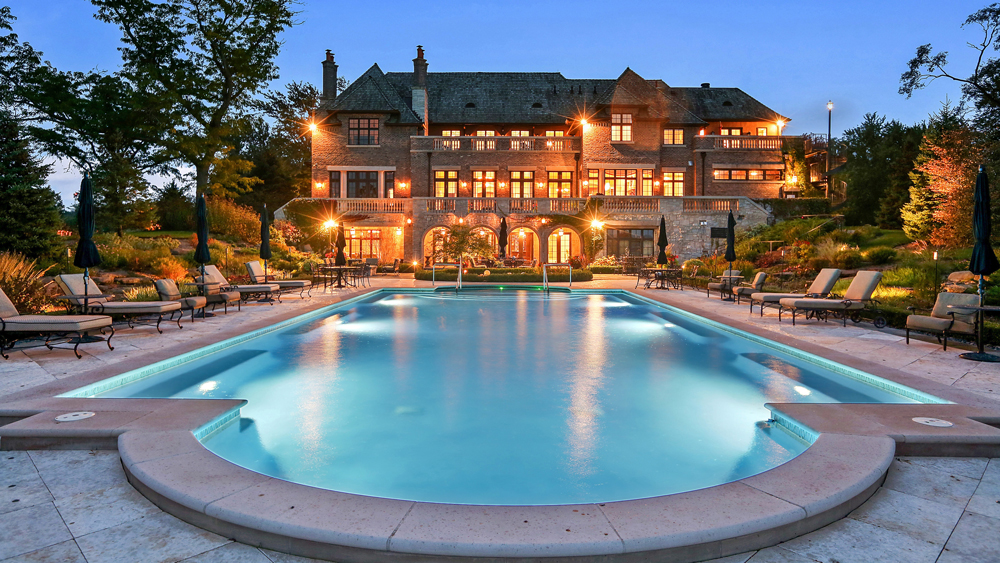 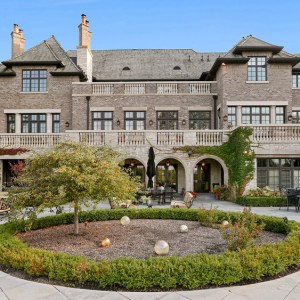 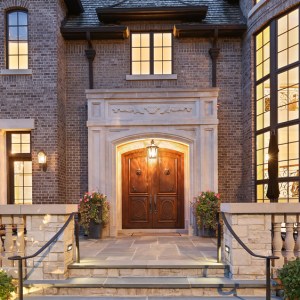 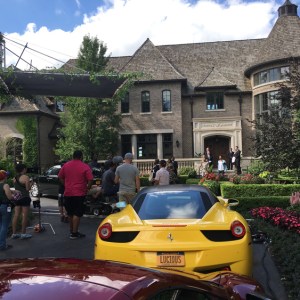 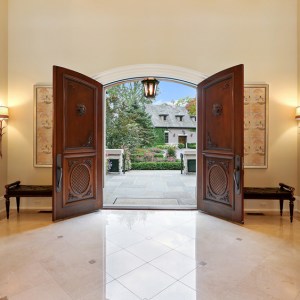 Empire, the Emmy-nominated television series and TV Program of the Year winner at the AFI Awards, is a musically driven show about the continuing rise and fall of a hip-hop mogul and his family. Featuring a heavy dose of power struggles and R&B anthems, the show stars Terrence Howard and Taraji P. Henson as the formidable leaders of the Lyon clan, who spend time in a luxe country estate.

Although the show is mostly set in New York City, the Lyons’ homestead is at 45 Lake View Lane in Barrington Hills, Illinois. A fitting home for the fictional family, it provides them with an escape from their lucrative record-label headquarters and makes many appearances throughout the show. In fact, the dramatic first episode of season four takes place almost entirely at the property, with a notable dinner scene showcasing the massive pool and romantically lit garden landscape.

Now on the market for $9.95 million, the lakeside home is located on an eight-acre plot in a prestigious neighborhood just 37 miles northwest of Chicago, an arguably affordable home in comparison to waterfront listings in other parts of the country such as Los Angeles and Miami. Although this abode is an hour from downtown Chi-Town, the extensive amenities and sweeping views of Keene Lake may sway city dwellers looking for space and proximity to the bustling metropolis.

A great room with an imported marble fireplace looks out to the connected limestone veranda occupying the entire back of the home. Ideal for lavish dinner parties, a formal dining room boasts a 26-light chandelier and a custom-built bar with frosted glass that changes colors to provide mood lighting for any occasion. An adjacent lounge, a family room with a fireplace, and a walnut-paneled library fit with two French doors lead out to the back terrace with views of the glistening lake. Dark hardwood floors pair with lightly colored nuHaus cabinetry in the kitchen, which also features granite countertops, refrigerated drawers, and Wolf appliances. A wine cellar, a game room with a pool table, and a state-of-the-art home theater also occupy the ground level of the home.

The second floor has four en suite bedrooms with walk-in closets and lounging areas with sweeping views of the lush backyard. Designed to protect against intruders and natural disasters, the master suite is made of masonry walls and hurricane glass and has a high-security door for maximum protection. Providing a grandeur fit for none other than hip-hop royalty, the suite features a sitting area with a fireplace, walk-in closets, and his-and-her bathrooms connected by a spa-inspired, spacious shower with rain and steam options.

The driveway, which takes you through a canopy of trees and manicured landscaping, opens to the home’s stately porte cochère and a four-car garage. A second two-car garage is ideal for water crafts, golf carts, and toys, while the separate kennel area gives pets the royal treatment with heated beds, an exercise area, and automatic water servers. Other rooms in the home include an artist’s studio, a craft room, a gym, and a second commercial-grade kitchen.

Outside, a half-mile private pathway around the land connects to the lakeside heated swimming pool with arching fountains and LED lights. A variety of gray stonework occupies the outdoor area around the pool, which is befit with a cabana for sunbathers, a fireplace, and plenty of space for alfresco dining or glamorous soirees—so you can party just like the rock stars.

Inside the $42 Million Beverly Hills Home of the MatchesFashion Founders