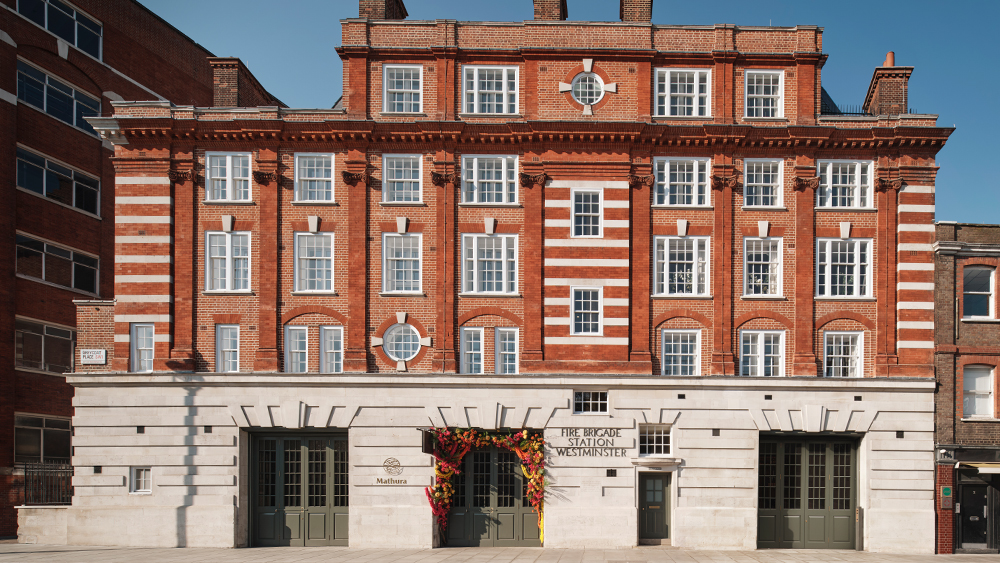 When it comes to luxury real estate, projects rooted in historic preservation can often be tricky. While authenticity is always essentially, stray too authentic and the result can feel like kitsch. But if the end result is not authentic enough, the project can lose its core historic appeal. Which is why London’s new Westminster Fire Station development feels like such a triumph.

Set in the heart of the British capital’s historic—and super-central—Victoria neighborhood, the recently launched 17-residence project gives new life to a retired Grade II fire station originally built back in 1906. With its imposing Baroque exterior, the original fire station sat at the heart of the Victoria community and was part of London’s storied firefighting history until it closed in 2014.  In 1921, for instance, the station saw the end of horse-drawn engines; in 1940, the station’s crew was part of the team that saved Westminster Abbey from near destruction during World War II; and in 1982, the landmark brigade (finally!) welcomed women into its ranks.

A newly-designed kitchen in the Fire Station development.  Studio Rochowski

Some 40 years later, the building is welcoming a very different type of newcomer—upmarket property buyers who favor both history and luxury.  “Discerning buyers, both domestic and international, who have an appreciation for beautiful design but also for sustainable living, will feel very at home here,” says Charlie Baxter, co-founder of Alchemi Group, which developed Westminster Fire Station.

The new project is split into two distinctive—yet wholly integrated—wings accessed by a central lobby and connected by an elegantly landscaped communal courtyard. The first, known as the “Fire Station” is a sensitive restoration of the original building featuring six apartments, while the second—the “Station House”—is an entirely new-build addition with 11 more residences designed by London-based Openstudio Architects. While the former is fronted by classic Edwardian Portland stone, the new Station House’s exteriors feature rows of custom-made iridescent glazed bricks—a thoroughly 22nd-century interpretation of the Fire Station’s original eye-catching aesthetic.

“We wanted to create characterful, eclectic and stylish homes that befit the charm of the original building,” says Baxter. “But it was also hugely important to us to create a new building—the new Station House—that sits in complete harmony with the original Fire Station. Very clever design and the sourcing of rare materials marry the old and the new.”

The project launches now with its first residence, a two-bedroom unit that has recently come to market. The home—which includes two bathrooms as well as a pair of living rooms—is set in the original Fire Station on the first floor and spans just under 1,500 square feet. Oak-plank and parquet floors set a cool tone for the living and sleeping quarters, while the baths come tiled in either ceramic or Calacatta Viola marble. Additional bathroom fittings range from antique gold consoles and taps to vintage gold towel warmers—along with ceramic pedestal basins and classic back-to-wall toilets. Siemens appliances—including a washer, dryer and dishwasher—also complete the project’s high-end amenities package.

Baxter says the apartment was “inspired by a ‘Farmhouse in the City’ aesthetic; interior designers Studio L, London sourced a lot of vintage pieces and antiques, even family heirlooms, to create a home that feels ‘collected over time’. Sourcing locally and upcycling have been key parts of the design approach and our wider sustainability goals for the overall development.”

One of the home’s two bedroom  Studio Rochowski

Indeed, the entire project is rooted in sustainability. The original Fire Station, for instance, was renovated in ways to maximize energy efficiency to reduce heat loss in winter and stimulate cooling in winter. Meanwhile, the project’s wooden floors are FSC and PEFC certified, with three new trees planted for each tree harvested. The project also includes technologies that reduce water usage as well as a “green” rooftop garden to both help stimulate local biodiversity as well as improve the immediate environment. “Reducing our impact on the environment lies at the very core of this project,” Baxter notes. “We have managed to create homes that produce less than two tons of carbon, against an average for this apartment size of more than four tons.”

The old engine room will be home to a restaurant, Mathura, from Michelin-starred chef Atul Kochhar, and the original carriage doors will serve as the main entrance to the building. “Victoria has gone through a dramatic evolution over the past few years and now offers some of the best restaurants, bars, shops and green spaces in London,” Baxter says. “It’s an exciting time to buy in this area.”

Click here to see all the photos of the Westminster Fire Station Apartment.