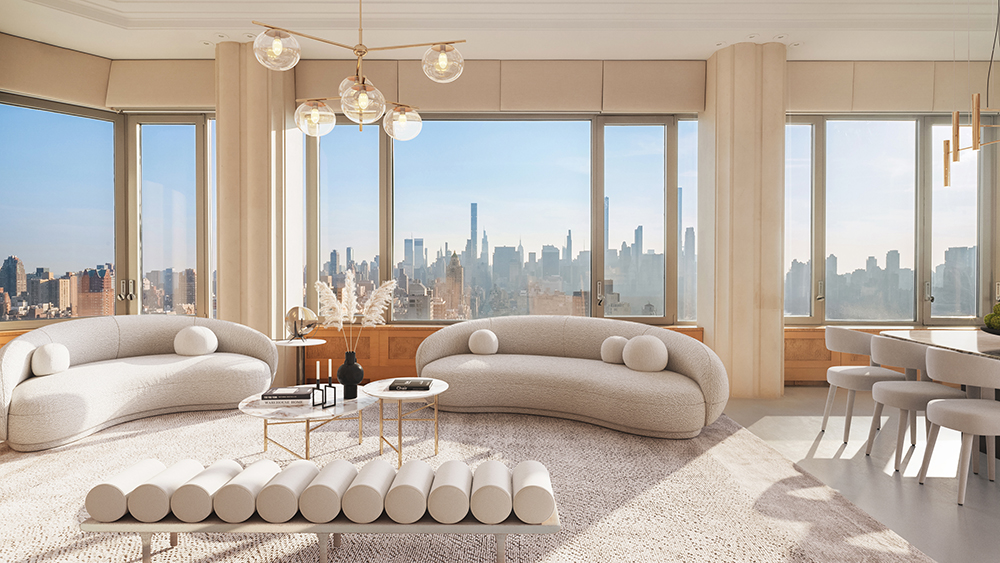 When a property comes to market from the private portfolio of a billionaire real estate developer, you know it’s going to be good. That’s certainly true of Robert Toll’s New York City penthouse that has just been listed for $22 million.

The glitzy triplex, which is located a stone’s throw from Central Park on Manhattan’s Upper East Side, offers panoramic views of the city, an inordinate amount of space and a full suite of luxury amenities. Indeed, there’s no mistaking this is the home of a magnate estimated to be worth $1.1 billion.

Toll, who co-founded Toll Brothers real estate with his brother Bruce in the late ‘60s, has actually lived in the building at 30 East 85th Street with his wife, Jane, for more than 30 years. The couple started out on the 20th floor in a comparatively modest apartment that they resided in for around a decade. Chasing the views, the Tolls purchased the penthouse in ‘98 and embarked on a one-year renovation before moving in on New Year’s Eve in ‘99. Naturally, they celebrated with a party.

The primary suite covers about a third of the 30th floor.  Serhant/Krisztina Crane of Evan Joseph Studios

That’s not the only entertaining the couple has done at the lavish abode, either. The prolific philanthropists hosted dozens of political events and fundraisers with high-profile guests including then-political newcomer Barack Obama. It’s easy to see why it was chosen for such soirées, too.

Spanning some 5,180 square feet, the five-bedroom, five-and-a-half bath residence covers the entire 29th, 30th and 31st floors. It features ornate wood paneling throughout, along with large casement-style windows and no less than four private terraces offering prime vistas in every direction.

The lower level comprises an in-law suite with a living room, walk-in closet, full bath and balcony. The middle level, which is the main living area, features a giant great room with 12-foot ceilings and a working fireplace. The upper level, meanwhile, comes fitted with two generous bedrooms. The standout is, of course, the primary suite which has the majority of the floor, a huge bathroom and top-notch northern views.

The listing is held by Tamir Shemesh of Serhant. This real estate firm, which was founded by Ryan Serhant of Bravo’s Million Dollar Listing New York, handles an array of top-tier properties throughout the Big Apple.

“This is a stunning penthouse spanning three floors, two of which are floor-through, offering breathtaking 360-degree views including the city skyline, Central Park, and all the way up to the George Washington Bridge,” Shemesh told Robb Report via email. “Anyone would be fortunate to call this expansive residence their home.”

No doubt Toll will get a good deal, too.