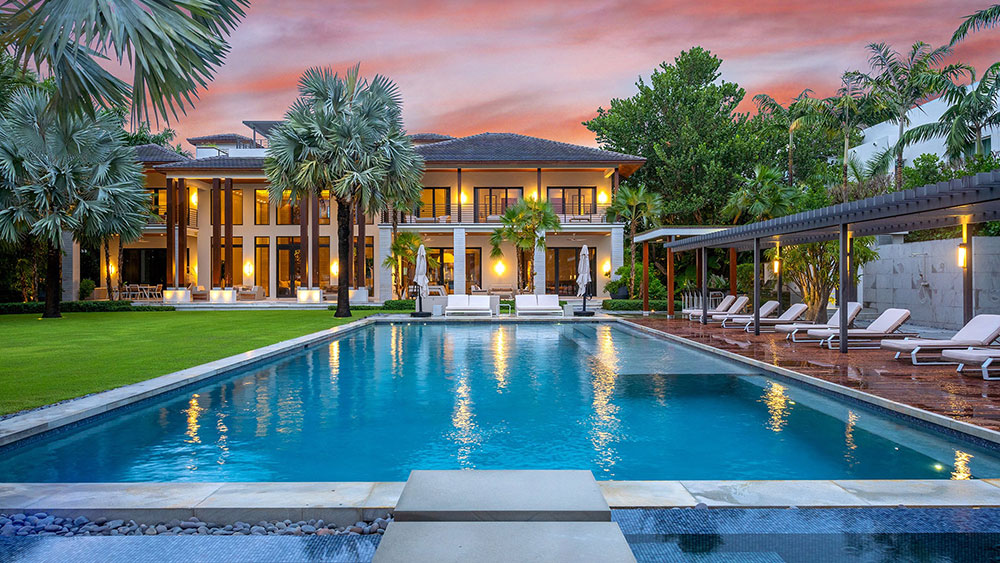 So will it be beach, or bay? Billionaire Rockstar Energy Drink creator, Russ Weiner, is offering buyers a choice by listing his two sprawling South Florida waterfront mansions, each with a roughly $35 million asking price.

Weiner, 49, worth an estimated $4 billion according to Forbes, has just listed the two homes, one on 225 feet of sandy beach in Delray, the other with space for a 150-foot superyacht on Biscayne Bay in Miami.

The enthusiastic real estate dabbler reportedly paid $20 million for the Miami Beach compound on North Bay Road back in 2016. The two-story, Balinese-inspired house covers more than10,000 square feet and comes with six bedrooms, eight and a half baths, and boasts towering 30-foot ceilings.

But it’s the outdoor amenities that define this lush, waterfront estate set on a 48,000-square-foot lot. Among its fun-in-the-sun features, there’s a rooftop terrace, a dock for a 150-foot superyacht, an XXL-sized 25,000-pound boat lift and four jet-ski lifts. 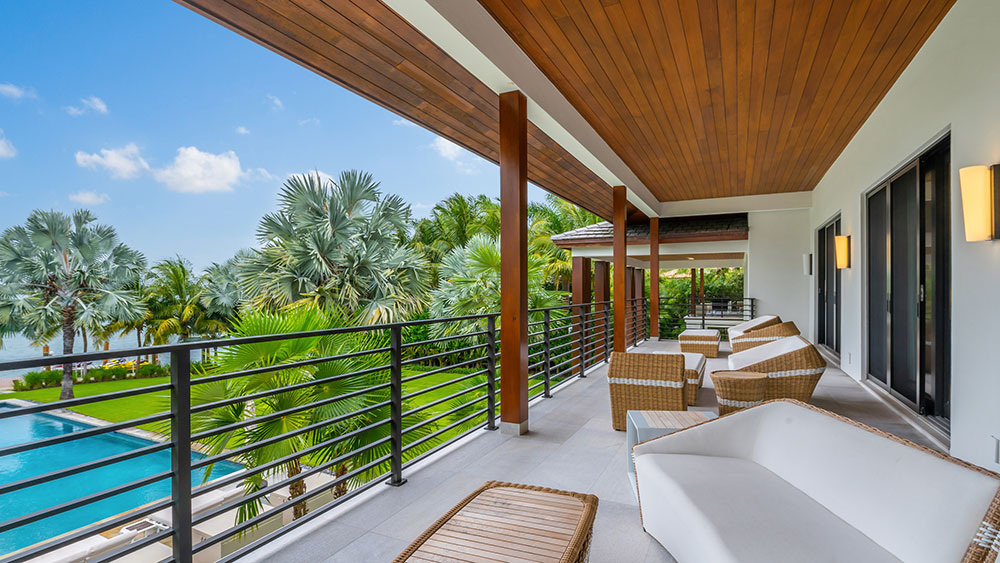 The terrace.  Courtesy of Lux Hunters for Douglas Elliman

“This exquisite property offers not only a home, but also a complete coastal dream lifestyle. It truly is an oasis of serenity, luxury and unwavering attention to detail,” says Brett Harris, listing agent with Douglas Elliman. 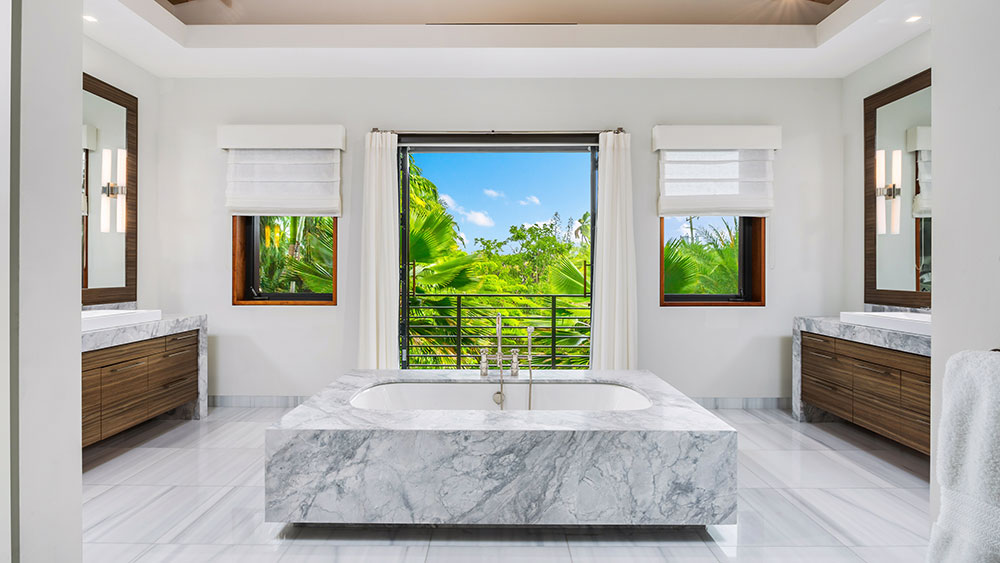 Even the tub has a great view.  Courtesy of Lux Hunters for Douglas Elliman

An hour’s drive north to Delray Beach finds the six-bedroom oceanfront estate Weiner bought for $11.6 million in 2009. According to Candace Friis, the listing agent with the Corcoran Group, the home’s biggest appeal is its 225 feet of beachfront on the Atlantic.

“It’s rare to find a property with this much prime oceanfront and to be within walking distance of all that Delray’s Atlantic Avenue has to offer. It truly is an exceptional property,” she explains. 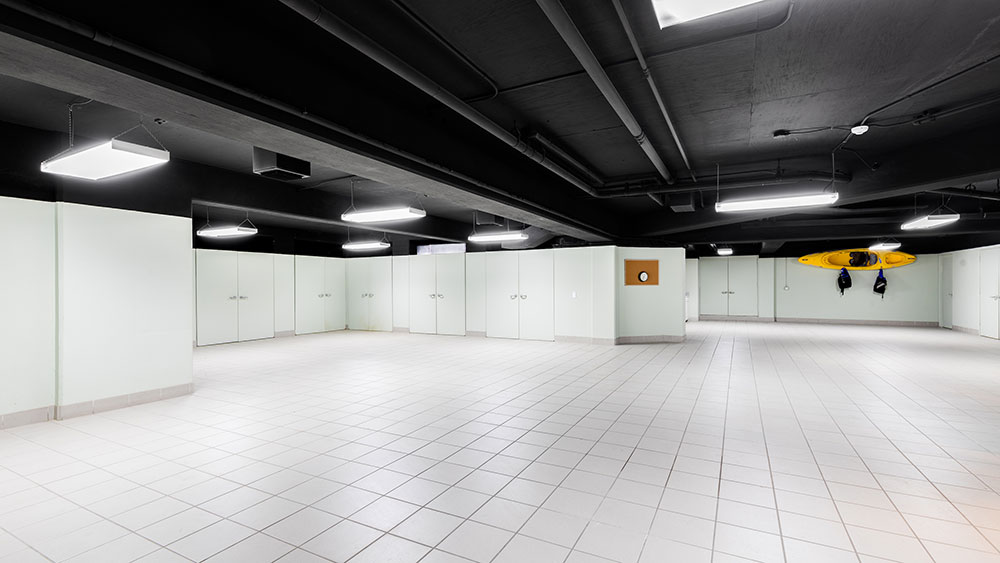 The 12-car garage in the Delray Beach home.  Courtesy of Daniel Petroni for Corcoran Group

Built in 1998, the 21,000-square-foot contemporary Florida home occupies a double lot on Delray Beach’s South Ocean Boulevard. Set well back from the beach—a winding path leads to the sand—the estate features an air conditioned 12-car garage, a large pool and spa, and its own tennis court. 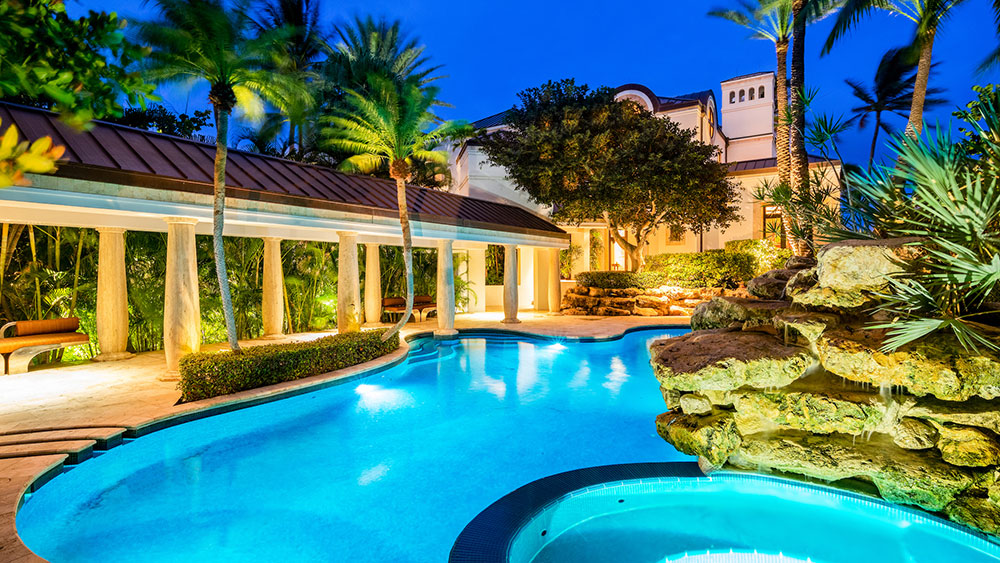 The pool at the Delray estate.  Courtesy of Daniel Petroni for Corcoran Group

Interestingly, Weiner originally listed the estate for $35 million, but after news broke of the listing, he raised the asking to an even more ambitious $36.5 million.

Since he began speculating in real estate, the energy drink mogul has acquired something of a reputation for price changing. 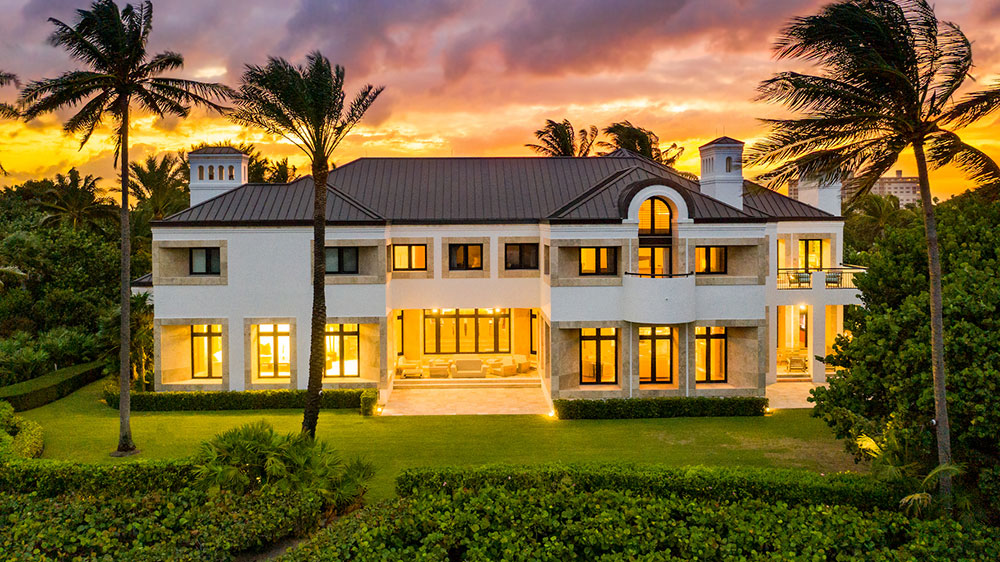 In 2017, he listed his renovated Beverly Hills mansion for $45 million, quickly dropping the price to around $36 million, then took it off the market. In August he reportedly splashed $16.5 million on an 11,570-square-foot, three-story mansion in LA’s ritzy birds streets area in Hollywood Hills West, only to re-list it two weeks later for a whopping $28 million. 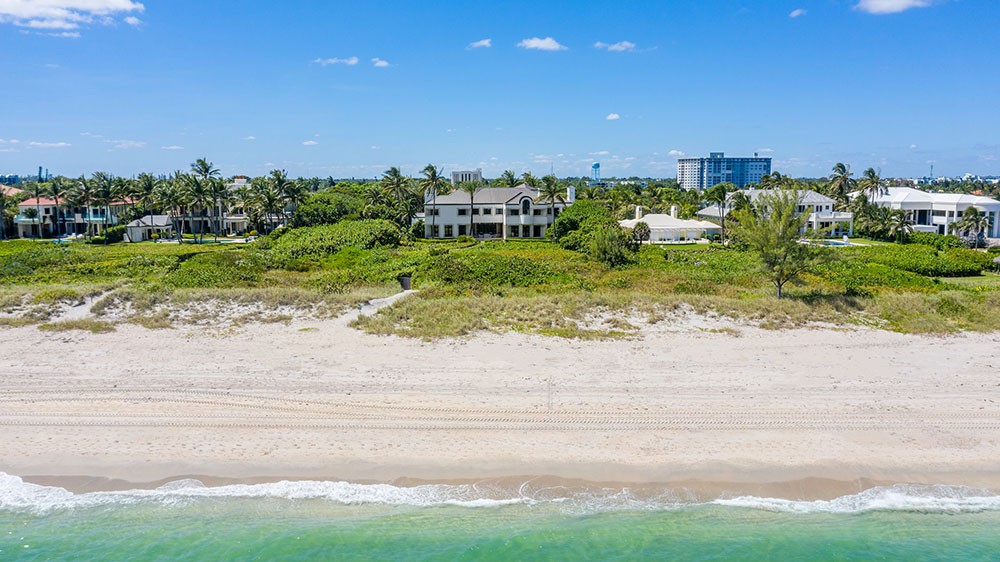 Also within his property portfolio currently with “for sale” signs outside; an Hermosa Beach house in Southern California listed for $21 million, and singer Madonna’s former French-inspired Beverly Hills compound, yours for $35 million. 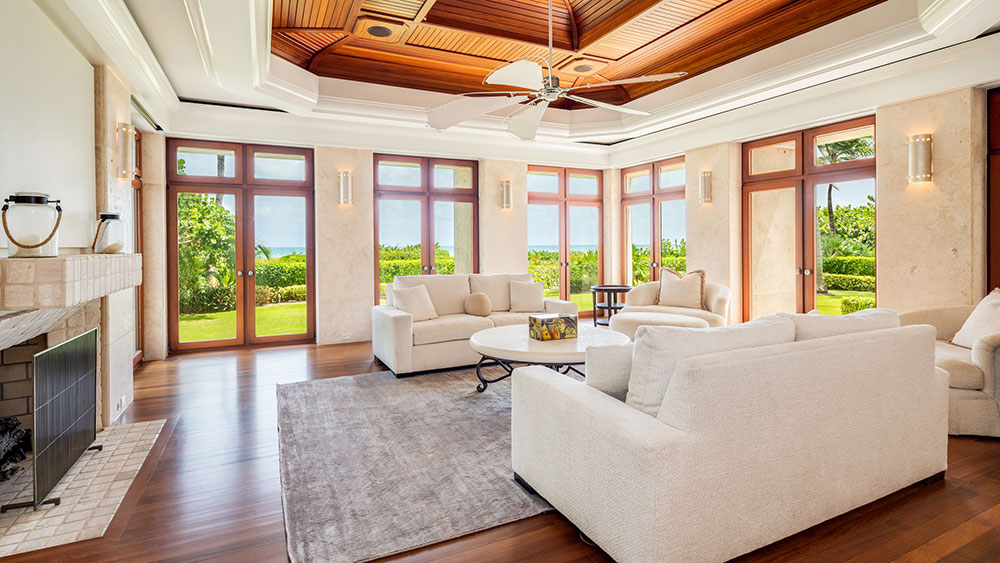 The living area.  Courtesy of Daniel Petroni for Corcoran Group

The son of right-wing talk-radio star Michael Savage, Weiner hit fame and fortune back in 2001, at age 31, when he created Rockstar using a $50,000 mortgage on his Sausalito, Calif. condo. 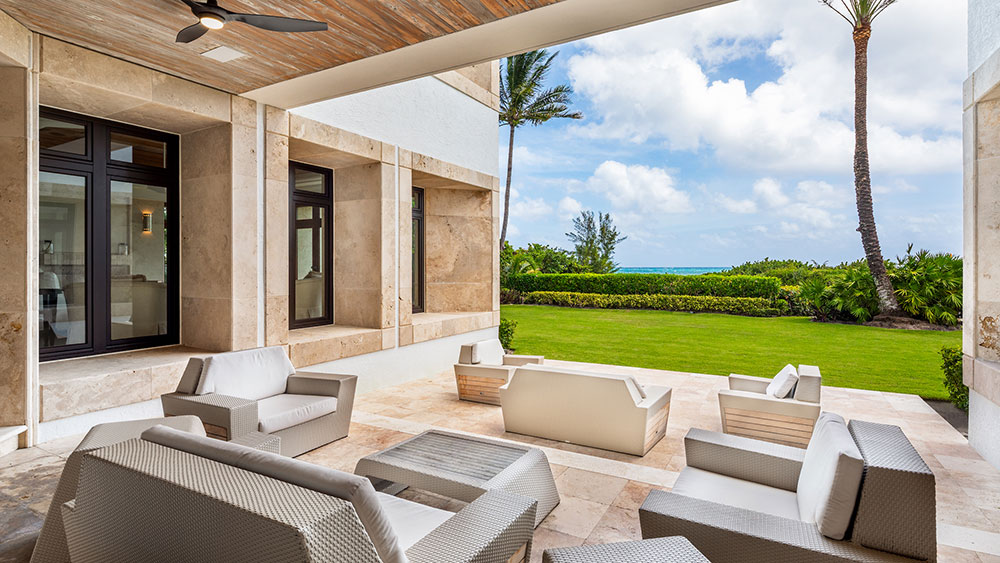 It’s all about outdoor living.  Courtesy of Daniel Petroni for Corcoran Group

If he sells his two South Florida homes, we’ll certainly drink to his success. A can of Rockstar, naturally.

Home of the Week: This Soaring $32 Million Bahamian Mansion Comes With a Porsche and a Range Rover

Home Tours: This $38 Million SoCal Mansion Has a 55-Foot Pool That Will Rival Any Resort’s