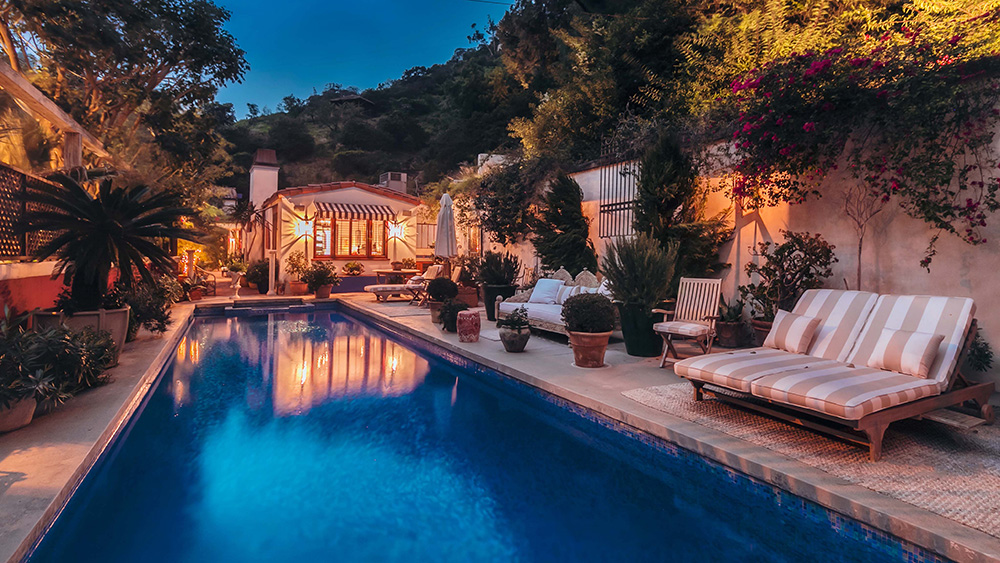 When a house has its own name, you just know it’s going to be alluring in some way. Back in the Roaring Twenties at the height of Rudolph Valentino’s success, the swashbuckling heartthrob snapped up a four-acre estate, high in the hills above LA’s Benedict Canyon. He named it Falcon Lair after The Hooded Falcon, the movie he was working on.

Valentino filled the main house with antiques and souvenirs from his travels, and housed his four Arabian horses and collection of stunning automobiles in the estate’s stables and garages. His dinner parties were the talk of Hollywood.

Alas, the star of The Sheik and The Four Horsemen of the Apocalypse didn’t get to enjoy his new lair for long; the so-called Latin Lover died of complications from gastric ulcers in 1926. He was just 31.

After his death, the estate was sold off to cover the actor’s debts and much of the land was parceled off. After a succession of different owners, the 1924 Spanish Colonial Revival-style house was bought by tobacco billionaire Doris Duke in 1953. She lived there until her death in 1993 at age 80.

Tragically, the historic main house was bulldozed in 2005. Today, all that remains of the fabled Falcon Lair is Valentino’s former stable building and three-bay garage, which were converted by Duke in the ’70s into a 2,884-square-foot, three-bedroom guesthouse and pool pavilion.

Situated on a lush 1.3-acre lot on winding Cielo Drive, a stone’s throw from the Beverly Hills Hotel below, the house that’s referred to as Falcon Lodge is now being listed for $4.95 million by Davide Giardino of Rodeo Realty.

According to Giardino, the current owner has lovingly restored and remodeled the home to keep the understated Old Hollywood charm it had in Valentino’s day, with lovely antique mantels, chandeliers, sconces and claw-foot bathtubs.

The property also retains the sense of peace and privacy that Valentino craved. The high concrete wall the actor built to protect the property from prying eyes still shields the home and its 50-foot saltwater swimming pool and spa.

Of course, if you have an additional $29.5 million burning a hole in your chinos and you’re looking for the full Valentino lifestyle experience, you can buy the surrounding four-acre property that includes much of the land used for Valentino’s original Falcon Lair compound.

Jeffrey Hyland of Hilton & Hyland has the listing for the 1436 Bella Drive site, which has already been approved for a 30,000-square-foot Mediterranean-style mansion offering a panoramic view of Beverly Hills.

In true Valentino style, maybe the property will go to a ”silent” auction.