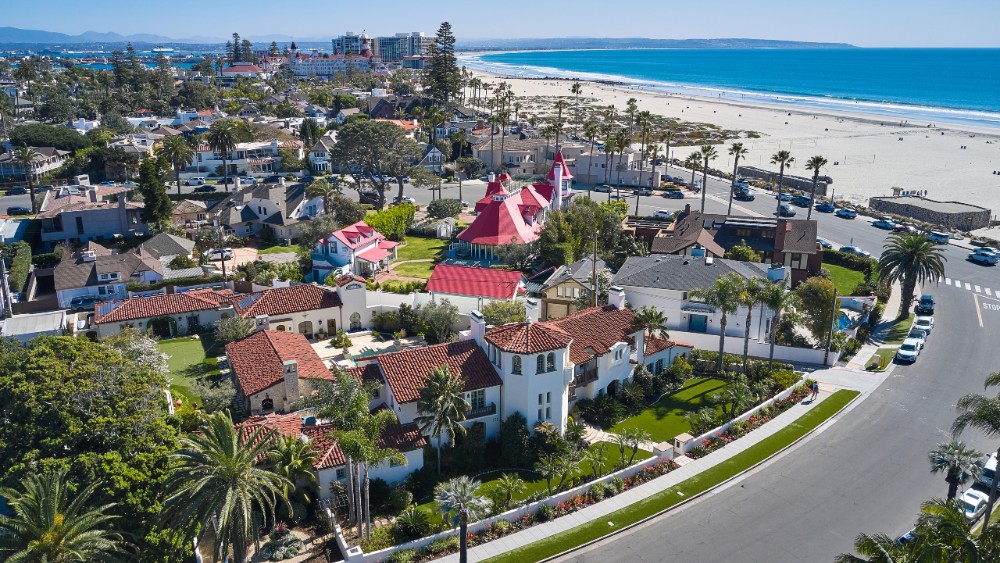 If the walls of the Coronado Castle could talk, they’d likely share tales of extravagant dinner parties, high-profile events and late-night piano serenades. For examples, it’s said that American pianist Liberace was one of the famous faces to pass through the Castle, and stories circulate about him playing the keys for guests.

“There are probably many more stories not many people know about unless you were there,” says co-listing agent Chris Clements of Compass, noting that the property has also been the setting for countless weddings, fundraisers and events over the years.

The home was first built in 1925 and sits just 100 feet from the beach.  Michael Andrew Photography

Constructed by renowned architect Richard Requa for business magnate W.A. Gunn in 1925, the Coronado Castle is a San Diego landmark thanks to its Spanish Mediterranean-style design and Old Hollywood glamour. It’s also known for its size, as the property is four times bigger than the average lot size in Coronado. Many acknowledge the home to be Requa’s best work and a great example of his mission to preserve San Diego’s Spanish heritage. It was historically designated in 1982 and is protected under the Mills Act, which means significantly lower property taxes for owners in exchange for the continued preservation of the building’s architectural integrity.

That’s not to say the property hasn’t been extensively renovated, or added onto, since its inception. The most recent owner and current seller is Funko CEO Brian Mariotti. He and his wife, Shannon, were responsible for an extensive renovation of the 14,142-square-foot main house that took place between 2017 and 2020. They added a family room, pushed out the dining room and added custom glass doors. Even the windows were scraped and hand painted and ceiling beams were added.

Renovations took place between 2017 and 2020 and included the addition of a new guest house.  Michael Andrew Photography

The couple also purchased the neighboring lot and merged the two to create an even larger property. “Lots in Coronado are very tight,” Clements says. “The current owners had a unique opportunity to buy the property next door, which increased the lot size significantly. It also makes for a special opportunity being 100 feet away from the beach but also having such a large yard and so much privacy.”

The sellers enlisted Kim Grant, an architect and historic preservation specialist, to help with the renovation. A large part of this project included merging the garage and one-bedroom guest home to create a larger guest house, and building a separate new four-car garage. Another significant undertaking was creating a 7,000-square-foot basement while retaining the architectural integrity of the home.

In a documentary-style video about the property, Grant says the team “held up the masonry structure, dug underneath and excavated out the entire backyard, which required enormous feats of engineering.”

Accessed via a grand staircase, the basement features a 26-seat movie theater flanked by life-size Star Wars memorabilia; golf simulator; media room; bar; and trophy room. For wellness buffs, there’s a 1,300-square-foot gym that rivals the best out there, complete with a full spa, sauna, massage table and ice bath to recover after workouts.

The current owners built a 7,000-square-foot basement that includes a movie theater with seating for 26.  John Leonffu

Some of these materials, simply due to age, had to be replaced, and Grant worked tirelessly to replicate exactly what Requa had done with ornate, historically accurate finishes and design. She sourced one-hundred-year-old terracotta flooring, Moorish tiles from Mexico for the staircase and 250-year-old stonework around the pool. The result is a lived-in look that doesn’t take away from the other decorative elements.

“The goal was to update the home and add their touch to it, but they didn’t modify the structure because it’s a dramatic and beautiful classic that is well known in all of San Diego, not  just Coronado,” Clements says. “The size of the property, the height of the walls around the backyard and the way the home is oriented are things you’d never be able to do again today.”

The main home and guest house encircle the inner courtyard, which includes the pool, Moorish gardens and an estancia with an outdoor kitchen and fireside dining area. The lush gardens are sprinkled with 100-year-old olive trees, three fountains, a dog run and a putting green. In total, there are four bedrooms, six bathrooms, and three half-bathrooms with perfect views of the ocean. Modern luxuries aren’t forgotten, either: There’s a brand-new kitchen with state-of-the-art appliances from Miele and SubZero, as well as an 80-inch La Cornue range.

The estate, located at 1127 F Avenue, is listed for $39 million and, if sold near the asking price, will most likely break the record of the most expensive home ever sold in Coronado. Almost more than 100 years after it was first built, the home is ready for a new ownership era and the next iteration of the Roaring Twenties.

The backyard is like a private sanctuary.  Michael Andrew Photography

The home is recognizable by its third floor turret.  Michael Andrew Photography