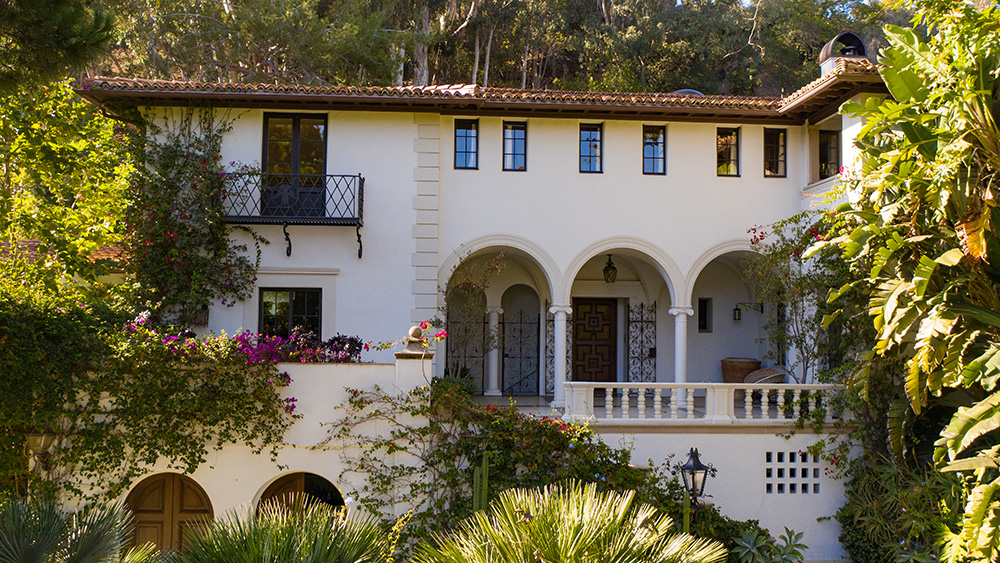 Jacob Burghart for the Agency

Looking to trade in your big-city condo for something a bit more storied and spacious? There’s no time like the present: A sprawling, 14,000-square-foot property on a 3.35-acre lot has just listed for $50 million in Santa Monica, an LA community not known for having many tracts of land this vast.The estate, which includes one main residence, two guest houses and outdoor amenities aplenty, is being sold by Shane Smith, the co-founder and executive chairman of Vice Media. The Mediterranean compound was previously home to director Henry Jaglom and writer Victoria Foyt—Smith purchased the digs without ever seeing them in person for $23 million.

Still, $23 million to $50 million is quite the flip. Most of that uptick has to do with the property’s subsequent restoration. The place was originally built in 1932—Smith brought on interior designer Kerry Joyce to rejuvenate its period details.

The family room, with custom bookcases by MJ Atelier and antique wooden beams.  Cris Nolasco for the Agency

The results speak for themselves. The first floor of the main residence features many notable design moments, including a ceiling with antique wooden beams in the family room, a kitchen with bright, hexagonal floor tiles from Clé and glass chandeliers from Venice throughout. There’s more to it than meets the eye, too: Behind the bookshelf in the library there’s a hidden, speakeasy-style bar made by MJ Atelier, with a spiral staircase that leads to a discreet wine cellar designed by Studio Shamshiri. Makes sense for a vice guy.

There are eight bedrooms in the main residence, as well as two in each of the guest houses. One of these separate buildings even has its own catering kitchen and meeting rooms, the other more closely resembles a cottage, and is a bit farther flung, offering more privacy.

The kitchen, which is equipped with Wolf appliances.  Jacob Burghart for the Agency

Outside, there’s a 74-foot pool and adjacent pool house, which includes a wood-burning pizza oven, a grill and a bar. If you’re more of a sporty sort, though, there’s also a bocce court on the property, plus a separate children’s play area. The extensive gardens include orange, lemon, lime and avocado trees—there’s a cedar soaking tub here for relaxing al fresco.

Smith and his family have lived at the estate for about five years, but if it looks familiar to you, there’s a reason or that. It was the home of smuggler Victor Maitland in the 1984 Eddie Murphy action comedy Beverly Hills Cop—a dramatic shootout at the property results in Maitland’s death at the end of the film.

Of course, the home’s meant to be more of a resort, so the future owner will likely use it as a private, open-air oasis rather than an action-movie backdrop. Santiaga Arana from the Agency holds the exclusive listing.

The lounge.  Jacob Burghart for the Agency

The 74-foot pool.  Jacob Burghart for the Agency

The outdoor bath.  Jacob Burghart for the Agency