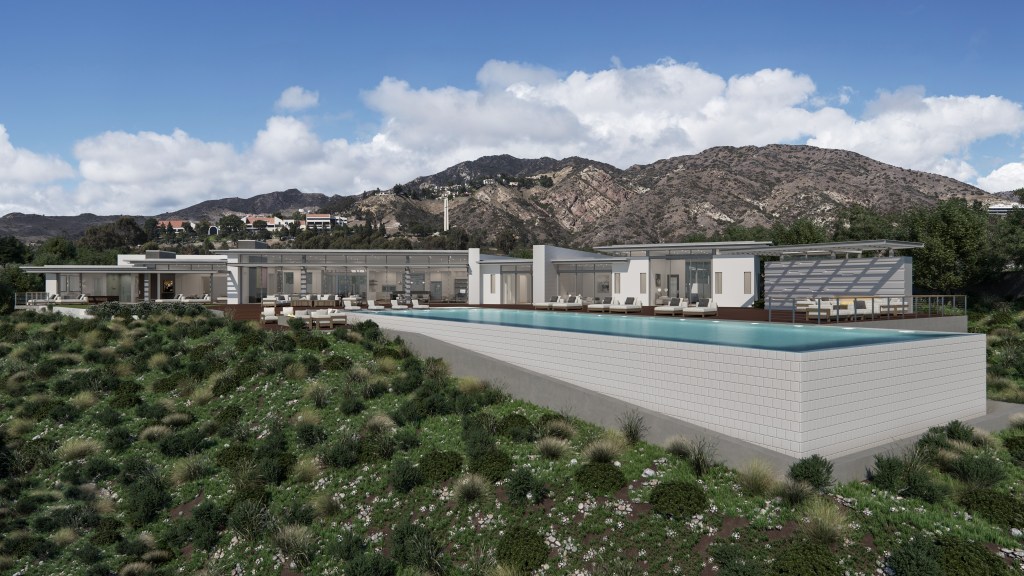 The backyard area of “House 3”

For Scott Gillen, good things come in threes, apparently. The developer’s latest project—a 24-acre, five-home enclave dubbed the Case—is one of Malibu’s three gated communities, and it’s situated on one of the area’s three bluffs, which just so happens to be a three-minute drive from the vistas of Malibu Creek.

“It’s a very special project,” Gillen told Robb Report in a recent interview. Indeed, the developer’s belief in the venture was clear the moment he acquired the land for it: In 2017, Gillen and his firm Unvarnished made headlines when they spent over $50 million to buy the 24-acre parcel, the the highest amount ever paid in LA history. A hefty investment, to be sure, but one that seems to be paying off, as one of the Case’s homes is already in escrow for approximately $40 million. The others are still available (for now). The remaining homes will range in price from $55 to $60 million, with the most expensive property closing in on the $100 million mark.

Each of the Case’s homes sits at about 11,000 square feet and is designed with Gillen’s signature open-space layout—albeit with more of a mid-century modern flair this time around. Exotic woods and aluminum panel work abound. Pools are also a prerequisite—every home has one that’s a minimum of 100 feet long (the largest is 152 feet). And, as is fitting of a locale that, according to Gillen, “encompasses Malibu and the lifestyle,” each property is south-facing, so homeowners can see the sunrise and the sunset from the bluffs.

The exterior of “House 4”  Photo: Courtesy of Unvarnished

But while the frills are certainly spectacular, security takes priority at the Case—namely, security from California’s increasingly aggressive wildfires. For Gillen, memories of the 2018 blazes that engulfed the area are not only fresh, they ultimately changed his approach to the homes. “I don’t think anyone thought the fires were going to come this far,” he says. “After, we thought, ‘How could we make this even better than what the code requires?’ We expanded upon it.”

The development already had a built-in (not to mention aesthetically pleasing) fire deterrent in its surrounding solid concrete walls. But now, it just has a little more firepower—or, in this case, waterpower: Behind the walls, water cannons will now circle each house. In addition, in the case of emergency, every homeowner can contact a private firefighter service, which will have access to the property’s three private fire hydrants and a massive water tank.

The firepit at “House 5”  Photo: Courtesy of Unvarnished

And fires aren’t the only thing the Case can quell. The homes’ eight-inch-thick concrete walls will keep out most intruders and unwanted guests. Beyond that, Unvarnished also enlisted the help of security expert Gavin de Becker to create a high-tech, state-of-the-art security system. If that name sounds familiar, it’s because de Becker is Jeff Bezos’s security chief, and the primary investigator behind the Amazon CEO’s much-publicized divorce. As for the details behind the Case’s security system, Gillen neglected to disclose the nitty gritty: “I don’t want to get into the type of security. But I promise you it’s very tight.”

As a bonus, you won’t have to worry about interior design: The Case homes come fully furnished. Gillen selected all the furniture himself—from the couches to the carpets. So far, the developer says the reaction has been positive. “When I ask people what they like about my work, they just say, ‘I’m not sure, it just feels good,'” he says. “For me, that’s a home run.” If he can sell all five units, we’ll go so far as to say it’s a grand slam.

See more photos of the Case below:

The library at “House 3”  Photo: Courtesy of Unvarnished

The great room at “House 4”  Photo: Courtesy of Unvarnished

The great room in “House 3”  Photo: Courtesy of Unvarnished

The great room at “House 5”  Photo: Courtesy of Unvarnished