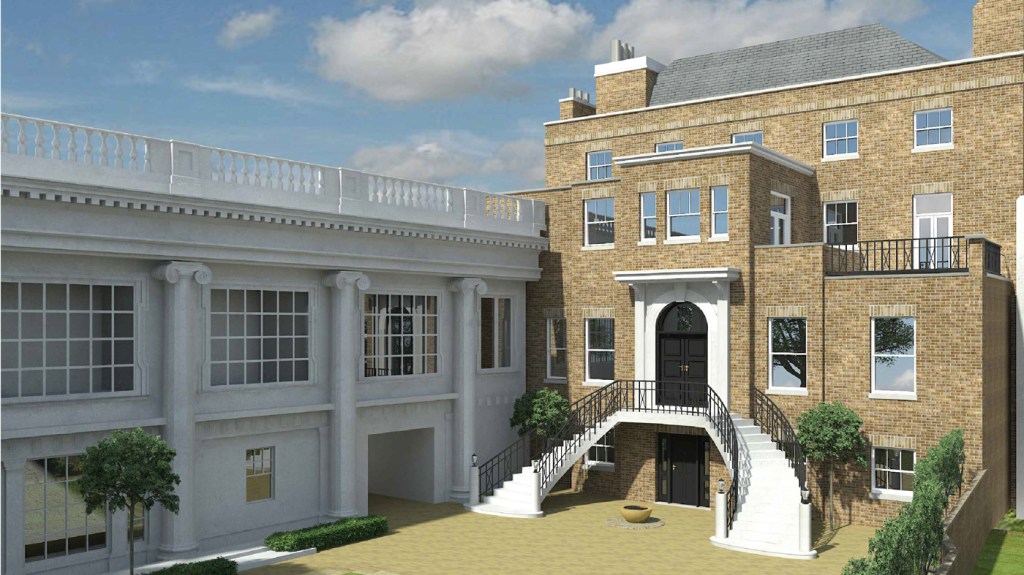 Built in 1769 for Sir William Richardson, the three-story Doughty House in London is set on an acre of landscaped gardens overlooking the River Thames. Richmond-based developer K10 Group is now transforming the Grade II–listed manor house, gallery house, and Dower House into an ultra-modern, 10-bedroom estate. At 38,000 square feet, the home’s size will rival the garden wing of Buckingham Palace—and its interiors will be equally palatial.

The renovated main house will feature eight bedrooms and an entrance hall with a grand staircase, formal dining room, music room, drawing room, library, and cinema. The basement will showcase a bowling alley and a garage with room for seven cars, complete with a car lift and turntable. State-of-the-art amenities include a winter garden room that can house up to 200 guests, a cocktail bar, wine storage, and a swimming pool surrounded by spa and sauna rooms.

The Dower House will be converted into a two-bedroom guest house with a kitchen and pavilion. Outside, the main lawn will showcase a reflection pool. Below the property, an underground car museum accessible by a car lift will pay homage to the Cook family, former owners who had one of the first Rolls-Royce motorcars in the country.

More than 9,000 reclaimed bricks, 48 chandeliers, 12 grand fireplaces, and 20 different types of marble and stone will be used for the project, along with Roman-era flooring.

The project—which is currently the most expensive restoration being planned for a private house in London—is on track to be completed in late 2019. It is currently listed for $135 million.