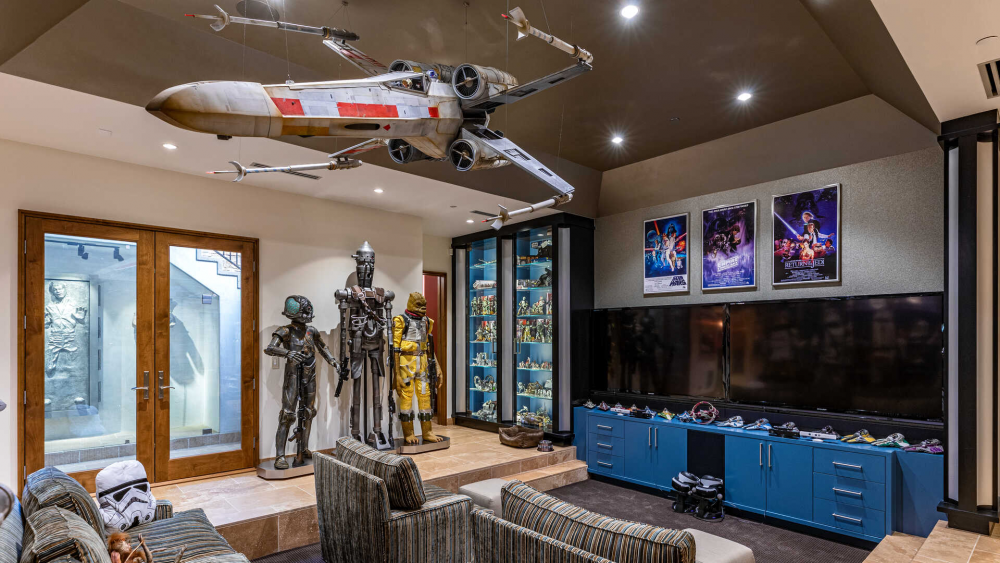 When it comes to making your own Star Wars museum, in the wise words of Yoda, “Do or do not. There is no try.”

That’s the mantra of this Hidden Hills home’s owner, anyway. A Craftsman-style six-bed, 11-bath, the California mansion, which is on the market for $26.5 million, also happens to house an incredible collection of Star Wars memorabilia.

Tucked away in a 5,000-square-foot basement—you wouldn’t know it was there unless someone told you, given the home’s other more traditional aesthetic elements—the downstairs museum is a sprawling tribute to all things George Lucas. At the bar, for instance, is a re-creation of the patrons and musicians at Chalmun’s Cantina à la Episode IV—though by the looks of it they’re serving up Clase Azul instead of Jawa Juice. The trio are three of the 40 life-sized characters that call the space home, from Episode V bounty hunters to Darth Maul himself.

The home’s unassuming exterior belies the sci-fi universe inside.  The Agency

A model X-wing fighter hangs from the ceiling—which is about a sixth of the size of the ones used in the movies—an entire array of Stormtrooper helmets sit in glass cases and hundreds of collectible action figures fill up walls upon walls upon walls. None of these are original props from the film, however, as the owner preferred commissions for their more museum-quality finishes, The Wall Street Journal reports. Regardless, the collection is estimated to be worth millions in its entirety. Most items are available for purchase, but their individual prices are not included in the home’s $26.5 million asking.

Stormtrooper helmets and other commissioned pieces fill the space.  The Agency

And it doesn’t stop there. A movie theater sits just off the main basement, and C-3PO and R2-D2 will greet you as you make your way to your seat. Inside, the influence of a galaxy far, far away remains evident: Tiles lining the walls are modeled after the Death Star’s rugged surface, and the ceiling is reminiscent of a TIE fighter’s view of the galaxy. Figures of Boba Fett, a (frozen) Han Solo and Chewbacca hang in the back.

It’s a lot of real estate dedicated to one obsession, but the rest of the 18,200-square-foot digs don’t disappoint. A large outdoor pool, complete with its own waterfall and slide, flows into a grotto slash spa within the home; a tennis court and a loggia are adjacent. Inside the mansion, there’s a fully equipped gym, a safe room and even a 750-gallon aquarium.

Hundreds of action figures line the walls.  The Agency

Also on the three-acre property is an observatory—allegedly the only one in Hidden Hills—for days when the theater’s LED-starred ceiling just isn’t cutting it. Plus, there’s a custom music studio with insulated walls in the basement. Its previous owner’s impressive guitar collection is currently on display.

In other words, if you’re a Star Wars fan, these are the droids you’re looking for. If not, well, we find your lack of faith disturbing.

The movie theater.  The Agency

The main entrance.  The Agency

The living room.  The Agency

The pool, waterfall and loggia.  The Agency

The observatory.  The Agency

The kitchen.  The Agency

The bar.  The Agency