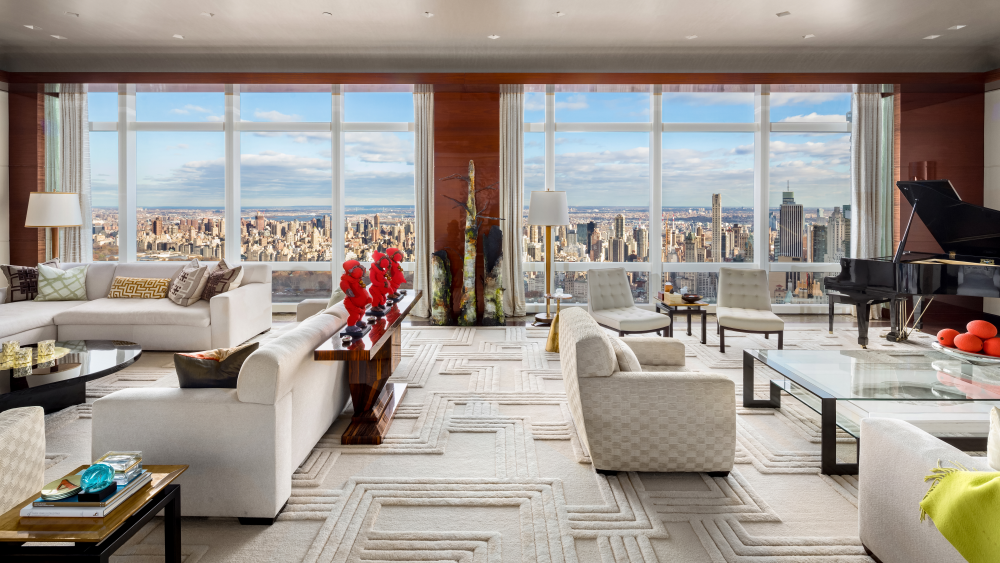 The living area at the TWC penthouse.

Related CEO Stephen Ross is relocating from the Time Warner Center, one of his company’s more storied properties, to Related’s newest prospect: the penthouse at 35 Hudson Yards. Because, after all, the only thing better than living in a luxury residence is kicking back in one you developed yourself.

That leaves the TWC penthouse at 25 Columbus Circle up for grabs—if you’ve got $75 million to spare. The 8,500-square-foot condo sits on the 80th floor, with five bedrooms and two baths, and its hefty price tag marks it as one of the most expensive properties in New York.

Ross and his wife, jewelry designer Kara Ross, are also quite the art aficionados. They tasked designer Tony Ingrao (who, not so coincidentally, also designed the interiors at 35 Hudson Yards) with transforming the apartment, allegedly before the building was even complete. The result is a space with custom flooring, moldings, cabinets and lighting, as well as a handful of art pieces from the Rosses’ personal collection. And, should the buyer be so inclined, these pieces can be included with the apartment. According to its now-former residents, the 25 Columbus Circle penthouse is the perfect backdrop for an art collection.

“Living above Central Park like this feels like you’re actually living in the park,” Kara Ross told Architectural Digest in 2015. “It’s as if you’re in a painting that’s always changing, from green to yellow to red to gray and slowly back to green again. It has a kind of power that most art can only dream about.”

In addition to artworks by Marc Sijan and creamsicle bar sculptures, the parallelogram-shaped home also features a den and library, as well as a gym and golf simulator. It’s worth noting that the latter two currently occupy bedrooms, which can be converted as per the future owner’s desires.

Still, the penthouse’s jaw-dropping views of Central Park remain its greatest asset—you’d be hard-pressed to find another vantage point quite like it. Unless of course you ask Ross, who will soon be taking in his views of the city from atop NYC’s newest mall.

Check out more photos of the 25 Columbus Circle penthouse, below: