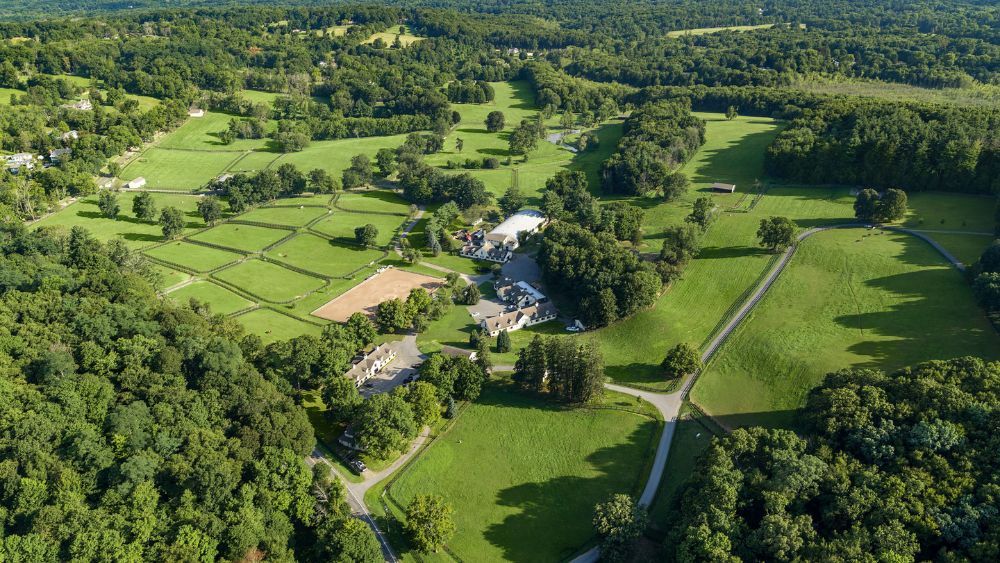 Inside this sprawling country estate, it’s the spectacular equestrian facilities that reign supreme.

Set on 214 rolling acres in Westchester County, an equine epicenter known as Sunnyfield Farm has hit the market for the first time in nearly half a century. A whopping $65 million will land a lucky buyer one of the largest privately owned properties in all of Bedford—and the priciest. Plus, it’s said to be in good company with celebs such as Glenn Close, Bruce Willis and Martha Stewart who also calling this exclusive enclave home.

Per the listing, which is held by Krissy Blake of Sotheby’s International Realty, the compound has a storied past and was first founded as a multi-discipline equestrian center by A&P supermarket heiress, Joan McIntosh. Now, the farm has long been occupied by the Nielsen family who has gone on to raise several top-notch thoroughbreds there, including racehorses that have competed in the Kentucky Derby. It’s also a commonly visited training site for Olympic equestrians and even appeared in the 1998 Julia Roberts and Susan Sarandon dramedy Stepmom, reported the Wall Street Journal.

Included in the sale of Sunnyfield are indoor and outdoor riding rings, a Grand Prix field and stalls for close to 70 horses. There’s also an adjoining trail system, a 75-acre nature preserve, access to Bedford Riding Lanes and more than 100 acres of paddocks. One of the most notable features is the yellow-colored barn, a hue that was handpicked by McIntosh and said to be based on a brand of A&P butter.

For the humans, a charming four-bedroom main house, guest cottage and staff apartments comprise the rest of the meticulously maintained property. Animals and animal lovers alike will appreciate that Sunnyfield takes full advantage of its pastoral setting, a scene that’s complete with verdant pastures, woodlands and two stream-fed ponds.

It doesn’t get more idyllic than this.

Click here to see all the photos of Sunnyfield Farm.