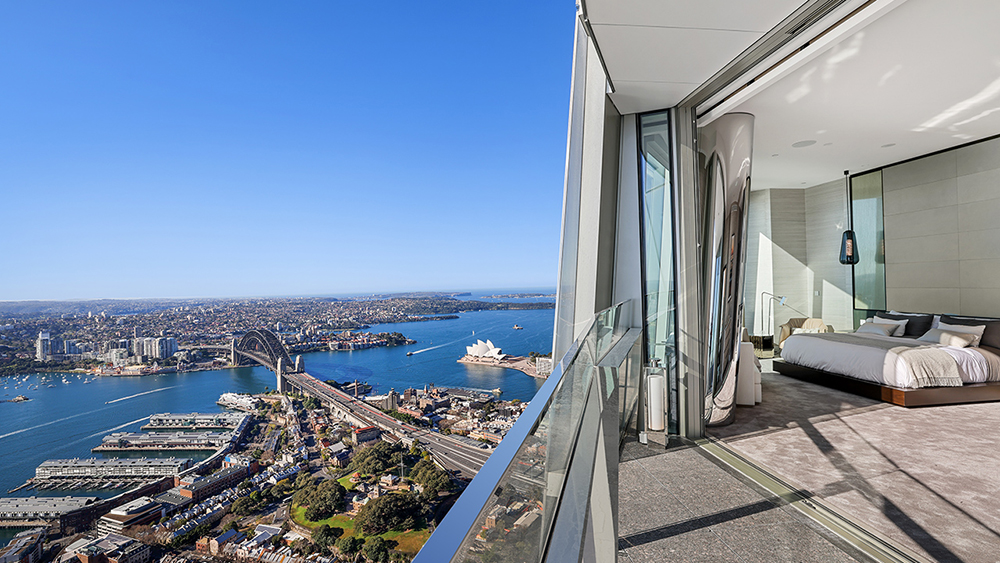 The penthouse at Crown Residences at One Barangaroo, the new Sydney skyscraper part-owned by James Packer, Australia’s media and casino mogul, has been listed for sale for AUS$100 million (approximately $73.5 million). If achieved, the price tag for the duplex crowning Sydney’s tallest building would be Australia’s highest ever for a new-build apartment.

While the 8,600 square-foot penthouse’s price and height–at 800 feet above sea level–may be spectacular, the most jaw-dropping feature is the panoramic view north to the Sydney Harbour Bridge, west to the Blue Mountains, east across the Sydney Opera House to the Pacific Ocean, and south to Darling Harbour and beyond.

The interior looks much as you might expect from a casino-adjacent penthouse party pad: a good deal of glittering glass, chrome and heavily veined black marble, with the scorching Antipodean sun pouring through the double-height windows and bouncing off every polished surface.

The unconventionally shaped living and entertaining spaces in the six-bedroom apartment come into their own at night, when the gorgeous cityscape lies at your feet. It’s absolutely made for parties, with three bars (inducing one in the master bedroom), an open-plan kitchen and a secondary enclosed butler’s kitchen behind. Three external terraces, one of which contains a private plunge pool, overlook the city.

The centrally located Crown Residences at One Barangaroo development contains 76 apartments, 11 restaurants (including a branch of Nobu) and a somewhat controversial casino. All Crown Residences are integrated into the Crown Sydney Hotel Resort below, and come with access to a 24-hour private concierge, housekeepers, valet parking and private residents’ entrances and elevators, as well as a residents-only pool with serviced cabanas, a day spa, state-of-the-art gym and tennis court. In-room dining is available from Crown’s celebrated chefs.

A desk with views of the Sydney Opera House.  Photo: Tate Martin

Whether residents will also be able to enjoy the planned “VIP gaming facilities” for which Crown is best-known in Australia is less certain. Local regulators in New South Wales recently banned Crown Resorts from operating the casino at One Barangaroo after the company admitted facilitating money laundering for Chinese high-rollers at its other Australian properties.

Check out more photos of the penthouse below:

One of the bedrooms.  Photo: Tate Martin

One of the three bars.  Photo: Tate Martin