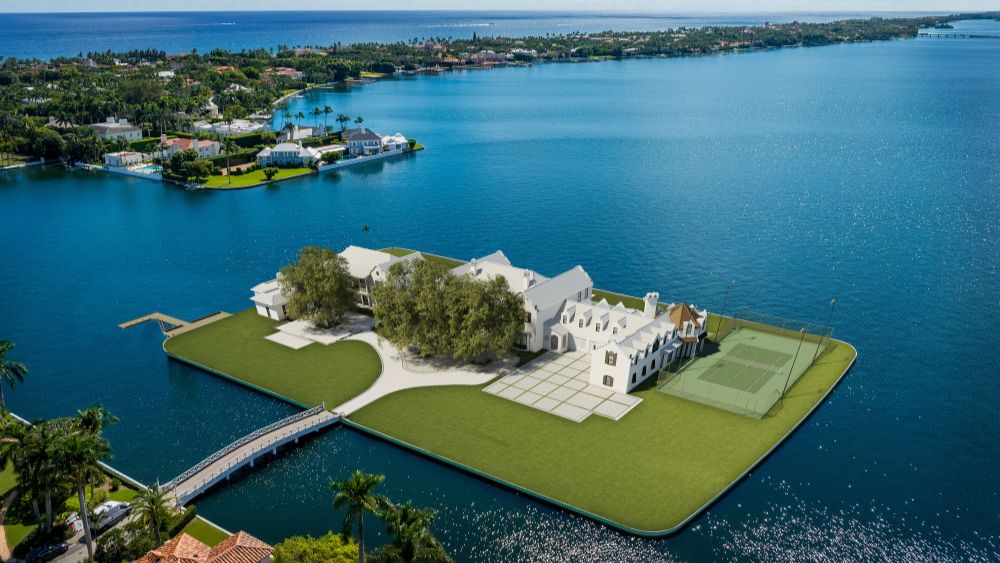 There are plenty of waterfront properties on Palm Beach’s Billionaires’ Row. But there’s only one private island in the area—and now it’s up for grabs.

The man-made Tarpon Island sits on roughly two acres and has just hit the market for a whopping $218 million—coming in at No. 3 on our list of the world’s most expensive homes for sale—up from its $210 asking price last year. The reason for the increase comes back to the property’s already existing 1930s estate, which has since been extensively renovated and is nearing completion, reports the New York Post. Originally designed by Howard Major, the mansion is surrounded by water on all sides and has been largely reimagined with additional square footage, two pools, a five-car garage and an updated, illuminated tennis court.

In July 2021, Florida-based developer Todd Michael Glaser and his partners scooped up the one-of-a-kind spread for $85 million, the first time it was sold since 1998. At the time, Glaser and local architect Roger Janseen set plans into motion to expand the British Colonial-style residence for future owners. Although, he did list the island at a discounted $125 million for buyers interested in taking on the remodel themselves.

According to the listing today, the pad has almost doubled its footprint and clocks in at an impressive 21,406 square feet. There are now 11 bedrooms, 15 full bathrooms and seven half-baths, plus a guest house. Internally, you’ll also find an indoor spa that’s been decked out with a massage room, a hair salon, a steam room and a sauna. Additional perks include a wine room, an elevator and a gym that has a weight room, a cardio room, a wet bar and its own fireplace.

If you’re wondering how you’ll keep busy on your own private piece of paradise, besides the 1,300 feet of sparkling waterfront, look no further than the 98-foot south-facing swimming pool, cold plunge, an outdoor kitchen, bar and two private docks. Considering the property is only accessible by boat (or a narrow bridge), the last should come in handy. There’s also a library inside the main house, along with an entertainment room that’s been tricked out with a wine fridge, a fireplace, a billiards table and a movie lounge. Obviously, the best part is that you’ll have Tarpon Island to yourself.

Click here to see all the photos of Tarpon Island.