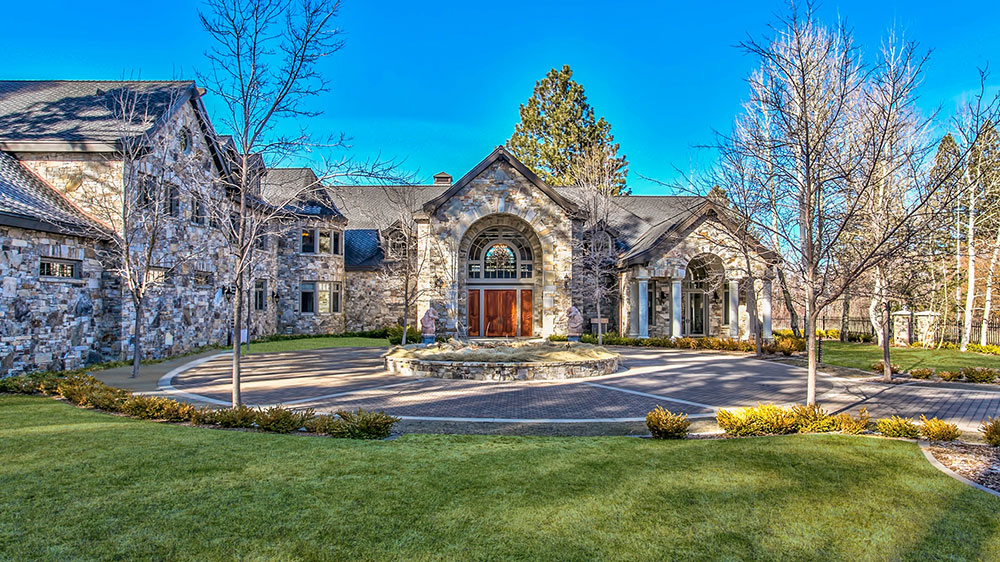 Fans of the long-running TV series Bonanza might recognize the view from this spectacular Lake Tahoe estate in Nevada.

The NBC show’s opening sequence showed the characters galloping along a trail with the lake and snowy-topped Sierra Nevada mountains in the background. It was filmed right here on what was then open grazing land, before this sprawling 16,700-square-foot lakefront home was built in 2004.

Sitting on eight wooded acres on Lake Tahoe’s coveted Zephyr Cove, the imposing two-story house, constructed using more than 400 tons of Montana blue stone, has 278 feet of prime sandy beachfront and comes with its own private pier and gazebo.

Owners George and Clare Schmitt—George recently retired as CEO at Florida telecommunications company xG Technology—first listed the home in 2016 for an impressive $59 million.

That price, however, included an adjoining 23-acre equestrian center with wide-open meadows where the Bonanza intro was shot. The center also has a 14-stall stable, paddocks, a rustic 1,450-square-foot, two-bedroom caretaker’s cottage and its own stretch of beach.

During their time at the estate, the Schmitts were avid breeders of race-winning thoroughbreds. A number of their their steeds were California and Kentucky Derby qualifiers. Hence the equestrian center.

But after no takers for the expansive property at the $59 million asking— one undisclosed, high-profile buyer reportedly went to contract, but later withdrew—the estate has now been divided up and the price reduced.

“Properties of this caliber on Lake Tahoe, with this much unobstructed access to the water, are exceptionally rare,” says Sierra Sotheby’s International Realty agent, Lexi Cerretti, who holds the listing.

“Finding something like this, especially with the option of so much adjoining land, really is akin to striking gold in the nearby Sierra Nevada”.

Designed very much with entertaining and family fun in mind, the main house comes with eight bedrooms, nine full bathrooms, and has an adjoining 1,500-square-foot, two-bedroom guesthouse with full kitchen and four-car garage.

Entertainment options include a movie theater, a 3,500-bottle wine room and tasting area, a games room with a fireplace and bar, a craft room, and a gym with a steam room.

Or you can simply kick back on the home’s huge deck, gazing at the sapphire-blue lake and the distant mountains. For ski-lovers, Heavenly Mountain Resort is just a few minutes away.

According to Sotheby’s Lexi Cerretti, the Schmitts own another property in the San Francisco Bay Area and, with their children grown, they’re looking to downsize and spend more time away.

For the owners, a sale at either $39.9 million, or a combined $50 million would definitely be a bonanza.