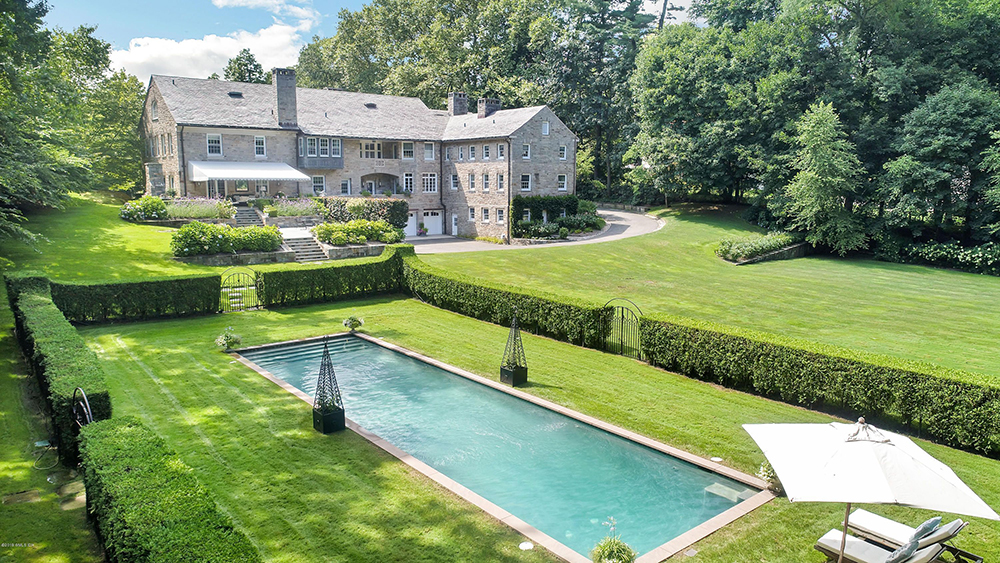 When your home was built by the man behind such construction marvels as New York’s Empire State Building, the Flatiron Building and the Plaza Hotel, you can be pretty confident it’s going to stand the test of time.

“Many of the walls are two feet thick, and heavily reinforced with steel, just like the Empire State. It’s more like a fortress,” says Julie Church, real estate specialist with brokers Houlihan Lawrence, who holds the listing. “It was definitely built to last.”

In addition to his work with the Empire State, Starrett was also behind such landmarks as Manhattan’s Penn Station and Macy’s department store and in Detroit, Ford’s Rouge River plant and the Lincoln Memorial in Washington DC. His achievements were immortalized in the 1938 autobiography Changing the Skyline.

Over the years, his Greenwich home has been refurbished and refreshed. But it wasn’t until the early 2000s that it was given a complete makeover by well-known hedge-funder and passionate art collector David Ganek, and his author wife, Danielle.

The Ganeks, who bought the manor in 1999 for a reported $3.37 million, updated everything: from creating a state-of-the-art kitchen, new bathrooms, a handsome library with four walls of bookcases, a wine room, to two offices and a gym.

“What is truly unusual about the property is its setting on almost three acres just minutes from the center of town. That is exceptionally large for this part of Greenwich,” says Church.

Original architectural details have all been preserved.  Courtesy of Houlihan Lawrence

Surrounded by dense woodlands, the home is reached via security gates and a long driveway leading to a large motorcourt. The driveway curves down to the rear of the home with its three, basement-level garages.

Stately front doors lead into the main foyer with its wood-paneled walls and sweeping staircase. Hallways flow into an elegant reception room and wood-paneled study with marble fireplace.

The kitchen comes with professional-grade appliances, acres of countertops and a central island for casual dining. A breakfast room and formal dining room are steps away. Off the living room is a sunroom with six sets of doors that open out on to a covered veranda and huge patio.

The staircase leads up to the bedroom floor with its expansive master suite that includes a spa-like bathroom with oversized black marble tub. Here there’s also an equally vast walk-in shower, loungers for relaxing, dual walk-in closets and a private balcony.

On this floor there are four additional ensuite bedrooms plus an office. More stairs lead up to the third floor set in the gables of the home, housing three more bedrooms, a fitness studio and a massive 46-by-14-foot storage space.

Out on the manicured, lush grounds is grass-edged pool artfully framed by tall hedges and a stand-alone stone pool house with powder room, shower, kitchen-living space and, naturally, a fireplace.

Houlihan Lawrence’s Church says there’s already been keen interest in the home, with the majority of the hand-raisers being young, affluent New Yorkers seemingly eager to move out of the city and work from home rather than an office.

There’s also interest in the home’s attractive asking price, which reflects the ups and downs of the Connecticut market. The current owners reportedly bought the estate in 2006 for $9.8 million and now have it listed for that $8.295 million, a 15.4 percent loss.

“The market is strong right now, with lots of multiple bids, especially from young families bringing forward plans by four or five years to move out of the city.”

And for those who have to head to the metropolis, the home is well-positioned, being minutes from the I-95 Connecticut Turnpike, and just six minutes from Old Greenwich rail station.

As for stepping off the train, looking up at the Empire State and knowing its builder built your house? Priceless.