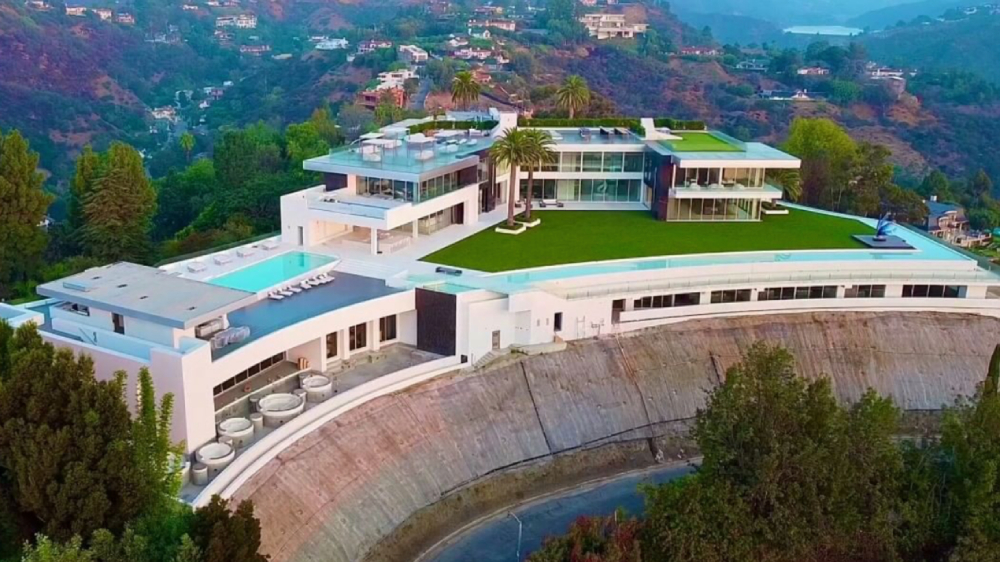 After more than eight years in planning and construction, the Los Angeles area’s most colossal home is finally ready for its official public debut. Famously known only as “The One,” the mini shopping mall-sized estate straddles one of the highest promontories in Bel Air, spanning about 100,000 square feet of total living space. By comparison, the White House weighs in at just under 55,000 square feet; the 115-room Hearst Castle makes do with a modest 68,500.

It’s difficult to grasp the sheer size of “The One” by just looking at the pictures or numbers, although it’s clearly massive. To appreciate the project’s full scale, go for a walk. The mansion stretches for a full quarter-mile along Stradella Road in Bel Air, looming over the street like a big white alien spacecraft. As for the property’s main driveway, set on a quiet cul-de-sac known as Airole Way, it’s long and wide enough to put most public roads to shame.

The palatially palatial extravaganza is the personal chef-d’œuvre of Nile Niami, arguably L.A.’s most famous — and famously bombastic—developer of ultra-high-end mansions, the snazzy contemporary kind seen in magazines and bought by billionaires. The San Fernando Valley native first came to prominence about a decade ago designing Hollywood Hills homes in the $20 million range; he’s since graduated to bigger and brasher projects, selling them to the likes of Diddy, Floyd Mayweather, Calvin Klein, and the Winklevoss Twins.

All of that has culminated in “The One.” Niami bought the eight-acre promontory in late 2012 for $28 million from Rita Kogan, the late video game heiress and daughter of “Space Invaders” creator Michael Kogan. He quickly razed the existing estate, a large midcentury modern mansion in woefully neglected condition, and has since spent many tens of millions more bringing his spec-house to life.

In 2015, Niami gave GQ his very first public interview about the property, revealing he planned to ask $500 million for the Paul McClean-designed compound once completed. The 52-year-old developer promised the house would have a room exclusively dedicated to tanks of live jellyfish, a room for storing fresh flowers, a perma-frozen room with an ice bar, and a room for candy. Naturally, there would also be an in-house nightclub.

A sculpture in one of the home’s grand spaces.  Instagram

Some of those expectations have been tempered. The jellyfish room proved too costly and impractical; it was ultimately scrapped. Ditto for the fresh flowers, the ice bar, and the planned catering kitchen. The nightclub and the room with candy walls remain, however, as does a 50-car garage—sans the planned car turntables—a four-lane bowling alley, and an Olympic-sized indoor swimming pool with lounge decks. There are outdoor swimming pools, too, no fewer than five of them, all infinity-edged. The mansion’s interiors, like all of Niami’s prior projects, were designed by Kathryn Rotondi of KFR Design.

In keeping with the interior revisions, the asking price has received a big haircut. Although the exact number hasn’t been officially released, and the agents involved remain cagey, rumors say the modified ask is “only” now about $340 million, a nod to budget reductions and reality. That more sober number is a boon for Niami, who has faced recent financial woes, including foreclosure proceedings on other projects, per previous reports.

Still, the rumored price tag is still double the most expensive home transaction in California history, the $165 million paid by Jeff Bezos last April for David Geffen’s 8-acre Beverly Hills estate. It’s also $100 million more than the country’s most expensive home deal of all time, the $238 million Ken Griffin paid for his New York penthouse in 2019.

For that, buyers will receive a glass-walled contemporary showcase with a cinema-quality home theater, a beauty salon, and an Olympic-sized indoor swimming pool with lounge decks. At 6,000 square feet, the master suite is bigger than many suburban McMansions; it includes its own private swimming pool and at least two bedroom-sized dressing rooms, both of them lavish enough to put any Rodeo Drive boutique to shame. There’s also a 50-car garage, a four-lane bowling alley, and a sky deck with a putting green.

Opinions remain divided about the architectural merits of “The One.” Some say the futuristic style will stand the test of time. Others claim it looks more like a swollen asylum or hospital—or a rigidly geometric residential white elephant, for that matter.

In 2015, Niami claimed the house was being built with a “very specific buyer in mind,” although who that buyer actually is remains unclear. Also murky is who would want to purchase a mega-conspicuous residential complex of this scale and magnitude—even at the lowered $340 million mark, it’s still far out of reach for many billionaires. Previous reports have indicated Niami plans to focus on new money tech tycoons á la Jan Koum, who sold WhatsApp to Facebook and has since spent more than $300 million on luxury California real estate, and Honey founder George Ruan, who sold out to PayPal for $4 billion and subsequently assembled an $80 million Bel Air compound. There are also the more usual suspects, too—Saudi and Emirati sheikhs, and big crazy rich money from Hong Kong, Taiwan, and Mainland China. Should any of them happen to be searching for biggest and baddest compound in all of Tinseltown, well, there’s really only one.

“The One” is being co-marketed by Branden and Rayni Williams of The Beverly Hills Estates and Aaron Kirman of Compass. Vesta custom-designed the furniture of the mansion.