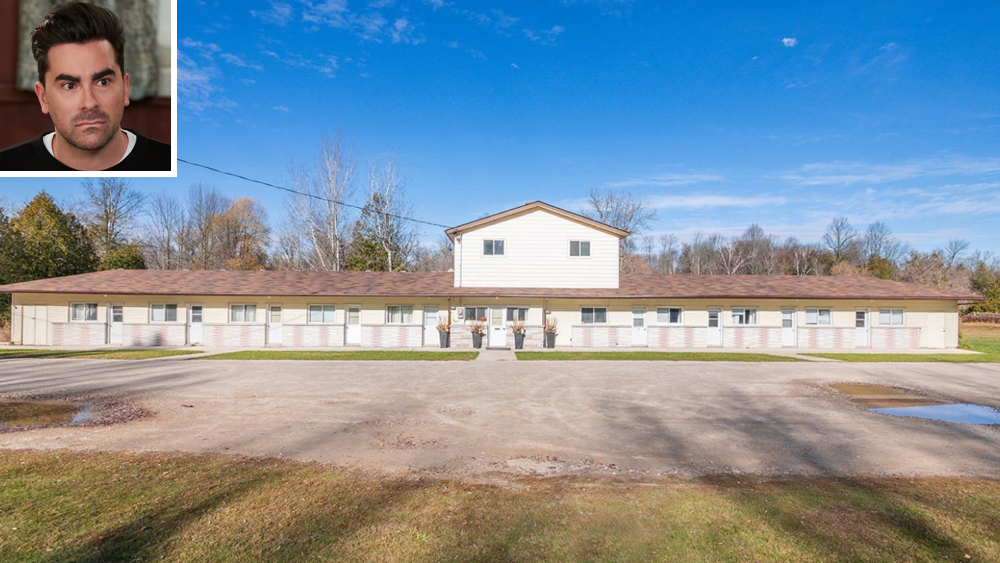 Schitt’s Creek may have aired its final episode almost a year ago, but the Pop original series is still attracting leagues of new fans (aka Schittheads) thanks to its availability on Netflix, as well as continually racking up awards (it is nominated for five at the upcoming Screen Actors Guild Awards, including Outstanding Performance by an Ensemble in a Comedy Series). And now, the property that masqueraded as the Schitt’s Creek Motel/Rosebud Motel throughout the show’s six-season run has hit the market! For a cool $1,591,561 (CAD 2,000,000), you, too, can make like David (Dan Levy), Alexis (Annie Murphy), Moira (Catherine O’Hara) and Johnny Rose (Eugene Levy) by forever checking in to the moderate digs. (Business center, hammam spa and extra towels not included.)

Located at 308399 Hockley Rd. in Mono, Ontario, about 50 miles northwest of downtown Toronto, the property’s listing is held by Robin McLuskie of Colliers. Known as the Hockley Motel, the structure was operating as housing for Canadian basketball recruits when it was pegged for its starring role on Schitt’s Creek in 2014. (Denver Nuggets’s player Jamal Murray and the Spanish Liga ACB Fuenlabradas’ Kyle Alexander both lived on the premises for a time!)

Built in the 1960s, the lodging sits tucked away on a 6.7-acre parcel that abuts the Nottawasaga River. Said to consist of nine rooms on the show, the 4,300-square-foot property is actually comprised of six apartment-like units with kitchenettes and baths, as well as a two-story, three-bedroom, one-bath space that serves as a manager’s suite.

There is also a 700-square-foot detached guest cottage, a mobile home with a Florida room and a three-stall horse barn on the grounds. Per Redfin, the site includes an upgraded septic system, as well, so feel free to insert your own “Schitt” jokes here.

The listing describes the place as being “non-operational,” but, according to iHeartRadio, current owner Jesse Tipping, who snapped the place up in 2012 for $820,000, “would love to see the property’s next owner turn it into a Schitt’s Creek-themed motel as a tribute to the show.”

Details about the site’s history are scant, but Tipping told Orangeville.com he thinks the structure initially operated as a “party spot” or a resort and that at one point the grounds boasted a swimming pool that has since been filled in.

The site, which went by the name of Hockley Retreat Centre for a time, was first featured in Schitt’s Creek’s pilot episode, in which the wealthy Roses find themselves in financial ruin after falling victim to a fraudulent business manager. Displaced from their mansion, the family is forced to move to the only asset the IRS didn’t seize, a small town named Schitt’s Creek, which Johnny purchased years prior as a joke and where Mayor Roland Schitt (Chris Elliott) has secured them two rooms at the local roadside motel.

The lodging went on to appear in every episode that followed, providing a perfect backdrop for the quirky series and the quirky little town that figures at the center of it.

Of choosing the Hockley Motel for the show, executive producer Andrew Barnsley told the Orangeville website, “The building itself really matched what was in the mind’s eye of the creative team. It was just a location that worked perfectly for us.”

Production designer Brendan Smith further explained to the Location Managers Guild website, “Dan [Levy, who co-created the series with his father, Eugene] had a very clear view of the show and a clear understanding of the characters within it—their tastes, their style, their history. The locations simply had to cater for this and work along with it. The motel was a good example. It just felt like the right one, almost as if it had the right ‘character.’”

Fun fact—according to Levy, the “colorful bricks” that dot the motel’s exterior were handpainted by the Schitt’s Creek production team prior to shooting there.

Smith goes on to say, “For me, the biggest challenge to bringing Schitt’s Creek to the screen was making it interesting, a little quirky. Even though the Roses initially hate the town and can’t wait to get out of it, it still had to have some charm. We knew it would grow on the family so we wanted it to be likeable. The recurring locations—the store, the motel, even the street in the town—should make you want to go back to them. There’s a kind of coziness to old locations. You feel at home in them.”

He certainly succeeded on that front. Not only did the Rose family eventually fall in love with the town, but audiences did, too. Hockley Motel is easily the most identifiable of all the Schitt’s Creek locations and, as such, attracts leagues of fans each day, something Tipping welcomes. He told Orangeville.com, “We just kind of let them enjoy it because if they are not bothering anybody, people really get a kick out of it.”

Cast and crew took over the property for a couple of weeks each year to complete exterior motel scenes during Schitt’s Creek’s run. Filming always took place in June because, as Smith explained, “We like the green foliage and even though we are Canadian, we don’t like to be out in the cold that much.”

Though the Rose family is shown to inhabit rooms six and seven on the series, the production actually made use of the units labeled five and six (at least during the first season – they tended to play a bit fast and loose with the spaces utilized in the years that followed, as comprehensively detailed by I’m Obsessed With This).

Only the exterior of the Hockley Motel appeared on Schitt’s Creek. All scenes involving the interior of the Rosebud were filmed on a set that was initially built at Pinewood Toronto Studios, then at Dufferin Gate Studios and finally at Revival Film Studios, according to the Location Managers Guild. Outside of their basic layout, the property’s actual rooms do not resemble the spaces the Rose family called home in the slightest, as the MLS photos attest to.

In real life, the Hockley Motel’s office is part of the manager’s suite and, while it does boast a front reception area with a staircase, it, too, looks much different than what was depicted onscreen.

The lodging counts a few other credits to its name. Serial killers Leland Jones (Stephen McHattie) and Billy Orser (Greg Bryk) check out of the motel at the beginning of the 2005 thriller A History of Violence.

Jake Epping (James Franco) confesses his time-traveling mission to Bill Turcotte (George MacKay) there in the episode of 11.22.63 titled Other Voices, Other Rooms, which aired in 2016.

And in 2019 the motel played the Rain Quail Bed and Breakfast, where Hazel (Cameron Britton) dropped off Agnes (Sheila McCarthy) in the season one episode of The Umbrella Academy titled I Heard a Rumor.

Don’t have an extra $1.6 million laying around to purchase the locale? I totally get that. But don’t worry (it’s his sister!), you can still experience it virtually via this YouTube tour.

And to whoever winds up purchasing the Hockley Motel, I love that journey for you!

Until next time, Happy Stalking!

Stalk It: The Rosebud Motel from “Schitt’s Creek” is located at 308399 Hockley Rd. in Mono, Ontario.