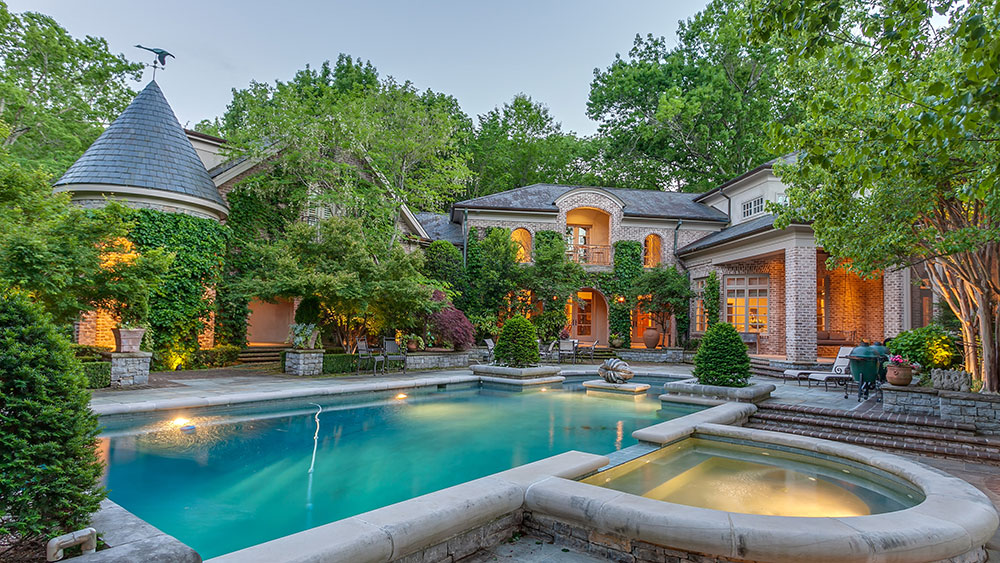 Back in 2012, this sprawling 20,500-square-foot estate in the tony Belle Meade neighborhood of Nashville was used as the home of the Faith Hill-esque singer, played by the talented Connie Britton.

After months of filming in the home—you might recognize the brick-walled kitchen, the entryway with its magnificent three-story floating spiral staircase, and huge master bedroom—the producers switched locations, painfully recreating the rooms in a 3,300-square-foot soundstage nearby.

Alas, not even the notoriety of its Nashville star-billing has helped bring in a buyer for this exceptional estate, known as Grande Belle Meade. After being first listed in 2010 for an ambitious $22.5 million, it dropped to $19.5 million with the debut of the ABC show, then to $18 million in 2016.

After one more go at $15.99 million in May this year, the price has just been lowered to $14.975 million, and real estate heavyweights Engel & Völkers were brought in to add some marketing muscle.

Even without the Nashville connection—the show ran for six seasons and 124 episodes before wrapping up in July last year—Grande Belle Meade is an impressive property.

The longtime owner, tireless Nashville philanthropist Sylvia Roberts, has used the home to host lavish fundraisers for some of the biggest names in politics and show business. Singer Paul Simon recently did a special Phil Everly tribute in the entryway; Jackson Browne, Big N Rich and Florida Georgia Line’s Brian Kelley have all crooned out by the pool at various events.

And if the home’s jaw-dropping, two-story stone entryway looks vaguely familiar, it was used by Skittles for Aerosmith’s Steven Tyler and his “The Portrait” Super Bowl 50 commercial in 2016. Google it, it’s still hilarious.

Completed in 1999, the main Georgian-style house was designed by Mark Harrison of architects to country music stars, Adkisson/Harrison and built by Will Andrews. The interior design is the work of Mary Spalding who imported rare woods, stone and marble from around the world. She even sourced a mantel from a former Versace property.

The home itself features six bedrooms and 10 bathrooms and sits on six wooded acres minutes from downtown Nashville. It’s also right next to the rolling Percy Warner Park, with its golf course and hiking, biking and horse-riding trails.

A winding quarter-mile driveway starting at a gated entrance off Park Road, leads to a porte cochere and driveway capable of accommodating up to 300 cars—Roberts throws big parties.

And this is a house made for entertaining, with that vast 45-foot-long, cathedral-ceilinged entry, a dining room with seating for 50, a huge wood-beamed kitchen with industrial-grade appliances, a cigar room, 3,500-bottle brick wine cellar and movie theater.

On the substantial grounds, there’s a pool and pool house, an outdoor fireplace, a two-stall horse barn, guesthouse and expansive manicured lawns.

But anyone in a rush to buy may have to negotiate the timing with the owner. Already in the 2020 Nashville social calendar is a $500-a-plate fundraiser for the Nashville Ballet that Roberts is holding at Grande Belle Meade in February. She wouldn’t dream of canceling.

The steps to the outdoor living room.  Photo: Courtesy of Engel & Vöelkners Nashville