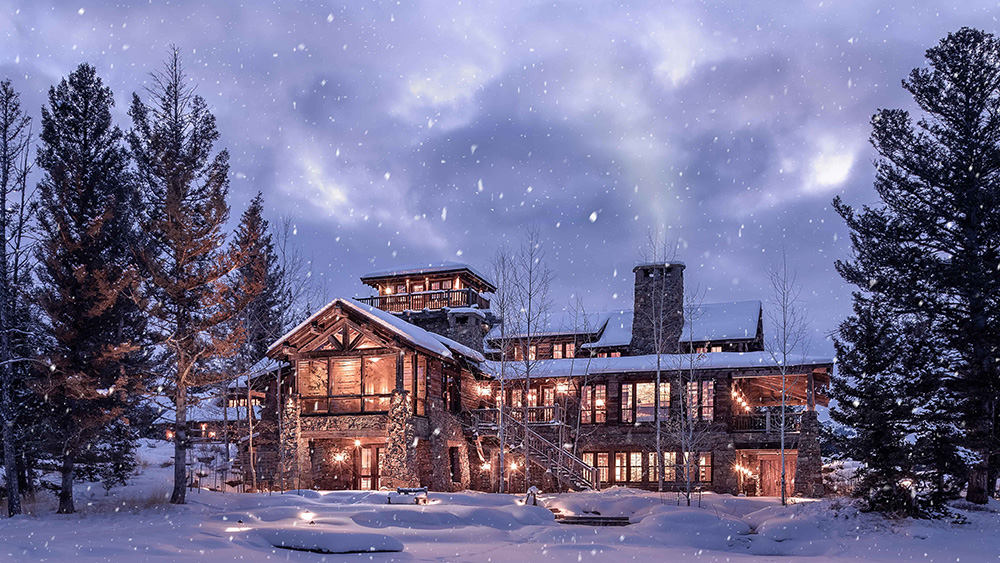 Maybe strap on your snowshoes and explore the miles of powdery trails that meander through the home’s 160 wooded acres. Or master the moguls at nearby Big Sky ski resort.

Greathorn Lodge was the dream of a local family to create the ultimate  retreat for large family gatherings. In the eight years it took to build—it was completed in 2008—no expense was spared.

All the rough-hewn timber used in the exterior and interior was reclaimed, and every nail handmade by local artisans. All the stonework is locally sourced Montana Moss Rock. Wood cabinetry and ironwork is also the work of local craftsmen.

The property is an hour’s drive from Bozeman airport, and just five miles from the private ski paradise of the Yellowstone Club, and just over three clicks to the Spanish Peaks Mountain Club where ski legend Bode Miller just bought a home.

A long, winding gravel road leads to this lodge with its dramatic stone facades, multitude of covered decks and magical rooftop lookout with its wrap-around terrace.

Spread among the 16,000-square-feet of accommodation are eight en-suite bedrooms, numerous kids’ bunk-rooms, cozy retreats with roaring fireplaces, an intimate dining room with seats for 12 and a game room with pool table and a well-stocked pub-like bar.

Every nail used in the construction was handmade locally.  Photo: Zachary Grosfield

Climb a wrought-iron spiral staircase, or take the elevator up to that rooftop lookout and gaze at the jaw-descending views of the towering 11,000-foot Spanish Peaks and jagged Gallatin Range in the distance.

For apres-ski entertaining, the double-height, open-plan kitchen comes with an adjoining wine cellar with a stunning brick ceiling and separate pizza room with wood-fired oven.

One of the highlights of the home is the master bedroom with its massive wood beams, pitched roof, aged wood floors, huge stone fireplace and doors leading out on to a terrace with full mountain views.

The wrought iron of the stairway to the lookout was also forged by local artisans.  Photo: Zachary Grosfield

As for having fun outdoors, the grounds feature a number of stream-fed ponds. The largest is perfect for ice skating in the winter, while another comes with its own sandy beach for summer swimming or paddle-boarding. The Galton River, one of the world’s Blue Ribbon trout streams, is close by for perfecting your fly-fishing skills.

Johnson points out that while the home is up in the mountains, its elevation is under 7,000 feet, so there are no problems with the effects of altitude.

And when you’re ready to relax after a long day skiing or boarding, the home comes with an outdoor hot tub, and indoor spa with sauna and over-sized steam shower. There’s even a well-stocked gym to stretch out those quads.

“One of the most appealing features of the home is that it’s move-in ready. All the furniture and furnishings are included. Just fly in and enjoy. All you need to bring are your skis,” adds Johnson.