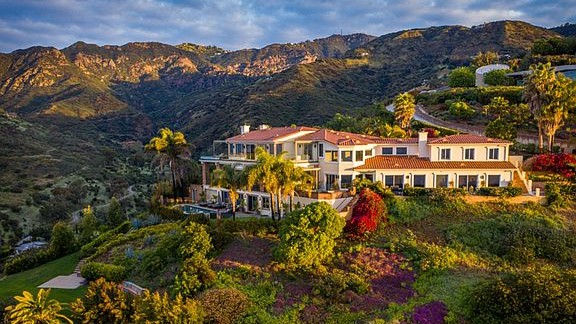 Built by Craft Recordings president Sig Sigworth in 2001, this Malibu mansion with its state-of-the-art recording studio has played host to dozens of recording artists over the years: from Rihanna and Justin Bieber to Tupac and Justin Timberlake to 20 more grammy-winning musicians.

Nestled into a hillside in eastern Malibu’s Santa Monica Mountains with inspiring views of the ocean, the estate, called Villa Pacifico, also offers the ultimate in privacy, with a guarded-gate entrance to its small community. And it’s high enough up the mountain that few paparazzi would ever attempt the hike. It’s just down the road from Soho House’s Little Beach Club and Nobu.

The 8,200-square-foot home sits on 10-plus acres and has seven bedrooms and nine baths, as well as a chef’s kitchen, wine cellar, great room, screening room, a gym and all the other little extras you want in a palatial beachside spread. Access to the members-only La Costa Beach Club and tennis courts, just down the road, is also included.

Professional landscaping surrounds the pool and spa and several outdoor entertainment spaces, from the patios to the cabana—perfect for intimate and large gatherings (when the time comes) or just for breaks between recording sessions.

Plenty of hiking trails are nearby in this lush part of Malibu, untouched by the fires of three years ago, but the hike we think you might enjoy most is the one up from your private helipad to the patio. So even when the Pacific Coast Highway is jammed with cars, you can fly over it all and land in LA, wine country, the Sierras or wherever your whims take you, traffic be damned. There’s also parking for 4-plus cars, for those jaunts that don’t require air time.

The one thing the home doesn’t include are reservations at the ever-popular (even in a pandemic) Nobu. But we bet the broker team of Nest Seekers International realtor Shawn Elliott and Dylan Eckardt who hold the listing can help fight that battle for any serious buyers.

Even the breakfast nook has killer ocean views.  Courtesy of Nest Seekers International

Steps lead down to the private helipad.  Courtesy of Nest Seekers International